by Rich Walton
in Bowhunting Posts
0 0
A A
2

The sun has set on yet one more great who helped make the archery industry what it is now: We sadly say goodbye to Jim Pickering.

Jim, 72, passed away peacefully at home surrounded by his family on February 23, 2012 after a long battle with cancer. He was born on March 24, 1939 to Clarence A. Pickering and Thressa Bills Pickering.
He participated and won many state and national archery tournaments since 1957. He was an avid bow hunter with his trophy animals consisting of moose, mule deer, elk, caribou, bear, cougar and Javalina. Jim was inducted into the Archery Hall of Fame December 5, 1987. He was a member of Datus Archery and Beehive Wasatch Bow Hunters. 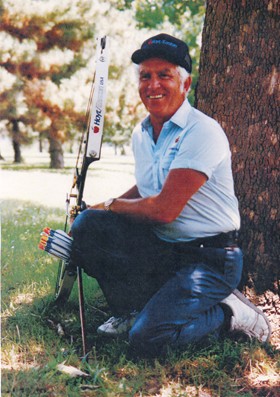 Jim was employed by Bear Archery, Carroll Archery and Hoyt/Easton. After retiring he started a company with his son-in-law Rodney Park. Pick’s INC. DBA Pick’s Roll Off Containers in 1998 which has become very successful and will remain being run by family. His influence and honesty has made a mark on many peoples’ lives; his benevolent spirit and love will continue to live on in all of the lives that he touched on a daily basis, and he will be missed greatly by all who knew him.
Jim married Donna Hilton Pickering on June 28, 1957. Their children are: Gary (Roxanne), Tina, Chris Allen Pickering (deceased), Kelly (Kristie), Lisa (Rodney) Park, Darrin (Angela) Frisch, and grandchildren: Jason, Steven, Pam, Chris, Jeff, Ashley, Mikey, Colten, Shaylee, Kelden, Makayla, Jayden, Josh, Jessica, Tanner, Brooklyn, and great-grandchildren: Dante, Evelyn, Levi and Kami.
Funeral services will be Wednesday, February 29, 2012 at 11:00 am at Larkin Sunset Gardens, 1950 East 10600 South, Sandy where visitations will be Tuesday, February 28, from 6-8 pm and Wednesday 9:30 to 10:45 am prior to services.

Our condolences go out to Jim’s family.