Big Bear’s of the East

by Bob Humphrey
in Bowhunting Posts
0 0
0 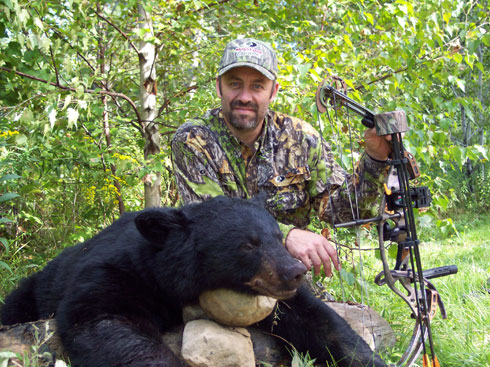 Newfoundland’s spring bear hunting rivals that of the western provinces, but is less than a day’s travel from most of the eastern U.S.

Some of Canada’s best, and most underrated bear hunting lies in the easternmost province of Newfoundland.

For most bowhunters, mention of spring hunting for trophy-class bears conjures up images of western Canadian provinces like Alberta, Saskatchewan and British Columbia. Many are surprised to learn that similar hunting prospects exist on Canada’s east coast, in Newfoundland. That surprise becomes even more pleasant when they learn how affordable those hunts can be.

According to the Department of Tourism, Culture and Recreation, Newfoundland’s bear population is estimated at 10,000, reportedly the densest in North America and well-stocked with trophy-class animals. The largest on record weighed 687 pounds and specimens in the 350-400-pound range are common. Anything over 300 pounds is almost a sure bet for Pope & Young.

Newfoundland’s bears are also largely unexploited. The provincial government limits the number of bear permits they issue for each zone. Most residents consider them a nuisance, and leave them for nonresident hunters. Randy Parsons of Owl’s nest lodge says, “More than 50 percent of our hunters are bowhunters, and we have some weeks when we’re exclusively bowhunting.”

Outfitters seldom hunt any one bait for more a week without a break, and often don’t hunt the same areas in consecutive years. Each outfitter’s territory covers a large area, parts of which are inaccessible, leaving plenty of “Bear reservoirs” to continually recharge the lightly-hunted areas.

Spring hunting is almost exclusively over bait as this is the most effective method, especially for a bowhunter. Newfoundland’s spring season typically runs from early May through mid July with similar success rates throughout.

There are few certainties in bear hunting; but one is bugs. They’re at their peak this time of year and hunters traveling north should be prepared. Bug suits are one option, but the best all-around repellant is a ThermaCELL. These little propane-powered devices are about the size of a hand-held GPS unit, and they work without giving off any odors that might alarm game, creating a bug free zone around you.

Air Canada and its U.S. partners run regular flights into Deer Lake and Gander, Newfoundland, and flights are five hours or less from Boston, Atlanta, Chicago, Detroit, Minneapolis or Newark. You can also take a ferry from North Sydney, Nova Scotia to St. John’s, Newfoundland.

Regulations prohibit hunting the same day you fly, and many flights arrive late. Outfitters recommend you fly in a day before your hunt, and spend the night in town. You may also want to allow extra time to do a little sightseeing and fishing.