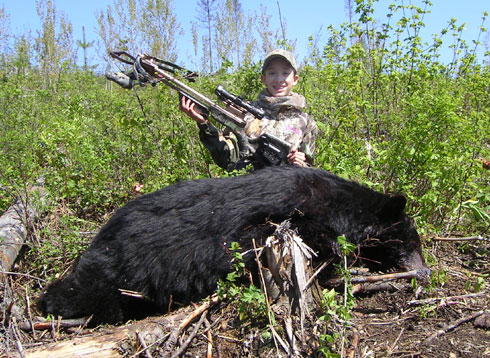 Michal with his fourth black bear.

Sponsored by: Dead Down Wind

Hunting in British Columbia, Canada for the past 12 years, I now take my youngest son Michal with me on my spring black bear hunts. It is a great place to introduce him into the hunting arena. He has already taken three black bears and three wild boars, all before he was 12 years old. On this hunt, I challenged him on taking a black bear using a crossbow.

We are hunting with Steve Saunders owner of Sentinel Mountain Safaris. Kids between the ages 10 to 14 hunt free with a paying adult. In the real hunting world, this figures out to be a full price hunt for half price or another way to look at it, two hunters taking two bears for one-half price each. If you chose to hunt with Steve at Sentinel Mountain Safaris, you will take a bear. Steve goes out of his way to make sure a nice bear (usually a bear measuring six and a half feet or bigger) will be taken. I have taken several bears over seven feet and on one hunt I shot a monster black bear that measured eight feet six inches. 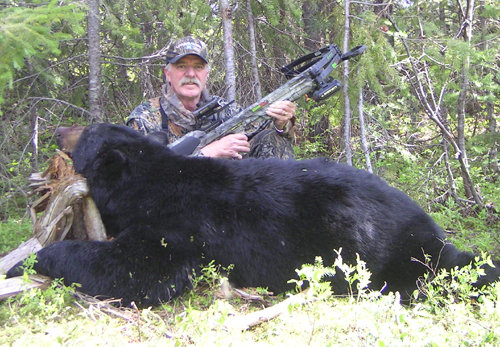 The hunting concession is located near Bear Lake in British Columbia, the name Bear Lake is very appropriate to the name “bear” because the animals are everywhere. The concession covers 2,250 square miles. Bear Lake is approximately 30 miles north of Prince George on the Al-Can Highway #97. This intriguing area with it beautiful landscape and tightly woven underbrush is well populated with an over abundance of wild animals. This animal rich environment includes black bears, grizzlies, moose, elk, mule deer, white tail deer, wolves and coyotes. In addition, it includes wolverine, lynx and martin to name a few.

The crossbow he will be using is a TenPoint GT Flex. He took his first wild boar using this crossbow. The model was new on the market at the time and he was the first person ever to take an animal using the GT Flex. TenPoint sent him an official certificate claiming the right to be the first.

The GT Flex is a recurve crossbow and can be adjusted to three different draw weights, 90 lbs that is great for a training crossbow for youngsters and the first-time shooters, 125 lbs that transforms it into the perfect recurve for turkey hunting and bow fishing, or 180 lbs which now becomes a lethal big game crossbow. Knowing that black bears can be tough and tenacious, we set it at 180 lbs, this would prove to be a good choice on our part. At 180 lbs, it delivers the arrow at a speed of 300 feet per second.

Spring black bear hunts with Sentinel Mountain Safaris has always been an exciting hunt. Seeing so many black bear in one day will sometimes cause confusion because most hunters want to take the first bear they see. Spring black bear hunts are always 100 percent. Over the years, it has only been one occasion that I took a black bear on the first day. It was a nice color phase boar, measuring close to seven feet. Being a two bear area I had purchased two tags thus not ending my hunt after taking the first bear. On moose hunts, they will let you take a black bear at no extra charge. You will have to purchase a bear tag and pay the royalty. British Columbia also has a high population of color phase black bears.

To the east, you can see the Rocky Mountains covered in snow; they look majestic as they reach high into the heavens above from the valleys far below. The areas we hunt have many cut blocks and are an excellent place to check for feeding bears. Most logging roads go from one cut block to another. You will pass-by many lakes and follow creeks that wind their way through the thick bush. Beavers are often seen swimming near their dams, checking for running water. Beavers dislike the tone of running water. The acronym of “busy as a beaver” will be prevalent as they work on their dams until eliminating all unnerving sounds. Beavers cause big problems in British Columbia, in a few places water will be over logging roads. Trappers have a never-ending job separating the beaver from the dam.

On the first day of the hunt, we saw six black bear, one grizzly and three moose. One of the black bear was over six feet but spooked as soon as we started the stalk. I explained to Michal that we would need to get within 40 yards before taking a shot. Last year he had shot one of his bear at 106 yards using his muzzleloader. I had explained to him, this was going to be a different hunt, needing to get within crossbow range would be exciting and a challenge. 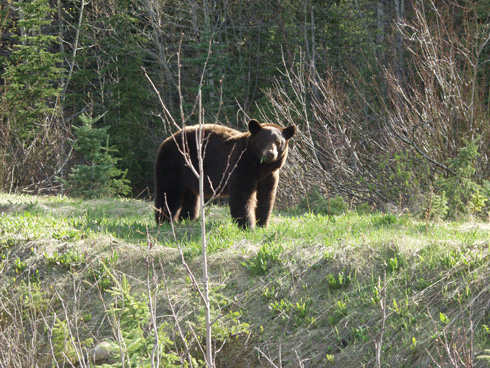 We always use Dead Down Wind products to our advantage. I washed all of our hunting attire in Dead Down Wind laundry detergent and each morning I would use the 3D evolve field spray, covering both Michal, Steve and myself. Black bear have poor eyesight but their hearing and sense of smell are exceptional. In most cases there will be a light breeze blowing. Sometimes playing the wind is a challenge in itself. When starting a stalk and taking the wind into consideration we often alter our caricature path as the wind will shift. I have experienced the wind blowing into my face on the start of a stalk and before taking a shot the wind will be blowing from our back. Another reason using Dead Down Winds scent elimination products is so important.

The second day found us glassing a 50 plus acre clear-cut. It was not long before Steve spotted a very nice bear about 150 yards into the cut. We discussed our strategy by studying the layout. It was like a silent tableau as the beast of the forest was feeding. There were several stumps and ravines we could use. The wind was perfect as it was blowing slightly from our right to our left. To add to our advantage I again sprayed myself, Michal and Steve with Dead Down Wind field spray.

I cocked Michal’s crossbow and told him that I would carry it until we got close enough for a shot, then I would put a bolt in place.

The bear was above us on a little rise so we would need to get below the bruin to aid in hiding our movements. As we moved ahead, I knew we would have all the time it would take to make the stalk. Hunting with Steve over the years, I knew there would be little chance of another hunter driving the road where we where parked. Slowly we made our way into the clear-cut. Above us, the sky was a beautiful cerulean aura, which is often observed in the spring hunts. The morning sun glistened on the pines in the distance that surrounded our location.

Keeping an eye on the truculent beast, We moved forward as our group crept silently, edging past stumps, bushes and around tangles of fallen trees. We would need to alter our stalk as we came across a creek that was covered in brush. Not wanting to make excessive noise on the stalk we backtracked until spotting an old deer trail. The trail led into the clear-cut in a caricature way that would expose our movements. With Steve in the lead, we move ahead slowly continually watching the bear. The bear was feeding and working its way to the road where we had parked. Making our winding path, Steve stopped and pointed above us where the bear was still feeding on the edge of an escarpment. Still not detecting our presents, it continued feeding.

Steve gave me the OK sign, I slowly placed a bolt in place and handed the crossbow to Michal. Quietly I told him to wait until I ranged it with my Leupold rangefinder. 42 yards I whispered. The beast was feeding broadside as Michal raised his crossbow and took careful aim. I watch him as he began to slowly squeeze the trigger; I then turned my head to watch where the arrow would go.

As the bow released the arrow, I watch it arch and disappear just behind the shoulders for a double lung shot. The bear made a woof sound and started to run; unfortunately, it ran down hill straight to us. We all dropped to our knees and I told Michal not to move. As the bear ran about 25 yards, it toppled over just 15 yards from where we were crouched. Steve said “I don’t think it is going anywhere but let’s just wait a few minutes”. Steve did have his 270 rifle as a backup but it was not needed. After several minutes, we all started moving forward.

The hunt was over as Steve poked the beast, he looked a Michal and said congratulations Michal this is your fourth-black bear.

This was another exciting black bear hunt with Sentinel Mountain Safaris, the next hunt would be mine as we had one more tag to fill. Hunting black bears for many years, I know how sensitive their smell is. As in most hunting cases it is vital to cover your scent and trying several scent covers over the years I have found Dead Down Wind works the best.

For the best in scent elimination products always count on: Dead Down Wind

If you would like to hunt with Steve, check him out at sentinelmountainsafaris.com or call me at 360-273-9198. I will be taking over the bookings and the web site for Steve.

Big Bear's of the East