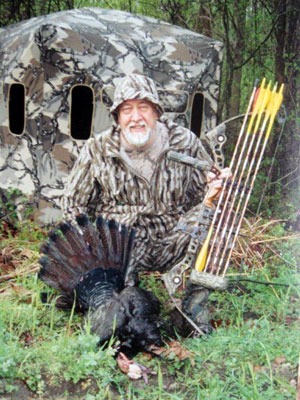 BLIND LUCK? I arrowed this Mississippi gobbler when he and another longbeard responded to seductive hen talk. Portable blinds offer bowhunters the opportunity to remain unseen while drawing an arrow at point-blank ranges. Well-placed decoys complement any blind set-up.

FEBRUARY AND MARCH ARE GREAT MONTHS for preparation and anticipation, especially if you’re a turkey hunter. Deer season is mostly a memory, predator and shed hunting are well underway and any time you’re able to spend in the winter woods offers the perfect opportunity to check local game populations and plan for upcoming hunts when new seasons finally roll around.

For me and millions of other American hunters, the booming springtime gobbles of a tom turkey are a clarion call every bit as thrilling as the throaty grunts of a rutting buck or the eerie bugles of a bull elk. Admittedly, I make no claims to be a world champion turkey caller or much of an authority on these big birds; however, I’ve had ample opportunities to bowhunt and tag longbeards from Mississippi to Montana and lots of states in between.

What I’ve learned is not new or revolutionary, merely effective. If you’re already a successful turkey hunter, I offer best wishes for continued success. If you’re just getting started or looking to improve your chances of arrowing a wary tom, I can share what works for me and suggest you consider trying my techniques. Here’s some bowhunting turkey gospel from the Book of James:

*Turkeys can see in almost a complete circle, distinguish colors, and pick up the slightest movements faster than you say “Oops!” As one veteran hunter once opined, “If gobblers ever develop a sense of smell to go with their eyesight, we’ll never tag ‘em!” About all turkeys lack in the optical department is decent night vision … and it’s against the law to hunt birds in the dark.

*Because turkeys have such great eyes, it’s often tough to draw and release an arrow when gobblers are within good bow range. Although I have friends who’ve arrowed birds while hunting ‘em from tree stands, I’ve had zero success getting shots from elevated stands. Deer and bears, yes. Turkeys, no. For my money, camouflaged pop-up blinds are the answer (assuming enclosed blinds are legal where you hunt). Portable blinds can get you close to the action, set up quickly and keep you invisible to eagle-eyed toms and hens. Shoot-through open windows or mesh offer close range opportunities and inside a blind it’s easy to draw your bow without being spotted. Regardless, camouflage your bow hand and face.

*I keep my calling simple and don’t overdo it whether using a box, diaphragm or slate call. Normally, I’ll use hen yelps and clucks from time to time whether I’ve heard birds or not. I also answer toms with gobbles of my own, but shut up when the longbeard heads my way. If I can see the tom, I may keep him interested with soft clucks or purrs.

*My favorite decoy set-up involves one jake and one or two hens. I’ll place the jake about 15 yards away with the decoy facing my shooting window; hens are staked out close by. Typically, mature gobblers confront the fake jake as they approach, strutting and displaying. Big toms will try to intimidate younger birds, eventually facing the decoy. This provides an ideal chance for a killing shot at near point-blank yardages.

Note: Leery gobblers and pressured birds may shy away from newly erected blinds. When hunting my own property or other private ground, I often put the blinds in place well in advance of the season along well-used travel corridors or near feeding and roosting areas.

*There’s a saying among experienced turkey bowhunters that advises, “Hit him high and watch him die. Hit him low and watch him go.” While that’s oversimplified advice, it offers solid food for thought. Hitting a turkey with an arrow is not that difficult; however, delivering a killing shot to the vitals is a bit tougher. After all, a turkey’s kill area is about the size of a softball and it’s often well-hidden within a ball of fluffed-up feathers. Miss by a mere inch or so and you may have trouble retrieving your longbeard, especially if the wounded bird manages to get airborne or is able to regain his footing and can still run. Believe it!

*I’ve found the three best aiming points are the base of the wing on broadside birds, the vent or base of the tail when the gobbler is fanned and facing directly away, or – as is common with shotgun hunters – the red, white, and blue head if the turkey is close and stationary. Head shots are lethal and can drop a bird in his tracks. Ditto for a facing-away shot where the broadhead severs the spine, Broadside shots are excellent, especially when the heart-lung area is penetrated. Regardless, it’s a good idea to get out of the blind and pin a flopping bird. That’ll prevent a long foot chase if your arrow hits slightly off target.

*Finally, most any hunting head that you use while deer hunting is good for gobblers, too. But don’t overlook the special turkey heads like NAP’s Spitfire Gobbler Getter,  the X-Change Lopper or Thumper, and the time-tested Gobbler Guillotine from Arrowdynamics. I’ve also had good luck with the Rage Slip-Cam and other large expandable broadheads.

Why not enjoy this spring in the turkey woods? Pick a spot and shoot straight!