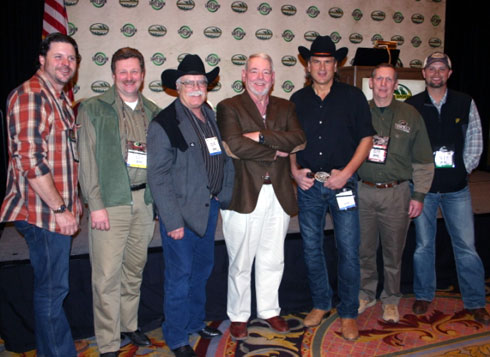 I’ve been watching the industry web sites and publications for mention of the upcoming “Outdoor Legends Tour” of Southwest Asia. The tour was announced at the SHOT Show a couple a weeks back but much to my chagrin I have only seen one or two mentions in print. Guess the hunting and shooting press crowd is more interested in “The 10 Best Products of SHOT” and “New Guns They Can’t Miss” than filling us in on some very big news.

A special press conference was held by Armed Forces Entertainment and The Outdoor Recreation Heritage Foundation of the Paralyzed Veterans of America to announce that a group of hunting industry celebs would be participating in the first ever “Outdoor Legends Tour.” A group of the industry’s most notable hunting celebrities will be heading to some very dangerous parts of the world to spend some up-close-and-personal time swapping hunting (and maybe a few fishing) stories with our troops. Tagging along behind Aaron Tippin or Craig Morgan or maybe the Marshall Tucker Band? Not a chance, our guys are touring under their own horsepower because the U.S. Department of Defense, recognizing the importance of hunting in the lives of our brave men and women in uniform, wants them there. If this is not an honor to every man and woman owning a hunting license in this great country of ours, what is?

The exact location of the group’s visit could not be identified for security reasons but the dates are Feb. 27-March 7. This is no ordinary tour with press agents and security details and such. According to Marine Lt. Col. Lew Deal who put the tour together, “They’ll be out there on the tip of the spear. There won’t be any lights or stages where they’re going.” Guess they figured our “guys” could handle the pressure. And I do mean “our” because these 8 outdoorsmen (and one woman) will be representing not only the United States of America but the entire outdoor community as well.

The group is comprised of some pretty familiar faces. Faces that our troops, at least those who hunt and fish, (and I’ll bet that’s most of them) have only dreamed of meeting. Imagine Mossy Oak’s “Cuz” Strickland “roosting” a gobbler for a tent full of soldiers or “owling” at 4 a.m. when everyone else is asleep. He’s the kind of guy who will sit up all night to do just that because God knows it’s been way to long since our turkey hunting troops have heard any turkey talk. Or Jim Shockey, telling about the moose that didn’t get away or how his Dad did this or did that back in the bush. Jim’s one rough, tough bush hardened Canadian who can really tell a story. Can you see Michael Waddell yucking it up with a truckload of brave young men and women till tears stream down their cheeks (tears of joy that is)? A laugh a minute is how this character rolls. Bass Pro’s Jerry Martin can talk killing deer or calling turkeys and he’ll have plenty of pictures to prove it. I know, I’ve seen them all (or it seems like it). He can also share what it was like being in the service during the Vietnam Era and wondering when, (or if) he will roost another gobbler. Brenda Valentine (the First Lady of Hunting and NWTF Spokesperson) will be there to lay some “ya’ll calls” on the troops and tell them as only a good ole gal from Tennessee can, that they are loved and appreciated and before long they will be back home in a treestand.

Did I mention Bill Miller the voice and face of the North American Hunting Club with their 800,000 members (think more than a few of those troops are members)? Boy, will these troops be surprised to learn what a regular down-to-earth all around nice guy Bill is. He knows how to make friends and by the end of the tour he will have made a few hundred (or thousand) more. Outdoor legend and iconic writer Jim Zumbo will be there too. Chances are most of the troops that come out for the tour will have grown up reading his stuff. The real kick will come when the soldiers call home and tell their folks about Zumbo, as they probably grew up on his stories as well. Former major leaguer and hunting TV personality Ryan Klesko will be talking baseball and hunting; a double treat for our brave heroes. Who knows, maybe they can even get a pickup game going? And George Thorton, who heads up the NWTF, will be along to keep the celebs in line and everything running smoothly. George is known not only as a great businessman, but as one of the nicest guys in the outdoor industry. And if there is one thing these soldiers need, it’s a little nice; and maybe a complimentary NWTF membership huh George?

That’s our all-star cast, the hunting industry celebs, who will be “out there” on the point of the spear, bringing a little bit of “back home” to those fighting and yes, dying for our freedom; freedom that includes the right to pursue happiness (hunting, fishing and the like) not to mention our 2nd Amendment rights.

The touring industry celebs are quick to point out that it is not about them– it’s about the troops. To a man (and woman) they stated that when the call came they were not only honored but humbled as well. “Imagine, me being asked to visit our troops. This is the honor of a lifetime! Something to tell my grandkids” stated Bill Miller as the others nodded in agreement. Col. Deal was quick to add, “When these folks got the call there was absolutely no hesitation, no, ‘Let me check my schedule.’ All I heard was ‘When do you need me’ and ‘Where do I show up.'”

Jim Shockey put it this way, “I may be a Canadian, but I couldn’t say “yes” quick enough. These brave young men and women are there for us, day-in-day-out, this is nothing compared to what they are doing”. As Jerry Martin added emotionally, “It was pretty rough for me when I was in, these kids deserve everything we can do for them; I’m proud to be going”

As an industry guy and lifetime hunter, I left the room standing two inches taller and walking a whole lot straighter. And every hunter, shooter and outdoors person reading this account should feel the same way. No, it’s not about the hunting celebs and yes it’s about the troops but it is also about the sport that we hold so close to our red white and blue hearts. We, as hunters, have been chosen by the Department of Defense to honor those who honor us with life and limb. When Col. Deal called Cuz Strickland over a year ago to ask if he thought the hunting community would step up to the plate There was no hesitation in Cuz’s voice when he said, “They’re hunter’s aren’t they? They’ll be there; just be sure to include me”.

The good people who put this tour together know how important hunting is to the lives of our bravest men and women. They didn’t call PETA or The Humane Society, they called one of our own, fellow hunter and outdoorsman, Cuz Strickland. This is a really big deal and we should all be proud, and we need to tell our friends and families about what our fellow hunters are doing for our troops. We owe that much to the folks going over there.

I’ve shared a campfire with more than half of the guys (and Brenda) going over and know first hand that they can really tell a story. Oh boy, can they. But sharing a campfire with someone reveals more than just how well they can spin a yarn. You can tell a lot about a man or woman when you share a campfire with them. Campfires have taught me a lot about the character of this group. I know them to be good people of good character who will make a difference in the lives of our troops. I mean it! Not for just one day (like a rock concert or even a Bob Hope show) but for an entire lifetime. Make a friend with one of these guys and you’ll make a friend for life.

I can see it all now. They’ll start by telling a few of their own stories or showing some big deer pictures or maybe even showing some TV footage, but before long, they’ll be chewing and spitting and those young people will feel like they are sharing a campfire with a couple of old friends. The kid from Buffalo County will be remembering big bucks and the gal from Stuttgart will remember how her Grandpa never seemed to get the hang of counting out his limit of greenheads. And the talk will shift to familiar times and familiar places. And that night, when these brave young men and women lay down to rest, they’ll think good thoughts and maybe smile a bit before they drift off — and they’ll be home.

Releasing for Increased Accuracy with Back Tension

Big Bear's of the East