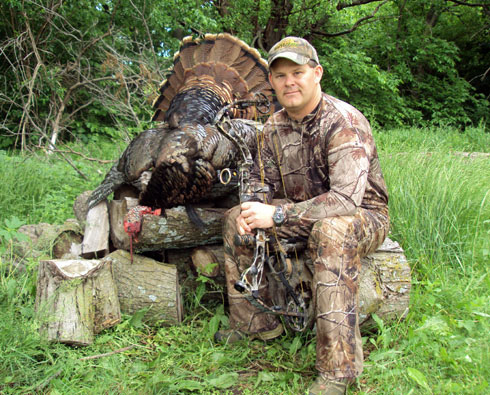 Author with his HECS turkey.

I’ve been bow hunting wild turkeys in Kansas for around 15 years now but my first year wearing a new concept in clothing, HECS. HECS makes a unique line of clothing that features a special weave of carbon fibers that blocks the EMF that all animals give off. Science has shown that other creatures are able to detect the EMF that, say humans, give off which is why game animals just seem to get more alert and cautious the closer they get to us while hunting. I was really eager to try my HECS suit on a Kansas Gobbler with a bow.

After I ordered my new Martin bow and a dozen Victory V-Force V-1 arrows, it didn’t take me but a few shots to confirm this was one of the best combination’s I have ever shot. It’s a great feeling knowing you are perfectly placing an arrow in a turkey target out past 50 yards, while kneeling on the ground. I would never even consider shooting a turkey at that range but that long range accuracy sure gives a guy a lot of confidence at 25 yards and in.

My goal for the year was to shoot a tom with my bow without using a ground blind and I felt like the HECS Suit might be the answer. It was early May in Kansas and so far time had not been on my side. I had harvested a big 3 year old tom with my gun on opening day but since then I had been busy with work obligations and taking my kids and buddies out hunting so my time had been limited. Now, my buddies were done, my son had harvested both of his birds, my 13 year daughter had harvested her first bird and life was just about as grand as it could get…. or so I thought.

The day before the hunt actually took place I was hunting with a buddy on a new property that the farmer had recently purchased. While walking around I came across a beautifully tight funnel that would force big whitetails to come through to get to another doe bedding area. I was anxious to get a tree stand up now so not be disturbing the deer later in the year. The next morning after sun rise, I was heading in, tree stand on my back, tree steps, trail camera, ‘the works’. I wasn’t hunting but decide to put on my HECS suit, camo and take my bow just in case I ran into an old tom.

As I got near the stand area I realized there was a tom gobbling hard somewhere to my right. I quickly yanked the stand off my back, slipped up the creek about one hundred yards and got set up next to a big white oak tree. I called at the bird and he immediately answered. I waited a few minutes and called again; he’s closer. Now I could see he was coming fast. At about 20 yards he slowed down and went into full strut. I came to full draw and waited as he closed the gap to 10 yards. I could feel the heart pounding in my chest as I watched the bird, at full strut. At seven yards I squeeze the release trigger.

The Victory arrow hit perfectly and the big bird immediately fell over, wings beating the ground and air until he finally laid still. It was over, what a rush. I had just put the HECS on a mature 3 year old tom at seven steps with a bow and no ground blind or cover. Not only were the Victory arrows and the Martin bow a great combination, the HECS suit worked just as advertised. The wise old tom had no idea I was there until it was too late.

Afterward I quietly said a prayer and thanked GOD for allowing me this incredible opportunity. I grabbed my trophy, walked back to my stand area and placed my stand for the up coming whitetail season. It just doesn’t get any better than that on a spring day, and in case you were wondering, the new funnel area did pay off with a beautiful P&Y whitetail. But that story is for another article at another time.

Want to put the HECS on a bird this year?  Go to : HECS