Editor: Last week we published a harrowing account of an outdoor women in ID: https://bowhunting.net/2012/01/idaho-wolf-attack/

I just received a photo of this particular attack: 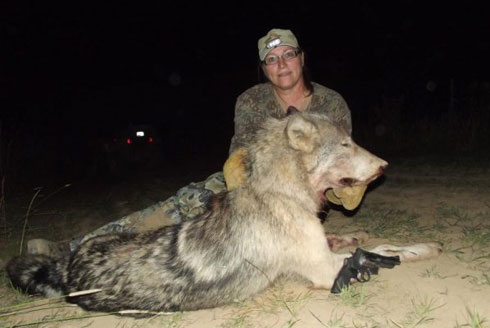 This is an email I received from Crystal Diamond of the Beaverhead Ranch: (Location – Gila National Forest between Magdalena and Silver City, NM.)

I returned home to Beaverhead after being gone for several days with my 2 young daughters, Cayden (age 3) and Reece (age 2). My husband was away from home and scheduled to return Thursday. On the drive back I had passed my father-in-law who informed me that a wolf had been sighted at our Beaverhead Headquarters earlier that morning in the horse corrals & harassing our peacocks. The wolf had been chased away.

Arriving at Beaverhead, I drove to the main headquarters to speak with U.S. Fish & Wildlife Service (USFWS) representatives already there. They stated that they were aware of the wolf sighting and would return in the morning. I drove directly to my home, reversing my truck up to the front porch. I unloaded both of my children from their car seats and placed them on the front porch which runs the entire length of my house. I began unloading groceries and luggage from the bed of my truck- walking in and out of the house with the front door wide open. The dogs played rambunctiously around my vehicle and around the yard. I gave little attention to the commotion of the dogs and continued to unload my truck.

My daughters were still outside when I walked back out to see my neighbor speeding up my driveway hollering out his window. He yelled for me to take the girls inside while pointing to the dogs who were roughhousing with a collared wolf no farther than 35 feet from my 2 year old daughter. I grabbed my girls and ran inside slamming the door behind us. My neighbor asked for a rifle to haze the wolf and took off running in its direction. Within minutes I heard a gunshot.

I waited about 15 minutes before locking the children in the house and walking up over the hillside to locate my neighbor. I was yelling for him as loud as I could. Topping out over the hill approximately 100 yards from the house – I saw the wolf stopped and staring about 50 yards in front of me. Screaming, I ran as fast as I could back to the house. Apparently, as my neighbor ran up over the hill after the wolf she had circled back around, beating him back to the house. It was soon completely dark and we were unable to see any further than the glow of my porch lights. My neighbor instructed me to remain inside the house with my children and dogs and not open the door at anytime during the night.

My overhead porch light, two motion lights and a brightly lit holiday porch decoration were left on. Most of the inside lights were on, including our Christmas tree in the front window. Music played as the girls ran around the house up until bath time at 6:30 p.m. I had just placed them in the tub and walked directly to the recliner in the living room just feet from the front window. I was on the telephone when I looked over my shoulder to see the wolf staring back at me . . . her nose pressed against the window pane.

I jumped up and stepped away from the window. She remained at the window watching me for just the few seconds before I ran out of the living room into the bathroom where my children were. I called my husband who at this time was on his way home.

Throughout the evening my male border collie whimpered at the front door aggressively trying to get out. Both dogs paced the house on high alert all night. At my husband’s request, my neighbor returned to my house. He sat on my front porch with nothing but a blanket, camera, & gun in freezing temperatures until midnight when my husband returned home. At that time, they noted all the tracks on and around the front porch and attempted to preserve several tracks by placing bowls and cans over the prints. Preserving all the tracks would be impossible, as fresh snowfall began to cover the ground.

Our neighbor returned to our house around 7:30am. Together with my husband, they went to take photographs of the wolf tracks they’d tried to preserve the night before. New wolf tracks in fresh snow were everywhere – all around the children’s play yard in the back of the house, leading up to and on the front porch, in the front yard and in the driveway. Based of the location of tracks, they determined the wolf spent most of the night within 50 yards of the house.

USFWS, Catron County wolf investigator, and Catron County Commissioner all arrived around 8:00am. Using tracking devises, the wolf was determined to be with a quarter mile of the house. I was assured that the wolf would be removed.

Pressure from heavier-than-normal vehicle traffic and people on the ground, had pushed her as far as two miles from our house throughout the day.

Later that evening, the wolf was returning to our home and was put down by Wildlife Services. She was euthanized 150 yards from my house on private property. I was notified by Wildlife Service Officers that the wolf had been removed and would no longer pose a threat to me or my children. Words cannot express the overwhelming sense relief when I received the news.

My daughters and I had literally been held prisoner in our own home for over 24 hours. It’s difficult to describe the terror of a predator so fearless and eager to get in my home. My responsibility as a mother is to keep my children safe at all times. For a period of time, that God- Given Right was stripped away. The thought of “what might have been” consumes my every thought.

Thank you to USFWS for resolving this issue in a quick and effective manner. Thanks for the swift action of Wildlife Services and the professionalism of their officers. And most of all, thank you to a neighbor who placed the safety of my children above his own. Without his watchful eye, the events of my story may have very easily had an unforgivably tragic ending.

I was traveling east on Hwy 59 with my 2 young daughters in the car when my oldest, who frequently gets carsick, demanded a quick roadside stop. I pulled over just east of Poverty Creek and removed her from the vehicle. We walked around for several minutes so Cayden could get some fresh air after being sick on the shoulder of the road. The drivers door and back door were wide open. My 2 year old daughter, Reece, remained in the car crying hysterically to be removed from her car seat. 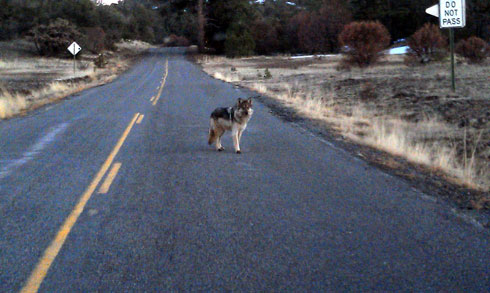 After about a 5-6 minute stop, I loaded Cayden back in the car. I then walked around the back of the vehicle toward my door when I saw a wolf standing in the middle of the road within 20 feet of my open car door. I ran to jump in my car & shut the door. The wolf, who had been standing still then walked up to the drivers side of my vehicle and stood a moment. 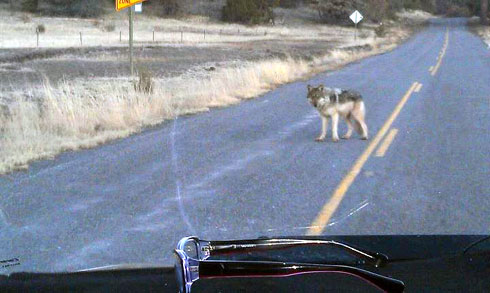 Reece was still crying loudly. Using the camera feature on my phone I was able to capture several photos of the fearless behavior of this uncollared wolf. He’d pace in front of my vehicle from one side to the other, again and again. After watching each other for about 6-7 long minutes, the wolf seemed to tire of us and began to trot off to the south. As soon as I’d put the car in gear & move forward a few feet- it would quickly stop & curiously trot back to the car (the 2nd time he walked off, noticed movement, then returns to the road was captured on video recording). The standoff had now lasted roughly 12-15 minutes. Needing to get on my way, I slowly drove off. Leaving him sitting on the roadside shoulder, exactly where my 3 year old daughter had been sick just minutes before. This is the 2nd time in just over one month that a wolf has come within feet of my children. 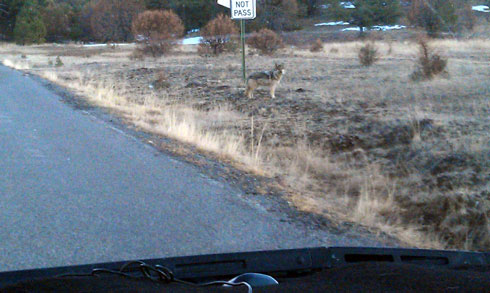