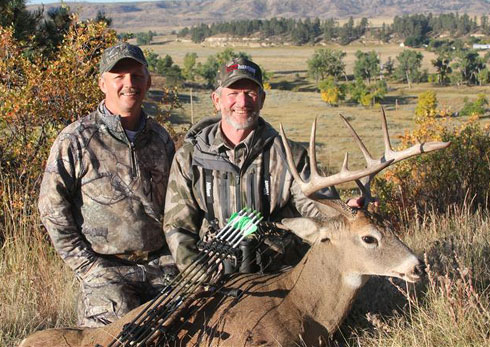 Bowhunting success is something to be treasured among friends, no small part of which is showing respect to the animals we hunt and the sport of bowhunting itself.

Respect: A high or special regard; to consider worthy of high regard. — Webster’s New Ninth Collegiate Dictionary.

As this is written in mid-February, I am just off the trade show circuit. That means I am spending a lot of time in my office taking care of editing and writing tasks and also preparing new equipment. In so doing I often have the TV on.

Lately I have been watching a lot of the hunting shows on cable. Admittedly, I rarely watch them. Seems to me there’s little to be learned from them and in fact, it seems to me they often portray bowhunting as it really is not. Most shows follow a predictable pattern, the end result being that a magnificent game animal or two or three is killed.

Next comes what is, to me, the disturbing part — the celebration. You know, when a guy or gal turns to the cameraman and gives him a high five, fist pumps three times and his eyes bug out and the veins pop out of his neck as he begs the audience to give him a little time to compose himself before he says anything. Doesn’t matter if the animal is big or small, how difficult it was to get into position for the shot, whether the animal was taken on a tough public land hunt, shot over a feeder or killed inside a high fence, the celebration stuff is pretty predictable.

I don’t know about you but in more than four decades of seriously hunting upland birds, waterfowl, small game and big game around the world, I cannot remember ever dancing in an animal’s face after killing it. For one thing, my dad and granddad would have slapped me silly had I pulled something like that in their presence. But then, they were big on respect. They both worked very hard for the little they had in life and were grateful for it. They taught me to respect people, our country and the great gift of the outdoors and the freedom to both explore and learn from it we Americans are blessed with. Later, when I found some success in sports and as young men are wont to do early in life, got a little big for my britches, I remember dad quoting legendary Alabama football coach Paul “Bear” Bryant” — “When you get to the end zone, act like you’ve been there before.” What Coach Bryant and my dad were saying was simply have some class; that in victory, one should show respect to both the game and your opponent.

I’ve been involved in the filming of hunting shows enough to know that they are, in essence and by necessity, for the most part Hollywood, not real hunting. That’s not all bad except that I wonder what people who are not as committed to hunting in general and bowhunting in particular, think of it when they watch most of the hundreds of outdoor shows on the air today. The same can be said of the novice bowhunter. There’s little entertainment value in showing what 95 percent of bowhunting is — a solitary endeavor that requires patience, persistence and a life-long commitment. The mature bowhunter has made a lifetime of mistakes and learned from them; it’s a process that never ends. He revels in solitude, the waking of a new day in the woods as the sun begins to rise, not some head-banging music blared over the TV to try and make the approach of an animal more exciting to a couch-bound audience. He spends a lot of time getting his equipment just so, then countless hours practicing his shooting so that if — not when but if — a shot at the animal he wants presents itself, he has done all he can do to place his arrow precisely. But that doesn’t make for entertaining TV.

One of the first fine books I ever read that concerned itself with the outdoors and hunting was “A Sand County Almanac,” by Aldo Leopold. Leopold, a professor at the University of Wisconsin, Madison, was an ecologist, forester, and early environmentalist as well as dedicated outdoorsman and hunter. “Almanac” was published in 1949, shortly after his death. One of the tenets about the nimrods found in its pages was that, even back then, Leopold saw that many of the outdoorsmen of the day were becoming what he called “gadgeteers,” relying upon technology at the expense of developing knowledge of the outdoors in general, the game they pursued in particular and woodsmanship skills. He saw the coming of a generation in which instant gratification and overnight success would replace hard work, commitment and learning. The latter are ideals that are the foundation of our outdoors traditions — but they sure don’t make for exciting television.

Recently I watched one of the more popular bowhunting shows in which the host was off chasing turkeys out West. It was early in the season and the weather was cold and wet, not the best conditions for calling in a gobbler but he set a pop-up blind and decoy and managed to entice a bird into range. At 20 steps the first shot took feathers off the turkey’s back and as the bird was running off he lobbed two more arrows in frustration which of course didn’t come close. The audience then had to listen to the reasons why the first shot was missed — we’ve all been there — then some sad dialog about the follow-up shots. Later in the show, when he did kill a bird, there were high five’s and backslapping and giggling. If the team felt any humility or regret at launching desperation arrows at a running gobbler that clearly wasn’t in any danger of dying from the first shot, I didn’t detect any.

Producers are not worried about impressing an Old Guy like me. Most of them come from a younger generation, and that’s the crowd they are primarily catering to. I get it. But I fear they are missing the big picture. Hunters are a minority in our society; as a percentage of our growing population, our numbers are actually shrinking. Polls show that most Americans — who know virtually nothing about Mother Nature in general, the game we hunt in particular and how difficult it is to get a quality bow shot at an animal — support or at least tolerate, regulated hunting and that support is critical to our survival. What would they think if they saw bandy roosters on hunting TV doing an end zone dance after killing a magnificent deer, or elk, or bear? What do such shenanigans teach young people just learning to hunt? If all you knew about bowhunting was what you saw on TV you’d think it was a fast-paced action movie with a high probability of success when in truth, just the opposite is true.

This year, if things come together and I or one of my hunting buddies is lucky enough to kill an animal, for certain there will be congratulations, perhaps even a handshake, as we share in our good fortune. Later that night we’ll most definitely toast the gods. But you can rest assured that when we recover the animal there will be a moment of silence and prayer, not a chest bump. For us, bowhunting is not a reality show. It’s all about respect.