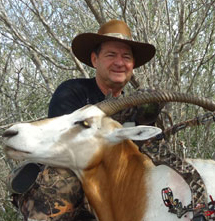 I know most of you people remember a western movie by the name of “Rough night in Jericho” This is my story about rough days in Three Rivers, Texas.

This is an Antelope that is native to the whole of North Africa. The Scimitar horned Oryx has been classified as extinct in the wild by the IUCN. The Scimitar Oryx natively inhabit steppe and desert where they eat leaves, grass and fruit. They form herds of mixed sex containing up to seventy animals. Formerly they would gather in groups of several thousand for migration. Scimitar Oryx can survive without water for many weeks because their kidneys prevent loss of water from urination and they can modify their body temperature to avoid perspiration. As you can see they are a very hardy animal living in the Sahara which is a very harsh environment. The Scimitar Oryx were hunted for their horns, almost to extinction.

Scimitar Oryx are tough animals to hunt even though here in Texas we have large herds on numerous ranches because they have adapted so completely. The hot dry South Texas climes are excellent country for raising these beautiful animals and they have populated greatly. Even though they have white bodies, you would think they would stand out like a proverbial sore thumb in the harsh brush country but they are very sneaky and lord can they see! I’m here to tell you they can see a flea crawling across a caliche road at 200 yards.

My first morning to hunt on the Frijolia Ranch (Spanish for ‘Mountain Laurel’) was hot, I mean 90 degree hot. Before daylight we were already sweating as we crawled into our Mathews Edition Carbon Express blind. With me was RW, my cameraman and our guide Bubba Echkhardt. We sat there sweating as daylight was slowly but patiently crawling to life out of the East. The beautiful grays, purples, blues and golden hues of dawn showed through the dust bowls lighting up the sky. How beautiful this morning was breaking.

I drew my Z-7 Mag back to make sure everything was working fine and I could see to shoot from all of my shooting lanes and that is when lightning struck the outhouse. As I drew my bow back, it came unglued! To this day I can not tell you what happened. But that sure broke the silence of the morning. I held my bow and saw that the cables had come off of the wheels. Definitely a Kodak moment written all over my face. Everyone was asking at once “What the h…. happened”? I looked at RW, “This hunt is officially postponed RW, we’re headed for San Antonio to visit Wheelers Farm & Ranch, an authorized Mathews Dealer and get my bow back up”. What a way to start a hunt.

Two hundred miles, five hours and one repaired bow later we were back at the Frijolia Ranch and ready to go! Now it was really hot, I mean that white hot glaring heat that can boil you down to a sweat soaked dish rag with no interest in hunting. This was when one’s only real desire was to sit in an air conditioned lodge and drink ice cold tea. But we postponed the tea and headed out to a waterhole where we had another Mathews Edition Carbon Express blind set up under a huge shade tree. Here we would sit and wait for Oryx to come in to water and graze on the succulent grasses around the tank. Nice idea, only no Oryx showed up. Our first day of hunting was a rough day in Three Rivers from start to finish.

The second day was not much better. It was still brutally hot and nothing moved. After sitting in the ground blind for 4 hours we pulled out and went to a local BBQ place called Pure Country and had some of the best BBQ you could ever put a tooth to. Then, with bellies full, we went back to the blind. Our guide had stated, “No need to be in the blind before 5:30 pm” WRONG! When we arrived at 5:30 pm the whole herd was already on the tank, we were too late. Disappointed but not beaten we decided to drive right up to the tank where RW & I would get out and into the blind and try that. Well the best laid plans of mice and men do go awry as that didn’t work well at all. We finished up the week end with no arrows shot!

The next time I was able to return to the Frijolio Ranch was between Christmas and New Year and the weather had changed dramatically with lows in the 30’s and highs in the 60’s. The first day on the ranch we were hunting with Tony Petri the main guide on Frijolio Ranch. Tony is one of the best guides and trackers I have ever hunted with which was great because the Scimitar Oryx were being difficult again They were not only hard to find, when we did find them they were almost impossible to stalk! Tony and I tried on numerous occasions to stalk these Oryx only to be picked off by one of the herd. Several different stalks we would be right on top of the Oryx and only saw them when they busted us and took off for somewhere other than where we were. Talk about natural camo!

Finally Tony came up with a plan where we went to an area with a huge food plot. We took advantage of that and also put out some protein pellets and Heartland Wildlife Institute’s. Autumn Addiction. That really fired the Oryx up and man did they come looking for the good stuff. I had one lone bull come in but slowly and extremely cautiously. It must have taken that bull a half of an hour to get to the area where we had poured out the protein pellets and Autumn Addiction. I was concealed in a Mathews Edition Carbon Express blind and had two different whitetail bucks come to the motte (a small grove, clump or hillock of trees on a prairie) I was sitting in and browse on guayacan (pronounced “y-a-cann), an important browse plant for deer in Texas that has 16 to 18 percent crude protein! The bucks never spooked and as the Bull Oryx was feeding contently I quietly drew my Z-7 Mag. Steadying on the kill zone I released the Victory V-Force 350. The arrow entered the bull as he was quartering away, went completely through and landed 10 yards on the other side. The bull took off low running and at about 50 yards he turned where I could see a basketball size blood spot on his side. I knew the Mathews Edition Grim Reaper Hades 3-blade had done its job and the bull was in big trouble.

Tony and I waited the obligatory thirty minutes and then took up the blood trial. For the first 1 ½ miles the bull was running and throwing blood on both sides of his body. Ray Charles could have followed that blood trial. Then he stopped running and slowed to a walk. We followed for another ½ mile where Tony’s expert tracking skills came in to play leading us to the piled up bull. He had traveled 2 miles from where I had shot him with a lethal hit that would have put any other animal down in yards not miles. What a trophy he was though! The bull had 43 inch horns and 7 inch bases. This was one of the toughest animals I have ever hunted and they take more punishment than any animal I have ever seen.

When we took the bull to the skinning rack and saw that my arrow had entered between the 6th & 7th rib, taken out the diaphragm, liver and both lungs and cut a huge gash out of the heart never entering the chamber of the heart and then exited the left side between the 5th & 6th ribs. Even with this kind of damage the bull ran almost 2 miles. That was one tough hombre. By the way this was some of the best meat I have ever eaten, high in flavor and very tender.

If you ever decide to hunt Scimitar Horned Oryx and I highly recommend you do, make sure you take only a quartering away shot, shoot as much poundage that you can handle and keep your shots under 25 yards. These are tough animals, very beautiful and very expensive. So do yourself a favor and make sure your ready for the hunt.

Short note about Tony Petri, he’s part ½ Apache. ¼ Mexican and ¼ Italian and was trained by Apaches in the art and science of tracking and knows his prey. This gentleman will actually go out and track animals that are alive to practice and hone his skill. He as a guide and tracker and he’s one of the best.

I want to thank Jason and Norma Mims, owners at Frijolia Ranch for being a gracious host and for their friendship.

EQUIPMENT USED ON THIS HUNT: