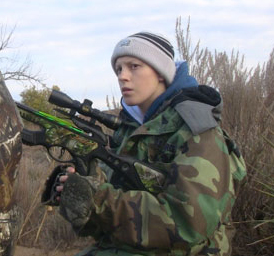 Taylor Hargrove, a red-blooded, all American teenager and sportswoman had been in the trenches fighting the battle of her life for longer than anyone should ever have to endure; however, her grace under the pressures of that battle was never more evident than on the weekend of Nov. 10 – 12, 2010.

While actively combating a rare and aggressive form of cancer, as the consummate sportswoman she was, she chose not to focus on the battle itself but on the upcoming deer season!

You see, Taylor, like all of you reading this article, had a heart for the outdoors. Her passion for our outdoor heritage was something that truly shone like a beacon in the night amidst struggles most of us cannot comprehend  and she did it with a smile on her face that makes the people around her contemplate what’s most important. She’s had life figured out. It’s about the sunrises and sunsets, family and friends, the stillness of the woods, the graceful dance of wheat in the wind, a buck’s furled lip and a doe’s tender look. Yes, she knew more than most of us.

That’s why, amidst her fight, she chose to hit the deer woods with A Hunt Above, a Christian ministry dedicated to providing dream hunting and fishing trips to our children fighting dangerous illnesses.

Shawn Green, Owner of Eagle Chief Outfitters in Alva, Oklahoma donated a crossbow deer hunt to Taylor and A Hunt Above and met Taylor and her family with open arms the evening they arrived. Randy Arfele, a director for Hunt Above had arrived early in the afternoon to join Shawn as Taylor’s ‘Welcoming Committee’.

The weather was cloudy, rainy, cold and dreary but in no way set the pace of the hunt or attitude of the young warrior. Taylor’s words were instantly seared into Shawn’s memory as they headed out the door on the first hunt, “We can’t shoot one sittin’ on the couch!”

Taylor’s hunt was in full swing on the first morning as she sat smiling, seemingly without a care in the world, in the dreariness of the day. The deluge of rain, high winds and freezing temperatures only served to fuel her excitement and passion for the hunt. Alone, Shawn would have headed for higher ground but as he watched her, his own fire for the hunt was lit, as Shawn recalls, “I had the most headstrong passionate hunter I’d ever spent time with keeping me fired up about that hunt!” Unfortunately the first morning produced little more than cold, wet hunters…with great memories and some good laughs (not while they were hunting).

The afternoon hunt sent Taylor and her fans to another property for an evening of action. As they approached the property, Taylor’s father caught a great buck in the trees with a group of does. They pulled into the gate and in a flurry were out of the truck, Taylor’s crossbow at the ready; the stalk was in full swing. The buck was a solid 300 yards away but Shawn’s abilities as a guide really shined as he led Taylor ever closer to the bruiser buck. They stalked along a creek bank and down through a bowl where they could quicken the pace. At a distance of 70 yards, Shawn and Taylor had a great view of the buck but still needed to close the distance. They continued the stalk for a short distance, rising out of the bowl and into a tall patch of grass. Shawn glassed the buck, an 8-pointer easily scoring in the 130-inch class; a heck of a deer for a young warrior and her crossbow! 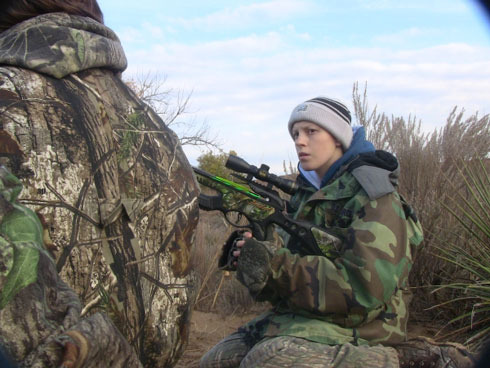 Shawn and Taylor settled into a good spot and Shawn began rattling. As soon as the antlers touched, the buck turned toward them and began coming in “on a string,” steadily picking up his gait. He stopped at the tree line and stared in their direction for a moment. He checked his does as they began wandering away. Shawn grunted but Taylor’s buck opted to stay with the does, never offering a shot opportunity.

Back at the lodge, hunting stories and laughter were a steady diet. Shawn felt a bond with Taylor and her family that has touched him to the core. Shawn described his new friend as a “young woman who simply brings out the best in people. She never got down about anything!”

The last morning found the Taylor clan at the lease waiting for sunrise. Not long after, at about 8:15 a.m., a great buck walked out at 300 yards. Shawn hit the horns again and the deer came in on a dead run but at 70 yards out he simply stopped and became a bit unsettled in his decision. Shawn softly rattled and grunted for a moment and he settled down. It appeared he would come but ol’ dad gave that big buck a little spook and he headed the other way. Shawn reacted quickly with some rapid grunting; the buck calmed and approached to within 50 yards. Unfortunately Shawn’s skillful grunting had lulled another buck up from behind, “When those two boys saw each other they took off!”

Continued hunting proved to be futile, at least in filling a tag; however spiritual tags were filled during that cold weekend in November. Shawn tagged out on spiritual fulfillment, encouragement, and passion for both life, and the hunt on a level he had never experienced. In the end, Taylor taught him a valuable lesson; life and hunting is pretty much the same thing. We are constantly pursuing, constantly challenging, and every time we stop to soak in the hunt, we realize we are immersed in splendor. Taylor lets that shine through in every aspect of her life. In the span of two days, Taylor’s deer tag was not filled but the hunt was a success. “She never got down about anything at all. She’s just incredible.”

I’d say it was A Hunt Above for every member of that little hunting camp. After all, her fighting spirit, wild passion and grasp on what’s truly important in life were not unlike those bucks that eluded her on two dreamy days in November.

Taylor earned her Angel Wings on March 20, 2011 but for those who were fortunate enough to witness her champion’s spirit were transformed forever. In a mere two days, Taylor changed lives.

Shawn can be reached for comments or hunt bookings at Eagle Chief Outfitters in Alva, Oklahoma by calling 580-430-5833.

Mike Macko, founder of this incredibly important ministry A Hunt Above, can be reached to submit applications, make donations or to volunteer by calling 601-594-4288 or e-mailing mike@ahuntabove.org. .

Kevin can be reached for questions or comments by e-mailing kevinr@just-hunt.com.

Hunt hard, hunt often and support the organizations that just love on our kids!

*All photos courtesy of A Hunt Above