by Brady Miller
in Bowhunting Posts
0 0
A A
0 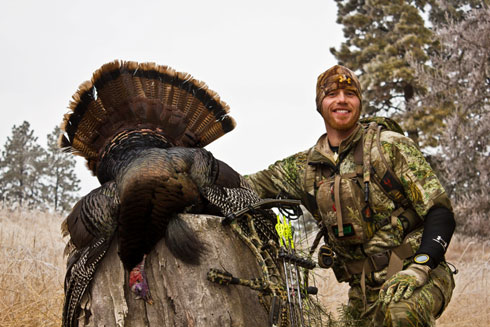 All smiles after a successful stalk.

For this past spring of 2011, I had set a goal of trying to harvest a turkey with my bow, a goal I thought would be both challenging and rewarding. To me, spring turkey hunting falls right in line with September elk hunting. I love to bowhunt elk in the rut, and bowhunting turkeys gives me that same rush of adrenaline that we all crave when you get a big old boss gobbler strutting and gobbling. The sounds of mews and bugles in the backcountry during September have been replaced with chirps and gobbles in the rolling meadows during April.

It’s been a long, tough ride, as the spring was filled with bowhunting turkeys in between bowhunting for spring black bear. This was my first time hunting turkeys and so off I went on this adventure after many months of research and practicing my diaphragm calls. It wasn’t difficult locating turkeys…rather the hard part was gaining access to the private land to hunt them. Where I was hunting, public land was limited and finding turkeys on the small tracks of public land was even more difficult. Unfortunately most of the turkeys I located were on private land. I contacted landowners before the season, knocked on many doors and offered to do what I could to help them out in exchange for a chance to hunt turkeys. Well, most of the time I was either denied or someone else already had rights to hunt the land. The attempts that drove me crazy were the landowners who loved “his” turkeys and denied me permission while the neighbor next to him told me I better shoot the first turkey that crosses his land as he dislikes them.

As luck would have it, the turkeys enjoyed their “turkey sanctuary” so much that a bird rarely came on the property I had permission to hunt. I did have the occasional jake and hen that I was able to coax over to my decoy and calling setup but I had set my sights on a tom so I passed up quite a few opportunities at taking a jake.

I went the rest of the spring without drawing my bow back on a turkey. Summer went by and I switched gears toward bowhunting antelope, elk and mule deer. It wasn’t until after the fall big game bowhunting season ended that I picked back up where I left off in the spring, and started chasing turkeys again.

It was now early December and this time around I left the calls in my pack and focused on finding food sources. I spent a lot of time scouting turkeys with my spotting scope and watched their every move in hopes to find a pinch point to put a stalk on one. More time was spent asking landowners permission to hunt, and it was the same cycle I found the previous past spring.

Hunting was tough and cold the first weekend of December and I went without getting a shot. It was now Saturday December 10th and the morning and mid afternoon were spent hunting four different pieces of property without locating fresh turkey sign. Yet turkeys were spotted on surrounding areas I didn’t have permission for. This was yet again becoming a difficult hunt. I spent the evening watching a flock of over 30 turkeys work a food source and proceed to head to their roost at dark. I had high hopes for hunting this flock the following morning.

I had permission to hunt the property bordering the food source so I setup near it at first light but as luck would have it the turkeys flew right out to the middle of the field without stepping foot on the ground where I was hunting. I watched, and waited….two hours had gone by and the turkeys looked comfortable spending the rest of the day in the field. I left that spot with my head hanging low and drove a few miles away. To my amazement I spotted a flock of toms and jakes working a field and heading to the west. I sat and glassed them for 30 minutes until they settled down into another field for the day, I found the landowner and asked permission. Luckily he said yes so off I went to devise a plan and try to put a stalk together.

The only option I had at first was to use a depression in the field to my advantage and belly crawl my way into bow range. Getting within range of over 25 turkeys with a bow in a field is tough work! Their eyes picked me out once I got within 80 yards and they started running up a hill to the northwest. I have just ordered a HECS STEALTHSCREEN suit to avoid this in the future and can’t wait until it comes to try it out. From what I have heard and read HECS would have helped avoid the turkey stampede I had on this hunt.

I was now in the heat of the moment and decided to sprint to a piece of timber that would afford me cover to make a stalk as the turkeys calmed down. After running as fast as I could, I got into the timber and starting working my way up a hill in hopes of cutting off the flock.

As I got to the top of the hill I took an arrow out of my quiver and waited at an edge of a meadow. Not even 15 seconds had passed before I heard the flock talking back and forth. Soon enough I saw turkeys working their way into the timber. I had beaten the birds to the top of the hill! I couldn’t believe it; things were starting to work in my favor. One by one the turkeys walked by in front of me.  I grabbed a range from my rangefinder, set my slider sight to 46 yards and came to full draw. I waited until I saw the largest bird before settling my pin and sending an arrow on its way. The shot was perfect as the bird ran 20 yards before piling up. Right as this happened another tom ran over and started spurring my tom. Even in the late winter I guess tension still runs high in a turkey’s brain. I gave the biggest bow in-hand fist pound that I could and ran up to collect my trophy.

A lot of weekends were spent chasing these birds. I have to give them a lot of credit as its not easy trying to call in or put a stalk on a turkey. But what a blast! My turkey ended up with ¾” spurs and an amazing 9.5” paintbrush style beard. I couldn’t be happier during my long and rough season chasing these birds.

This was one of the most difficult seasons I have had in a long time due to unforeseen events that basically ended my September bowhunting plans. I learned a lot about myself while bowhunting this past year. Even through these struggles I was fortunate to take two antelope, a mule deer and a turkey with my bow. In the end, my determination and perseverance helped me hone my techniques and put a nice finish to my 2011 season.