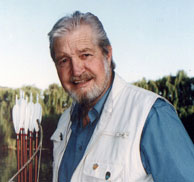 The Archery Hall of Fame & Museum’s new facility in Springfield, MO, will include a display recognizing Doug Walker, the late Bowhunters Hall of Fame’s founder, and all BHOF inductees through 2011. Walker passed away in early last year and no further BHOF inductions are slated. The announcement was made today by Diane Miller, AHOF Executive Director, who said ongoing discussions between Board members of both Halls have resulted in an agreement designed to recognize the BHOF’s place in archery history.

“I’m confident that this Board-approved action will preserve and protect the history and integrity of the Bowhunters Hall of Fame,” stated Dave Gordon, BHOF Chairman. “I also believe that by blending the BHOF into the Archery Hall of Fame we have eliminated any confusion that has existed since 1994 when our sport’s finest were being recognized by two Halls of Fame.”

“This is a logical step that needed to be taken,” said M. R. James, AHOF President. “Doug Walker was the heart and soul of the BHOF. His passing could have been the death knell for his vision, but now Doug and other inductees will have permanent recognition at the AHOF in Bass Pro Shops super store in Missouri where millions of visitors can discover and explore the rich history of archery and bowhunting.”

Founded in 1971, the Archery Hall of Fame recognizes outstanding individuals whose lifetime contributions to archery at the national level have earned them the respect of their peers and a nationwide following. All inductees have been formally nominated and voted on by a panel of electors including historians, members of the archery industry, media, and related groups and organizations. AHOF categories include bowhunter, coach, competitor, contributor to the sport, educator, influence on the sport, innovator/inventor, and lifetime achievement. To date, 72 qualified men and women have been elected to the Archery Hall of Fame. That number includes the Hall’s five newest members.

for more to to: AHoF
for Doug’s Interview go to: Straight Talk – Doug Walker