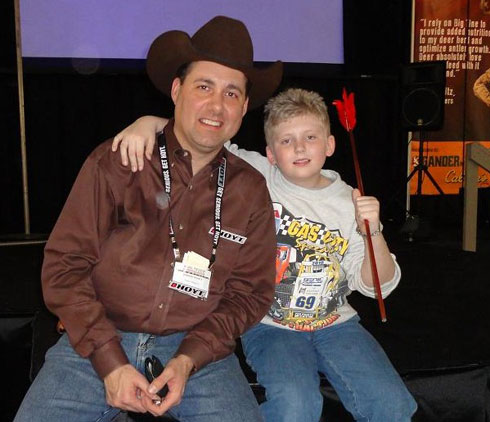 Who would have guessed that 58 years ago when Harry Renfro started a sports show that it would continue to grow to this day and reach 650,000′ of exhibition space in six big buildings at the Indiana State Fair Grounds?   This show is easily one of the country’s premier sports shows.  About 15 years ago, they added the “Indiana Deer, Turkey and Waterfowl Expo” to the already successful Ford Indianapolis Boat, Sport and Travel Show.  The main sports show runs ten days and the Deer, Turkey and Waterfowl Expo runs for three of those days.  For one ticket, people can walk through the entire show.

Today Kevin Renfro, his family and staff run a great show.  I am sure Kevin’s father Harry would be proud.  Archery Hall of Fame member Ann Clark used to do her archery exhibition at this event and I think it’s always cool to follow in her footsteps at some of these older, well established shows.  There aren’t alot of the old sports show families still around… I do shows for the Halls, the Cenaikos, and the Renfros and maybe a few others.  But most of the old family shows have been purchased or no longer exist.

The Deer, Turkey and Waterfowl Expo was packed all three days.  Saturday you could barely walk the isles.  The exhibitors were all busy and everyone looked content to be at a sports show on a February afternoon.  I did two TV media interviews at the show and five exhibitions on the huge new mainstage.  They called the stage the Big Tine Hunting Seminar Stage.  It was showcased in the middle of the show floor and attracted big crowds at every show.

Tim Tebow gets a lot of flack for his use of John 3:16, prayer and Christian faith. Personally I’d much rather have a role model like that for young people that some of the others offered as “role models’ these days.

Anyway, I often use Mathew 17:20 when the time in my archery show comes for the three mustard seed shot. I dedicate the shot to the late Rev. Stacy Groscup. This weekend I was at an event and I had two TV interviews and five exhibitions. Had a different thrower for each show. None of the throwers had seen my show before and I managed to do the full show with each thrower, down to the mustard seed shot.

Sunday afternoon my last show was very special. First of all, one member of the audience made it special–more on that in a minute. But I also had a special thrower that day, Mike, a friend of a friend who served in the special forces in at least three countries and was medically retired. He was my thrower and did a fantastic job. The show went fine but it took me maybe 5 tries to get the three baby aspirin with three arrows… behind the back of course. Next I hung the black towel up on the net and announced for some volunteers to come up to help spot the mustard seeds for the audience and confirm the hit. The seeds flew up… and in one split second I sent the arrows on the way. The shot felt good ( we all can tell when it’s 100% right) and the three arrows nailed their targets. First try. Mike, the thrower, wanted my attention and I handed him the mic.. he announced to the audience that I had put a grove in one of the seeds with a field point–creasing it maybe 1/3 of the way through. It was the coolest thing. I do not know the math but I’d say the odds of this are very small. We usually nick them with a field point and they fly away. This one shot straight down and caught Mike’s eye so he picked it up. I think his eyes must be pretty sharp to have even seen this seed fly straight down.

That isn’t even the cool part of the story. After the show, a dad brings a little boy over to me. He said, “My son wants to buy one of your arrows. How much?” I said, “I don’t sell them…. but wait right here..” I went back to the show office and got an old, well worn arrow from my gear. I took a sharpie, signed it and gave the young man an arrow. He hugged me and said, “God Bless you.” After he walked off with the arrow his dad told me he’d had 20 surgeries and had had a liver transplant. Then the little boy came back to get a photo. He was all smiles and so happy.

Sometimes what I do has rewards far greater than having me or archery in the spotlight, the money, or any of that… it’s that you make a difference to a young person. At that point, it really is the coolest job in the world. I pray that this young man has a long, and healthy life filled with happy times. I hope that arrow is a quiet reminder to him of a friend he made that day. Meeting him was the highlight of the show for me.

This was the 58th year for their sport show. I love this show. It’s always fun doing shows that my friend Ann Clark did when she was doing shows.  I also did some radio, two TV appearances and five exhibitions at this show.

Increase Your Turkey-Hunting Success with a Stealth Vision Hat