Brown Bear Hunt: An outfitter we have worked with for many years in western Alaska in the Kilbuck Mountains has 2 brown bear spots left from Aug. 19th – 29th. Mark actually booked his own brown bear hunt here Aug. 10th for this year. The hunt is conducted during major salmon spawning time frame and bears are concentrated on this food source. Hunting is done where you’ll hunt various fishing holes along the river and floating new portions & moving camp every couple of days to keep in fresh areas. 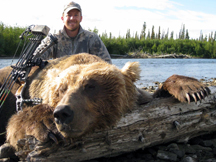 Outfitters is a Master Guide will a couple of excellent bowhunting guides. Hunt includes brown bear, black bear & wolf with no additional trophy fees, and world class fishing. Hunt is normally $14,500 and is now discounted to $12,000. There are 2 spots available – each hunter would be floating different portions of the river with his guide. You can expect to see brown bears daily. Average bears being taken are 8’6” but, we have had clients take 9’ bears here as well. Logistics are that you would arrive in Aniak on the morning of Aug. 19th, and be flown to camp (extra $400 round trip for bush flights). Hunt begins Aug. 20th. You’ll be flown back to Aniak on Aug. 29th, and you can catch a flight back to Anchorage that evening, and home on the 30th. 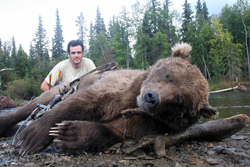 Discounted Fly-in Black Bear Hunt: This hunt is in extreme northern Alberta near Lake Athabasca. Area has only been hunted once in the past 4 years due to the economy and should be a serious consideration for anyone looking for opportunity to take a really big black bear. We have booked clients in this camp for past 12 years and past outfitter passed away unexpectedly and new outfitter took over 4 years ago and Mark went up to check on the operation. It’s a great bear hunt and area has always produced trophy bears – fact that area has only been hunted once in past 4 years will just add to potential this spring. They hunt out of a main lodge on McNalley Lake just south of Lake Athabasca and they hunt from 2 different spike camps on large lakes in the hunt area. Main lodge has great walleye and pike fishing, spike camps provide great pike fishing. Spike camps are comfortable wall tents. Due to extreme northern location and transportation by float plane, they need to be assured of ice out conditions so they hunt later than many other bear camps, starting May 23rd as first week. 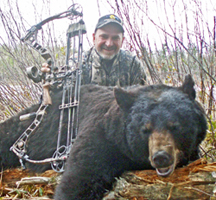 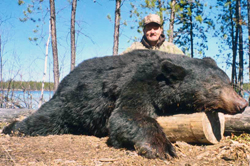