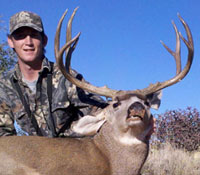 The holiday season is usually a time to spend with family and friends, but if you’re an Arizona bowhunter it also means the desert mule deer are rutting. Leading up to the hunt I had been shooting my PSE X-Force every day from 20 yards out to 100 yards to prepare for the open desert hunting scenario. The release I was using was the Equalizer release from Goat Tuff Products. The Equalizer is a revolutionary Release Aid that enables the user to increase draw length up to 3” thereby increasing arrow speed. I normally have a 26.5” draw length but since shooting the new Equalizer I have been able to comfortably and confidently shoot my bow with a 29” draw length. Increasing my bow’s draw length has gotten my arrow speed increased 33 feet per second and gained close to 10 pounds of kinetic energy at the same poundage!

The 2011 hunting season began with me not getting drawn for a rifle deer tag so I had another chance to pick up my bow. I had passed up a couple coues deer in the early archery season hoping to arrow a big mature whitetail in august. The early season turned out much like most people who bowhunt for coues deer. No deer on the ground (you can’t shoot a hundred inch coues deer every year with your bow!) .I had grown up hunting the elusive Coues deer my whole life and have shot quite few with my rifle and my bow but the mule deer was never on my radar until December 2011.

The December archery season started on Friday December 9th with little to no rutting activity throughout the state. I had decided to go after a mature desert mule deer because they generally start rutting before the new year. I had spent countless hours in the desert searching for a desert trophy with no luck. I found a lot of young spikes and small fork horns but nothing that was a good respectable trophy.

December 16 everything changed and it seemed like the rut was on. I had gone out on an evening hunt with some good friends and right away we glassed up two mature bucks on a ridge surrounded by about 20 does about 800 yards away. I had moved in to get a closer look and the two bucks were both going around to each doe sniffing around and posturing toward each other. One buck was a main frame 3×3 that had a crab claw on his right g-2 that made him a 3×4. His horns were a chalky white with not a lot of mass which generally means a younger buck. The other buck was a 26-27 inch wide 3×4 with deep forks, great mass and dark chocolate horns. I made my mind up and went after the dark horned 3×4.

This buck was wise, he would go to a doe and sniff her and then move to the next doe until he had checked them all then he would move to the next group of does. I tried to get between him and the does but I just couldn’t move fast enough without being loud or seen. I watched him walk over the ridge at last light and hoped to get on him the next morning.

My alarm went off the next morning and while I was putting on my camouflage I could not stop thinking about the big wide 3×4.I got on my hill and started glassing as soon as I could see in hopes of locating the buck again. I was finding deer all over the place but could not locate the big buck. There were spikes and forked horned bucks running does all over the place but no mature bucks so I decided to go to another area in hopes of finding a mature buck but again, no luck. My dad was hunting in the area I found the dark horned 3×4 on December 23 and had found a few mature bucks. He told me about a 4×4 that he saw in one canyon north of the canyon I saw the 3×4 in. He also found another 3×4 that was running around and had put some stalks on with no luck.

Christmas eve morning my buddy Greg Shivers met me at my house and we headed out to meet my dad in hopes of finding a shooter buck. First light we had glassed up the smaller 3×4 and I was preparing to put a stalk on him. He was at the bottom of the canyon chasing does completely oblivious to the fact that I was 200 yards above him on the ridge. I decided to walk the ridge line down to get in front of him and wait for him to work his way down the wash past me where I could get a shot.

I found a draw that I could slip down to the bottom of the canyon without being seen. I glassed the draw to make sure I would not be spooking any deer while I made my way down. At the bottom of the draw there stood a big 4×4 with one doe. I sat down to watch and see what he was going to do and that was a great decision because I saw some of the greatest displays of a desert mule deer in the full swing of the rut. He was walking around the doe with his nose in the air with a full on lip curl and a swollen neck. He then stopped at a small mesquite tree and started raking his antlers and then just started destroying this tree. While he was doing this the doe slipped away from him and I knew it was now or never.

While he was still destroying the small mesquite tree I started working my way down toward the buck. I got to within 80 yards while he was raking the tree and then all of a sudden he looked behind him and started to posture up. The 3×4 had worked his way down the wash toward him and the big buck did not like this at all. He laid his ears back and put his head down as he walked toward the smaller buck. I thought I was going to witness a battle royal within 100 yards between two mature desert mule deer.

The smaller 3×4 was posturing toward the bigger buck as they walked toward each other. Both bucks were trying to get a smell of the other buck so it looked like they were on a never ending merry go round. Finally the smaller buck started to walk away but the big buck was hot on his tail making sure he didn’t pick up any of his does on his way out.

While they were walking away I stayed as close as I could to them without being seen. I stayed within 100 yards the whole time walking along the wash bottom. When I got to a clearing I tried to put eyes on the bucks but I could only see the smaller 3×4 and had no clue where the bigger buck was. Greg called me on the radio saying the big buck was 70 yards in front of me walking away from the smaller buck. About 2 minutes later I heard a tree being demolished by horns and knew it had to be the big buck.

I hustled to where I heard the crashing and sure enough, there he was, 92 yards away just thrashing a tree. Best part, he had no idea I was there. There were two does on a little knoll about 120 yards to my right and the buck was to my left. When the buck was done raking the tree he saw the two does and started working his way toward them. As soon as he was in the open I let out a snort wheeze and he stopped perfectly at 60 yards. I was already at full draw so I settled my 60 yard pin right behind the shoulder and squeezed the plunger on my Equalizer release. My arrow was equipped with Goat Tuff Opti Vanes on the back end and a Rage 2-blade at the front. The arrow flew perfect as I watched the Nockturnal nock disappear behind the bucks shoulder.

The buck hunched up and kicked as it ran off out of sight. I immediately tried to glass up Greg to see if he could see where the buck ran or if he could tell if it was a good hit. I was confident in my shot but I just wanted to make sure. At the angle Greg was he never saw the buck or me because we where behind a small ridge. I sneaked up to where the buck was standing and found my arrow stuck in a cactus 10 yards behind where the buck was standing. The arrow was full of good dark blood. I was now confident that I had bagged a true Arizona Desert Mule deer buck.

I found the buck about 60 yards away after following an easy blood trail. He ended up taping out at 159 6/8 inches and to say the least, I was tickled pink with him! I really believe that had I not been shooting the Equalizer release I doubt I would have had enough arrow speed to shoot that distance as accurately as did. I don’t think that shooting my old release and not having the extra performance I would have been able to pull this 60 yard, pass through shot off. All things considered the Equalizer release has made me a more lethal bowhunter. The Equalizer has expanded my range and confidence, especially when shooting at longer distances. I will never shoot another release for the rest of my life, this is the most comfortable, accurate release I have ever shot and it allows me to shoot a 29 inch draw bow, gain arrow speed and still shoot the same draw weight