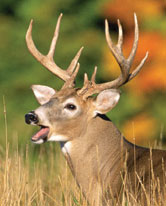 As a gun hunter chasing the wily whitetail deer, I had heard about “Buck Fever”. To be quite frank, I had discounted Buck Fever as nothing more than an overly excited hunter who could not handle the pressure. I felt there was no way a hunter could get so excited that they could not make the shot. Simply put, “Buck Fever”, to me, was no more than an excuse.

I had dabbled briefly before with bow hunting only to drift back to my gun but having gained access to some beautiful whitetail deer lands in North Carolina stirred my interest to once again pick up the bow. In parts of North Carolina the gun season does not start until just before Thanksgiving while the bow season begins in early September. In South Carolina, I learned as a young hunter to appreciate early season hunting to include the pre-rut. Limiting myself to gun only eliminated early season North Carolina hunts to include the pre-rut.

The trip to North Carolina was my first serious bow hunt in over five years. My last hunt five years before was a disaster. Scouting was not the issue. A good friend who has since passed away did the scouting for me and put me in a prime spot on South Carolina Department of Natural Resources (SCDNR) public land. I did not have a climbing stand but another friend loaned me an older heavy stand that I was not familiar with. He explained that the metal seat, which could be set against or away from the tree, was missing several hold down bolts. Procrastinating as usual I opted for electrical tape to secure the seat versus obtaining the correct bolts.

In addition to this act of poor planning, I never practiced with the stand before heading to the woods. My hunting buddy skillfully directed me to the “spot”. I found the area where two deer paths joined into one. My location was perfect; prime travel area through a woods “island” along an old rice field now covered with native South Carolina low country marsh grass.

On the way to the spot I saw a small spike that was oblivious to me. I waited and as I hoped he slipped into the marsh never spooking. I found a perfect tree and proceeded to set up my buddy’s climbing stand. In the process I seriously pinched a finger on my none trigger hand. The bleeding would not stop and unfortunately I had no Band-Aids. I ended up having to make a bandage from my tee shirt. Fortunately the bleeding stopped. I proceeded up the tree and settled in.

Late morning a doe came just out of my range. Late afternoon several more deer moved to my right along the marsh edge. I could not tell what they were. SCDNR rules allow us to shoot a doe and buck with at least four points on one side. As the hours of the day slipped away, I decided to stand up in my stand. I wanted to be ready if a deer came my way. I moved the metal seat to the front of the stand and used my electrical tape the “secure” the seat in place. I nestled my back against the tree, laid my bow across the front of the stand/seat and waited.

About an hour before dark noise in the marsh caught my attention. I looked and sure enough a shooter buck was coming my way. The eight pointer was coming down the path that led right to me. This is when disaster struck at its worst! As I picked my bow up the string caught on the metal seat making a loud clanking sound. Needless to say the eight-point buck abruptly change directions and disappeared into the marsh never to be seen again. I had learned several lessons the hard way this day. First, know your equipment and ensure any defects are corrected before hand. Not becoming familiar with the stand set the stage for the finger injury and not fixing the seat correctly set the stage for my buck to be spooked. This day I experienced two very painful lessons.

My next bowhunt was a trip to NC and one made by myself. I looked forward to this one too as I had been gun hunting the land for some number of years and had a good idea of where to hunt. My plan was simple. I would set my climbing stand on the edge of a Laurel thicket when I arrived at the property and make the most of the afternoon by hunting until dark. The next morning I would hunt from a natural ground blind below a field were the deer typically fed at night making their way into the woods for cover at daylight. A couple of hours after daylight, I then planned to move back in the woods to the stand I set up the day before.

I settled in my stand a good two hours before dark having a good view overlooking a small hollow. Above me was a Laurel thicket that provided good cover for deer to and from the field. Even though it was early September, I still value the use of buck attractant scents. My favorite scent is Tink’s No. 69 Doe-in-Heat.

I was in the stand about an hour when I caught a glimpse of the buck below me. As he worked his way toward me he put his nose up obviously testing the air. I was convinced the Tink’s had done its job. I grabbed my bow, secured my release to the loop and then the reality of everything sunk in. I could not draw my bow.

When I decided to get serious about bow hunting I turned to the books, so to speak. I read various articles looking to learn as much as I could. One article focused on “Buck Fever”. I had never fully understood the phenomenon primarily because I had been closed minded. The author explained that the adrenalin rush fools the body into thinking it has been traumatized. In the event one is seriously hurt, adrenalin is released as part of our body’s chemical defense mechanism. This release of adrenalin sets the stage for our involuntary muscles (e.g. heart, muscles need to maintain balance, etc…) to get priority for control while our voluntary muscles (e.g. those needed to draw bow) take a back seat, so to speak. The author explained that overcoming Buck Fever is as simple as closing your eyes and taking a deep breath.

The buck was right there; no more than twenty-two yards and I could not draw my bow. Fortunately I had decided to learn as much as I could about bow hunting to include how to deal with Buck Fever. I closed my eyes, took a deep breath and calmed myself down. I was then able to draw my bow and make a good shot.

The buck disappeared over the next ridge as I watched and listened intently I thought I heard the crashing sound of a downed deer. A clean pass through Victory resulted in my first kill with bow, a nice six point with a 15” spread.

I hope that you take away from this article a simple message; to be the best bow hunter you can, you must be a good student. How do you become that student? You must be open-minded. For example, don’t blow off a topic like “Buck Fever”. Know your equipment and forgive me for the cliché, “Practice makes perfect”!

for the best in arrows go to: Victory Archery

Getting Started in Archery