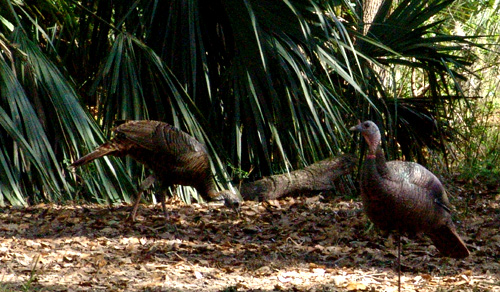 The morning started and stayed still and I sporadically called and kept a vigil on this new area. It produced no sightings and I did not hear a turkey, neither gobbler or hen.

David Mills phoned and said to meet him in Arcadia. He had another ranch for this evening’s hunt.

Dave introduced me to the landowner and he took me to a spot where turkeys work a pasture area. I set up blind and hen decoy and got inside the blind. Mosquitoes were out this afternoon and I turned on my ThermaCELL to run them off and kicked back to see what would happen. All was quiet most of the afternoon.

Then I heard a hen yelp behind my blind. It continued to yelp and putt all all the way to my decoy. 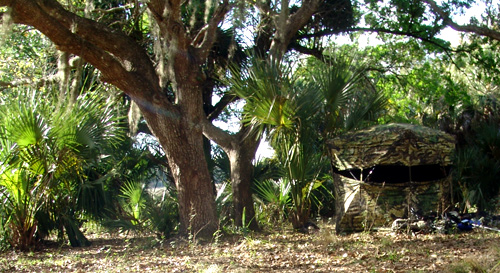 It approached my hen decoy in an aggressive posture. I have seen this before. It circled the decoy and then began it’s attack. It jumped on the decoy, backed off and hit it again. This one sided fight lasted a couple of minuets. I filmed it all. This gave me great confidence in my decoy. If it fooled her, it will fool other wild turkeys as well.

That was my entertainment for the evening as I did not see another turkey.

CONTINUED…
The 2012 Bowhunting.net Grand Slam Bowhunt is sponsored by:

Scent Control to Get your Trophy Buck

MidwayUSA Goes Green and Teams up with FrogLube