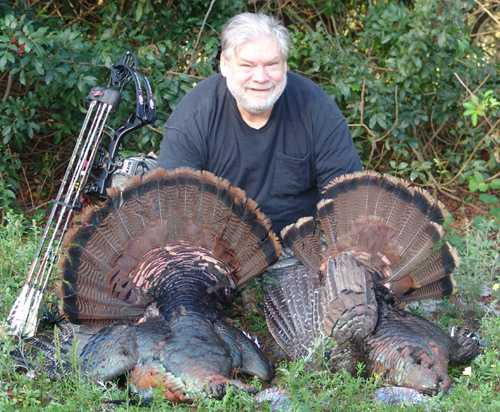 Fred Lutger with his Osceola double in "F[

When I talked to my host, Eugene, he mentioned I could fill my second tag if I got the chance. So the next morning I set up at the same spot. That afternoon a hen walked by and I remembered the video camera I had not used earlier to film my previous  day’s hunt. It hadn’t even crossed my mind to turn on the video camera when the longbeard came up. Oh well, I’ll have more wild turkey hunts this year I can try and film.

As the hen got closer I picked up the still camera and snapped some shots of the hen. When she left I stuck the call in my mouth and made some soft yelps. In less than 2 minuets, without a sound I saw a bird approaching from my left. I saw it’s beard and then the red head. I picked my bow up from the ground.

The wild turkey walked up to my decoy and stopped. It was a Jake. When it turned my way I didn’t hesitate and took my shot. The arrow hit the gobbler directly in the chest. It took one step and collapsed. It’s head stayed down and it didn’t move. It was over.

I had just taken my first Osceola double. I called Eugene. “OK, pick me up,” I said. We both whooped and hollered as I related my hunt.

David Mills wife Amy had a great spaghetti dinner that evening and we finished it off with strawberry short cake for desert. I get to sleep in tomorrow morning. What a glorious day this has been. Having completed my fifth Grand Slam with a bow was fun. But my biggest joy was the enthusiasm of my friends that made it really meaningful.

And what did I just hear to the west? Was that a gobble of one of those hill running, cactus jumping, rattle snake dodging, Rio Grande red headed, long bearded, south west gobblers?