Getting Deadly Close to Turkey

by Jim Brennan
in Bowhunting Posts
0 0
A A
0 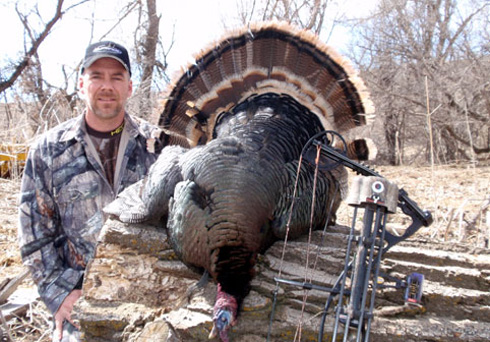 I have been turkey hunting for close to thirty years from the East coast, to Iowa and the prairies of Nebraska and the mountains of Montana. I primarily use archery equipment for these birds but have taken a shotgun to the field on rare occasions. I have had some good hunts and some not so good. I usually always use decoys in my hunt and for the most part they work very well. With bow hunting these birds it is almost a must to use decoys. A few years ago I added what I feel is the ace in the hole for getting birds close to my decoys and a good clean close shot for me. It is a product called HECS STEALTHSCREEN. HECS STEALTHSCREEN is a revolutionary line of clothing that utilizes science to prevent the emf (electromagnetic fields) that all living creatures produce, from leaving the body and being detected by animals. Animals have the ability to pick up these emfs which accounts for all those times game just seemed to know something was wrong in their environment. We’ve all witnessed this if you’ve spent any time in the field. Science has proven it and I can tell you, HECS works.

I have worn HECS STEALTHSCREEN garments over the last few years and my tags have been filled almost every time. The birds seem to disregard my position whether in the blind or up against a log pile or like this past season stalking them. Yes I said stalking them. This spring I made my annual trip to Nebraska with some friends and went to our usual spots. The turkey numbers were down due to a long hard winter and cold wet spring. We still had snow in quite a bit of areas we hunted. 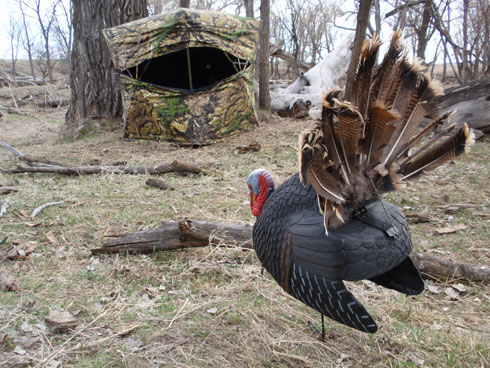 My first hunt was more of the traditional type of setting up a blind and a decoy spread. Calling them into an area where the birds travel from roosting and feeding. I had birds all around me and they paid no attention to my blind. The birds walked by mere feet of the blind and interacted with my decoys. I usually place them very close to my ambush set up and I mean close. I like a 5 to 8 yard shot if possible. They are a tiny moving target and the closer the better. By wearing my HECS I can feel comfortable with the birds this close to me and be sure of these close shots. They come in very close and stay close without detecting my intentions of taking them home. This bird was shot at 5 steps and did not make it 10 steps from my blind.

My second Nebraska bird was taking in a very strange way by stalking. I had been sitting in a small pass between two valleys and in a travel route for these mountain birds. I would see them on both morning and afternoon hunts but they never came close enough to my set up. For three nights the birds would do the same thing; assemble in a huge group, establish pecking orders and fight and peck one another on their way to the roost. With my hunt coming to an end the next day I decided to put my HECS to the ultimate test.

I would climb out of the blind and work my way around the front of the steep rock bluff where the birds were staging before flying up to their favorite roost. They use the high peak as a runway to get a good running start and pitch down to an old dead pine. The problem I had was that due to the fact of hunting in the blind that afternoon I had on my usual black top and face mask. It was too cold to strip down to a camo layer so I figured I would give it a shot anyway.

Dressed like a black ninja cow I worked my way around one side of the bluff as the birds worked the other side. I rounded the face and instantly found close to 40 birds working the hill side. There were a number of mature Toms, several Jakes and a slough of Hens. I figured that I would just walk right at them and see if I could get close enough for an archery shot. To my total disbelief I was closing the distance on them. Several of the birds now only less than 15 yards away did not fly, run or give the alarm putt. In fact these birds went about their fighting as if I was not there. In full black top walking on a light colored sand bluff I was able to close the distance on 2 mature long beards to a close distance of 9 yards.

These 2 birds were walking straight up the hill at me and I came to full draw. Both birds saw me draw and just kept coming. As I settled my top pin on the closest bird, which was now at 6 yards I shot right where the beard comes out of the Merriam’s. A quick flap and a few flops later and my bird died within 15 seconds and went less than 10 yards. I could not believe that it worked. No doubt without question my HECS made this possible. While I was recovering my bird the rest of the flock walked around me and pitched into the pine for the night. HECS is the real deal. 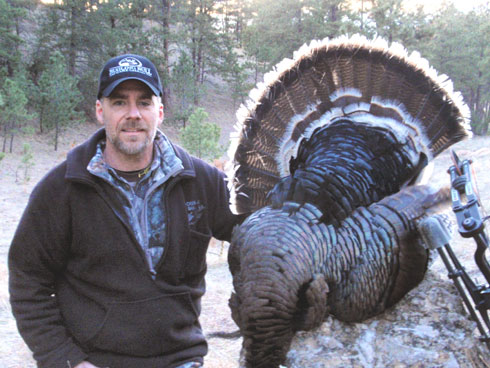 Here in Montana by my house are big mountains and vast timber. These hearty birds last through deep snow, long winters and cold wet springs not to mention predators year round. Extensive scouting and a lot of miles put on the truck or foot has me locating several groups of birds. I find where these big ranches keep their livestock or horses will find birds wintering.

Opening morning it was the usual here in the mountains. Snow and cold weather greeted me in the blind. Armed again with my decoys, archery tackle and wearing my HECS outfit I set up on some forest ground. At first light the sound of gobbling mountain chickens echoed across the basin. I knew that I was in the right spot but also knew it would be a while before these birds made it over to my side of the timber. I let out with an occasional call just to let the hens know where my ambush was located and the wait continued. By 9 am I started to feel the cold of the damp 25 degree morning but was soon warmed by the sound as several birds sounded off answering the hens who were on their way. I used my moving tail fan on the decoy to entice the flock closer. 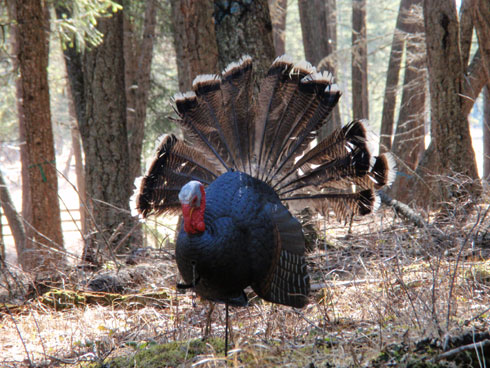 Once the mature Toms in the group saw my intruder they could not resist coming over to run him off. Again, my decoys were set up less then 10 yards from me. One hen and one strutting Tom made up the spread. This proved to be too much for one particular long beard. He ambled into my range of my top pin and strutted and displayed for the last time. I shot him at less than 4 steps. The arrow hit home and he stumbled back to where the decoys were and expired. 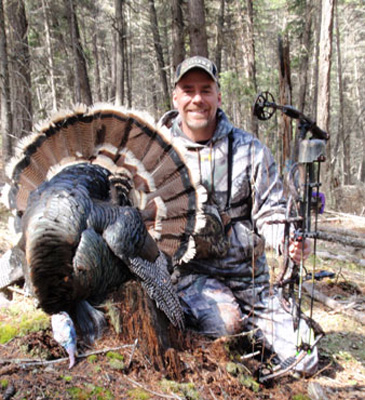 At that time the rest of the flock ran in and began pecking and attacking my dead bird. I was still in the blind and for the next 20 minutes I witnessed several more long beards and jakes mill around that had no idea I was there. I can only attribute this to the HECS again and even as I exited the blind the birds walked off but never did fly to escape my threat. I was able to snap some still photos of these birds right before and after I took my bird. 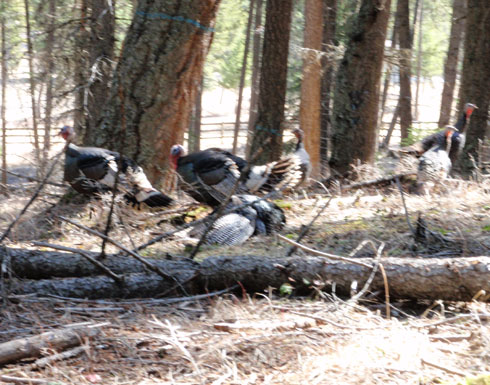 I’m a true believer in HECS. If you want to get closer to game,  HECS will make a believer out of you too.  So don’t wait, turkey season is here. Get Deadly Close with: HECS STEALTHSCREEN