Getting Started in Archery 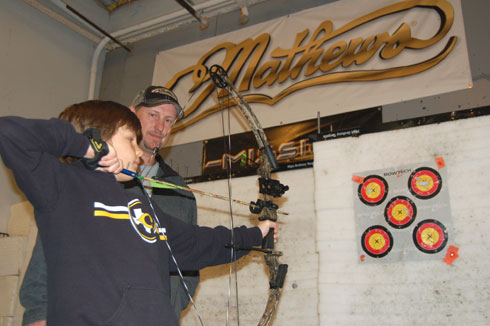 BowTech's Steve Trimble with All Star Archery helps young Jack Zimmerman get set up with his first bow. Photo by Luke Clayton

Getting started right is important, regardless the endeavor. Take an academic such as algebra for instance. Without proper instructions from the get-go, learning algebra is impossible. One has to build on the basics before it’s possible to advance.

This axiom is especially true when it comes to learning to properly shoot a bow. There are a few basics that must be learned and mastered before skills improve and arrows can be shot into tight groups at distant yardages. Steve Trimble with All Star Archery makes his living setting up bows to perfectly fit shooters of all ages and, if they are newcomers to the sport, giving instructions that help them quickly become proficient shooters. I recently took my 10 year old grandson Jack Zimmerman over to get his new Mathews Genesis bow set up.

Jack is not a newcomer to the outdoors, he’s taken several whitetail deer while rifle hunting with his fraternal grandfather. Jack is a very patient, studious young hunter. He’s learned to be quiet and still when hunting and moves only when game is not looking his direction. He’s steady as a rock during the shot for someone so young and veteran hunters I know enjoy listening to Jack tell about his hunts. There’s no ‘Hollywooding’ when Jack tells his story. It’s all nuts and bolts with plenty of details.

Jack is reverent when he approaches an animal he has killed. He understands and used the word “killed’, one ‘harvests’ grain or vegetables. Animals must be killed before they can be transformed into hot links or chicken fried steaks! Even at his young age, he understands the gravity of his actions. He is aware that taking meat from the wild for his family to enjoy is an honorable act. He understands that some of his friends think that the steaks and roasts their mothers prepare for dinner magically appear at the meat counter of the local grocery.

Jack has learned from hunting that in order to enjoy a venison steak dinner an animal must be killed. He understands man is at his core, a hunter just like the coyote or bobcat. Many in today’s urban world have been so displaced from the natural world that they no longer feel the hunter’s call but, deep, deep in their genetics, it’s still there. Jack fully understands the venison or wild pork he is fortunate enough to take for his family to eat could just as easily be killed by a roving pack of coyotes or, a big male bob cat; it’s nature’s way.

Jack is extremely observant regardless whether receiving instructions from his basketball coaches or, learning the basics of a brand new sport. He was full of questions as he observed “Mr. Steve” installing sights, arrow rest and string peep on his new bow.

While watching Trimble put the finishing touches on his bow, Jack asked questions such as “What keeps that little peep sight in the string?” and “What makes the end of that little pin so bright?” Steve took the time to answer them all and then he handed the bow to Jack and asked him to step over to the shooting range. It was time for some instructions.

I was honored to be present when my grandson loosed his first arrow from his fully rigged bow. Trimble instructed him not to grip the bow too tightly and to gently squeeze the release when the sight pin, the center of the peep sight and the target are in perfect alignment. “Make sure and keep your finger behind the trigger release so you won’t accidentally release the arrow while drawing the bow.” My mind back tracked many years ago to when I received the same basic instructions. Some things never change and the basics of archery have remained as constant as the Polar Star throughout the ages. Pulleys, peep sights and arrow rests are modern additions to the bow but skills necessary in making the arrow fly true remain the same.

Jack heard the resounding ‘whack’ as the arrow impacted the target, not far from where he was aiming. His next two arrows grouped very close to the first. Trimble instructed his new student to continue practicing as often as possible. “Concentrate on the shooting form I’ve shown you and don’t overdo your practice.” instructs Trimble. “ Shoot 5 or 6 arrows and then rest a couple minutes. It’s better to shoot 10 arrows using perfect form and making sure to execute each shot to the best of your ability than to randomly shoot three times that many.”

Jack’s serious bow training is underway. He left ‘Mr. Steve” with a bow that was expertly rigged and ready to shoot. He’s learned that when he employs the basics of proper shooting form, he is quite capable of hitting his target at closer yardages. Longer range shooting and ultimately hunting with his bow will come a bit later, after many enjoyable hours of practice.

Here are a few things Jack will learn as he perfects his shooting skills and ultimately, makes the decision to hunt with his bow. I’m positive he will become a bow hunter. It’s in his make up, he loves a challenge and he loves to hunt.

And, I’m betting Jack won’t ever forget that morning he spent with ‘Mr. Steve’, getting his new bow rigged and watching his first arrow reach its mark! Jack’s journey has begun!

Listen to Outdoors with Luke Clayton Radio at www.catfishradio.com. Email Luke via the web site with hunting and fishing news from your area.

How to Call Whitetail Deer - Part 1