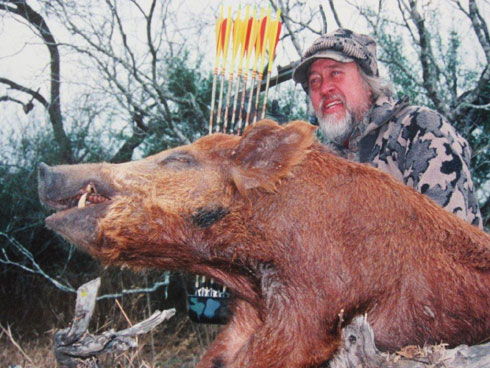 Here's the reddish-colored wild boar I stalked and arrowed on a Lone Star hunt one winter after another season's deer hunting opportunities had ended. Free-ranging hogs offer off-season adventure and challenges to bowhunters looking for an affordable hunt involving a different kind of game animal.

THE HUSKY, RED-HUED TEXAS TUSKER was rooting along a well-tracked game trail when my Easton arrow smacked him in the ribs. Grunting, he spun and crashed away into the brush like a runaway dirt bike. The 25-yard shot looked perfect, entering the broadside hog midbody behind his muscular shoulder. I figured he wouldn’t go far. And he didn’t. No matter how big and tough an animal is, it can’t last long after a shaving-sharp broadhead slices through both lungs.

I arrowed my first feral hog in 1963  and over the years since I’ve hunted everything from so-called Russian boars and feral pigs to true descendents of the wild hogs first imported from Germany and Russia into New Hampshire, New York, Tennessee, and North Carolina in the late nineteenth and early twentieth centuries. From the Great Smoky Mountains to the Florida and Georgia lowlands, not to mention dry Texas brush country, I’ve trailed packs of baying hounds, sat in stands or blinds near rooting areas  and used spot-and-stalk skills to hang porkers on the camp meat pole.

Off-season hog hunts are a welcome and challenging diversion for bowhunters wanting to head back afield after deer season finally ends. Truly wild, free-ranging tuskers, unlike those bred or trapped and sold to high-fenced shooting preserves, live by their wits and finely-tuned senses. They’re equipped with finely tuned, saucer-shaped snouts which locate food and warn of danger. Their hearing is equally keen. Eyesight is only fair but like many game species hogs are quick to pick up movements but often overlook motionless hunters.

Personally, I prefer to locate a lone boar (the bigger hogs often lead solitary lives) or stalk small groups of feeding pigs. I’ll check the wind, plan my approach and take plenty of time easing within good bow range. That’s exactly what I did that December afternoon on a Lone Star whitetail hunt as Janet and I were checking out a new hunting area.  After spotting the reddish tusker mentioned in the opening paragraph, I told my wife to stay put, sized up the
direction the hog was heading, angled to get into shooting position ahead of him and arrowed him as he moved past. The boar didn’t travel 50 yards after the well-placed shot.

Frankly, hogs can be hard to kill, especially when chased or bayed by packs of trained hounds. Naturally tough, wiry, and short-tempered, yet surprisingly fast and agile in spite of their bulk, alarmed or angry tuskers become super-tough animals and a possible threat to any dog or man that ventures too close. Seems the adrenaline surging through their veins can make them seemingly impervious to bullets and broadheads. All wounded hogs deserve extra respect because those animals pose a real threat. Caution and common sense are mandatory at such moments during any hog hunt.

Gregarious sows, their piglets and younger boars often hang together in family and bachelor groups. Noisy and opportunistic feeders, they may be easy to locate in tall grass or thick brush by audible oinks, grunts, and squeals. Omnivorous animals, wild hogs boast a diet that includes everything from nuts, fruits, roots, grasses and grains to birds’ eggs, rabbits, snakes, mice and even fawns … plus just about anything edible they stumble across in their daily foraging. Active early and late during daylight hours, they also can be found up and about at any time of the day. Excessive hunting pressure may turn hogs into nocturnal feeders.

Younger hogs generally make the best table fare. The hulking heavyweight boars with long curving tusks are the trophy animals hunters shoot for bragging rights. Hogs come in a wide variety of colors and weights, though many are black. Whatever the color, hog hair is stiff and bristly. Incidentally, that Texas boar I tagged tipped the ranch scales at nearly 250 pounds. Truly big boars weigh upwards of 300 to 350 pounds  and I’ve seen a handful of hogs that
exceeded 500 pounds on the hoof.

Keep in mind that wild, free-ranging hogs offer bowhunting challenge and excitement to anyone seeking relatively inexpensive off-season adventures. If you’ve never given it a try, why not add a hog hunt to your bucket list? Most any bow, arrow and broadhead set-up that’s good for deer, elk and bears will do the job nicely. Just don’t forget to pack along your favorite binoculars and a camera for trophy pics. Of course, if you’ve already bowhunted tuskers, you already know the gear you’ll need as well as the allure of getting within good bow range of a different kind of game animal.

CBS’s Big Brother is Looking for YOU for Reality Show!