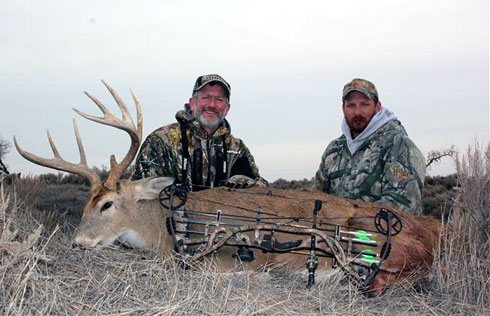 My iPhone chirped at lunchtime last Nov. 15. When I hit the answer button I heard a scream in my lefty ear. “There’s a giant chasing in the river bottom right now!” outfitter Jeff Louderback screamed. I was up at the trailer having a snack so I raced to the edge of the hills and looked. My 10×42 Nikon’s picked them up instantly. He wasn’t kidding. An absolutely gargantuan buck was hard on the heels of a doe. Holy Buckets!

I grabbed my stuff, jumped in my truck and roared to the east end of the bottom, parked then ran to a stand, figuring when it comes to chances, slim is always better than none. I climbed up and was just catching my breath when they sped into view a hundred yards out. Two bucks became three, then four, then five, all racing after a pair of does as fast as they could go. They made a wide circle just north of me, running hard like they were at the Kentucky Derby then looped out of sight to the West. Then they came back, tongues hanging out, steam rising from their nostrils and off their backs in the near-freezing air. At 80 yards two bucks, both 8-points I thought would push 140, slammed on the brakes and got into a knockdown, drag-out bar fight that lasted 30 seconds until they realized that, in so doing, the girls were getting away and they rejoined the chase.

In the middle of the pack was a true giant whitetail. In both body and antler he dwarfed those 8-pointers. When he skidded to a halt at 85 yards, briefly corralling one of the does against a plum thicket I was able to get my glasses on him. An 11-pointer with long, thick tines and bases the size of my wrists, I was able to look at him for perhaps 20 seconds before the doe squirted free and he was off. My mental calculator said “Almost 200 inches and certainly 275 pounds.” And just like that it was over, the deer racing back West again and out of my life.

I saw him once more two days later from the same stand but this time the buck and his doe were drinking from the tank at the base of a lone windmill set a half-mile away, up out of the bottom in the sagebrush foothills. The next day at noon Jeff’s son, Colton, my buddy Steve Sam and I erected a ground blind 30 yards from that tank. Of course the horses had already left the barn and the blind stuck out like a sore thumb but the weather was warm. The region had suffered through a major spring and summer drought and water was at a premium. Except for another tank located in the bottom, this was the only substantial water for a mile and so I thought, why not?

As I killed time in that blind waiting for something good to happen, I thought back to some of the other wild chases I have seen during the whitetail rut. I remembered back to a rainy, foggy day in Illinois one year watching eight bucks trotting single file after a lone doe 75 yards outside the tree line where my stand hung, their order of march determined by the size of their antlers. Another year I killed a 7 ½-year old 8-point in southern Missouri that ran a doe back and forth within range of my tree for over an hour without giving me a shot until, dog-tired, he slowly came to get a drink at the pond near which I’d set the stand for just such an occasion.

Perhaps the most bizarre was the time I was hunting right next to a busy four-lane highway in southern Illinois. I watched two bucks relentlessly dog a doe in a greenfield across the road when suddenly, she raced right across the road and through the oncoming evening traffic before turning and coming down the two-track trail that led to my stand, both bucks in tow. When they did so I heard horns honking and brakes squealing, but amazingly none were hit. That is, until I shot the largest of the two bucks, a 145-inch 8-point.

The chase at Louderback’s was by far the most amazing I have ever seen. I’ve hunted four of the past five seasons with Jeff (LL Outfitters, 620-621-4616 cell; e-mail hunterswarehouse@att.net), who together with his dad own some 50,000 acres near Liberal, Kansas, in the extreme southwestern corner of the state. In seasons past I had killed an ancient 12-point that gross-scored 164 2/8 and a main-frame 8-point with small extra point that went 154 gross Pope & Young points. The first year I hunted here I met Steve Sam, a businessman from North Carolina who has become a good friend and hunting companion. We try and hook up and hunt here every November, both because we like hunting together and because Steve has also shot several good bucks on the place.

An hour before dark two evenings after we set the ground blind up a dandy 9-point came to the tank all by himself to get a quick drink before heading to the bottom to see if he could find a new girlfriend. The blind made him nervous enough that he went wide but not wide enough and my Hoyt Carbon Element launched a Thunderhead right through him at 45 yards. Though he was not the giant I’d seen earlier, how do you pass up a gross 162 buck?

I was working on my gear in my garage in mid-December when Jeff texted me. “The big 11 is down, neighbors killed him during rifle season,” he typed. “Scores 194 & change.” Merry Christmas, buddy.

In springtime it is hard to remember but some states like Kansas have nonresident deer application deadlines due about now. The application period for Kansas, for example, is April 1-27 this year. In Iowa and Illinois the application period is in May. If you’re interested in making a trip to hunt these Meccas you need to get in the draw soon. Good outfitters like Jeff can help you fill properly out the forms.

My Kansas paperwork is already filled out. I know right where I want to be sitting when testosterone levels are off the charts and the bucks are chasing. Maybe that’s why, though November is still half-a-year away, I am already getting my bows tuned and gear ready.