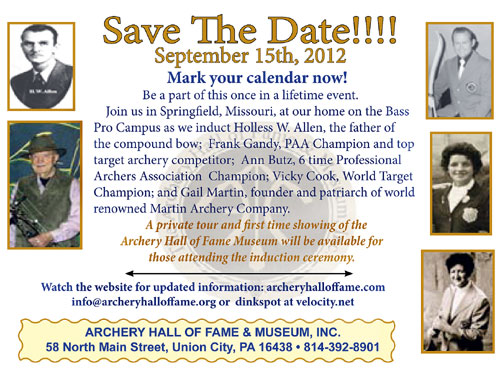 “We are pleased to welcome Gail, Ann, and Vicki to the Archery Hall of Fame,” said M. R. James, AHOF President. “Each has contributed significantly to our sport and is deserving of this exceptional honor and public recognition. They will join the AHOF Class of 2011, which includes Holless W. Allen, the father of the compound bow, and top target archery competitor Frank Gandy, at the mid-September induction ceremony.”

Founded in 1971, the Archery Hall of Fame recognizes outstanding individuals whose lifetime contributions to archery at the national level have earned them the respect of their peers and a nationwide following. All inductees have been formally nominated and voted on by a panel of electors including historians, members of the archery industry, media, and related groups and organizations. AHOF categories include bowhunter, coach, competitor, contributor to the sport, educator, influence on the sport, innovator/inventor, and lifetime achievement. To date, 72 qualified men and women have been elected to the Archery Hall of Fame. That number includes the Hall’s five newest members.

For more information go to: AHoF

Getting Deadly Close to Turkey