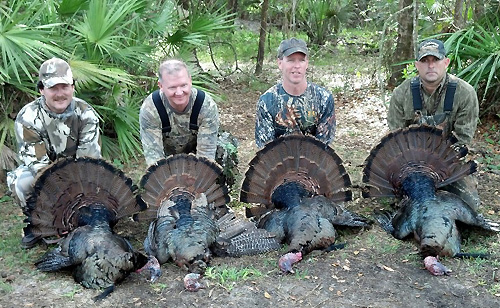 Team Struttn Ruttn N Reeln was ready for the opening day of the South Florida spring Osceola season. David Mills greeted his 4 hunters on Friday and everyone was in the south Florida turkey woods before daylight.

After the hunts David Mills told me. “Shane Jeansonne. Tom Parks and I were listening to birds gobble when my son Colten called and said, “Osceola down.” He was guiding Brian Bear. Brian’s bird flew right to the decoys, a fatal mistake.”

“We continued to call when, like a thief, a giant Osceola stepped out to Shane’s Indian Creek choke tube and # 5s. Another Osceola down, a magnificent gobbler with an 11″ beard and 1 1/2″ spurs .”

“I received another call from Colten, a problem. Two gobblers were pecking the dead bird. They would not stop . A great problem to have. Colten suggested we leave our blind and come a hundred yards from his blind and call. We did. Another Osceola down.”

“In 3 hours opening morning of the 2012 Florida turkey season, we had three birds down. Shane’s bird completed his slam. Tom and Brian’s slam is off to a good start.”

“I got another call from our other guide Ronnie Rauh. Another bird down. Mike Walton started his slam.”

All hunted with a shotgun.

Put the PlotWatcher Pro to Work

Put the PlotWatcher Pro to Work