“Where’s Gene” asked Lee, the lead photographer? “He’s got ‘the look” he said. Little did I know at the time what “the look” would come to mean.

With a face that only a mother (or wife of nearly 34 years) could love you’d think a man of my intellect would have been a bit more suspicious when I received a call from The Brunton Outdoor Group asking if I’d consider being a model for their new catalog. I’ve been asked to do a lot of different things over the years but “model” was not one of them. Backed by years of experience I consider Brunton optics to be the finest in the world so of course I jumped at the chance.

Dani, Brunton’s marketing director filled me in on all the details. I was to arrive the evening of October 12th in Cody Wyoming, home to some of the finest big game hunting in the state. My portion of the photo shoot would be the morning of October 13th. I’d be decked out in the newest Sitka outdoor wear and Danner Pronghorn boots showing off Brunton’s newest optics and other outdoor gear. The 13th couldn’t get here soon enough!

The day before the shoot Dani called and told me they were kind of in a dilemma. They needed an antelope for the shoot the next day and as of yet had struck out. It just so happened I still had an unfilled antelope tag! Well I’m pretty sure now I know where the saying “flattery will get you everything” came from! The next morning, with my hat still fitting a little tight from being asked to model I set out to find an antelope before heading off to Cody. Oh I found them alright, up on a very steep ridge over quarter mile away. My Brunton Epoch’s revealed a decent buck hanging toward the back of the herd and I watched as they “ambled” over the ridge. When they were out of sight I left the Jeep and headed up the slope. Thinking they’d be just over the top I caught my breath and did my best sneak over the top. They were there alright …. Only they’d gone down the ridge on the other side. The buck stopped to look bac and it was his last mistake. Now to get him back to the jeep in condition to “model”…

With the antelope cleaned out I decided I’d have to carry it back to the Jeep if it was going to be in any condition for photos. Now I’ve carried antelope across my shoulders (like you see in pictures) before but that’s when you have someone to help get it up there. By myself on that slope I just couldn’t do it. It went kind of like this … I’d set the antelope on its rear end, reach over my back, grab the horns and hoist it off the ground. I’d then head up the slope, trying to not step on my tongue that was by now dragging in the sage brush! After 50 yards or so I’d set it down, return for my gear then do it all over again. An hour later found me, the antelope and my gear back at the top of the ridge. The antelope was still in “model condition” … me, not so much. Then it was off to Cody.

The morning of the shoot arrived. We were all decked out in new Sitka gear, Danner boots and Brunton apparel. The antelope was first up for photos. About mid way through the antelope shoot the phone rang. It just so happened that a woman arrived at one of the local taxidermy shops with a huge elk she’d taken. I don’t know the details but she said we could use her elk for the photo shoot. It was about then I heard Lee say; “where’s Gene? He’s got ‘The look.”

The photography team finished up “shooting” the antelope scenes and we headed for town. We met the people with the elk and headed west to “the spot.” During the ride they described what was going to take place. I’d be wearing a Badlands Ox frame pack with the giant elk strapped onto it. I’d also be wearing a pair of the new Brunton Icon binoculars and carrying a rifle wearing a new Brunton Eterna scope. The plan was then I’d wade out into the river for some photos. Simple right?

All decked out and ready for the photo shoot to begin I stepped into the river. The first thing I noticed was how slippery the rocks were. The bald spot on my left shin that moments ago still had skin covering it stung for only a few seconds. The cold water took care of that. “Wade on out there about waist deep” they said.

With shutters clicking and instruction being shouted “look this way, look that way, never look at the camera” I waded out further into the river. Now, standing waist deep in the icy cold water I followed the directions of the photographer’s best I could.

It’s surprising how fast the time went by. When we were nearly done Tom, one of the photographers decked out in waders and sitting in the water with his camera lens just above the water level asked me to “turn and walk toward me.” At that point I was nearly exhausted but hey, I was a model right?? I turned to walk toward Tom, doing my best to look this way and that way while not looking at the camera. I don’t remember now if it was my second or third step but it was then I realized what “the look” meant. Now, standing neck deep in the cold river I realized exactly what Lee meant. Not that I looked anything like a model it’s just that I “looked dumb enough” to wade into an icy cold torrent for some photos. Luckily Jim, Dani’s husband was close by and helped pull me back to “waist deep” water. We finished with the photos and I was once again back on solid ground.

I was wrapped in blankets and towels and ushered back to the Yukon to get out of my wet clothes. I first pulled off my boots and realized that no matter how waterproof and insulated your boots are, your feet will be wet and cold when you stand waist deep in icy water for somewhere near 45 minutes. Next I removed my pants and was quite shocked to see that what in my younger days had been considered a “vital organ” had been replaced by the tip of a very tiny purple mushroom! Did I mention just how COLD that water was? 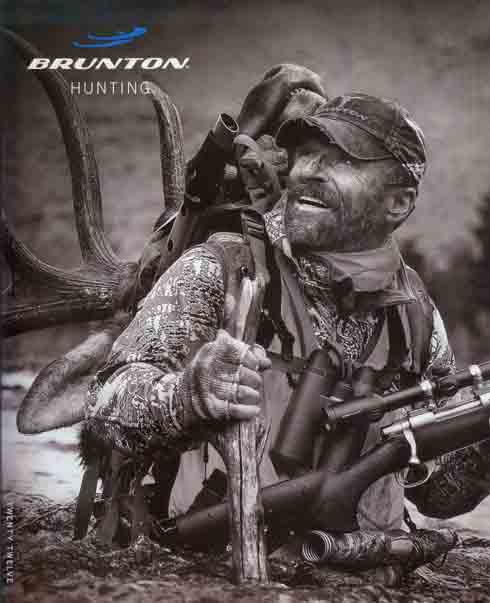 Anxiously I waited to see the resulting photos. Then came the shocker. Apparently Lee was right on both counts. I did have “the look.” The 2012 catalog arrived and there I was on the cover! It was an experience I won’t forget but I must say this; They couldn’t have paid me to do what I did if I didn’t truly believe in their quality products. Get a catalog and take a look. I’m sure you’ll find something you need and trust me … you won’t be sorry.

To get your ‘look’ go to: Brunton Hunting