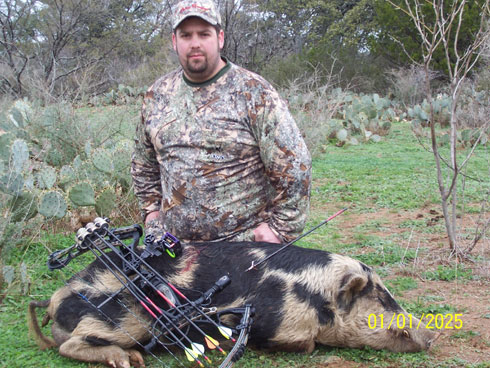 Watch Em Drop is exactly what Jared did with this hog.

Every  February there is a major migration of manufactures that travel to Fort Worth Texas for the NBS Show and the days following that show, a large number of Owners, Buyers, Reps, & Manufactures take some days off and take advantage of the great hunting for Hogs, Exotics and Whitetail deer.

This year I had made arrangements for the Bad Hombres at Grim Reaper to travel down and hunt with Zane Beckmann at Hugelland Safaris for hogs.  Now you have to understand I have a huge respect for all of the guys at Grim Reaper as they are very passionate about their products and the testing of Grim Reapers. I have had the privilege of hunting with The Big Kahuna  Jay Liechty, el Presidente of Grim Reaper for deer and hogs and let me tell you Jay is a passionate bowhunter.

I’m impressed with his love of the sport and the love of the meat he takes on a hunt.  He can glean more meat off an animal than a vulture but that’s part of why we hunt; the thrill, the challenge and the meat. That being said, we made arrangements with Jay and  the rest of his crew Matt Bateman, Regional Sales Manager, Brock Zobell, Manufacturing Engineer, Jace Johnson, Sales /Customer Service, Jared Demille, Machinist, Dan Medaris, Machinist, and Tyler Carter, Product Assistant to arrive on the Tuesday following the NBS Show.

On schedule, everyone arrived and was ready for a hog hunt. Jay brought a horse trailer loaded down with camping gear, a huge freezer full of food and ready to take home some Texas Pork.  We were hunting near Llano the Deer Capital of Texas and rightfully named.  There is more deer killed each and every year in Llano County than any other county. That being said, they also have a huge population of hogs and this area is prime habitat with rolling hills, plenty of water and mesquite with plenty of mass for the summer. The mesquite bean is a great source of food for deer, hogs and turkey during the summer months as its high in carbs and sugar. Oak, needless to say has huge mass crop of acorns (“Akerns” for most folks especially in the south) plus the feeders that all of the ranchers have running for there deer, turkey & hog hunters.

With all the natural, supplied and unintended food sources, game has plenty to eat and that has resulted in large numbers of wild hogs.  I know you have heard about the destruction hogs cause to the land and crops. It is unbelievable how they can tear up terrain, feeders, bird nest, and just play hell on the fawn population.  So we have to control the hogs in Texas.  The state projects over 2 million hogs in the state and after this year (2012) ends there will be another million added. That is how fast hogs breed. Everyone in our group was shooting bows or crossbows and everyone was anxious to get started putting down some hogs.

The first morning was cold with frost on the ground. The Wild Bunch got up, had something to drink, a quick sweet roll and to the stands they went.  Brock Zobell was sitting in his 6 foot tri pod and heard the pigs coming to the feeder squealing and grunting all the way. There were three 100 pound plus hogs in the group but Brock  did not wait for the pigs to settle down. If you’re a new pig hunter it’s essential to wait for the pigs to start feeding, then you can start drawing  your bow and get the shot you need.  The rest of the group either did not see pigs,  heard pigs squealing or had pigs at their feeders during the night.

After a great mid morning breakfast we all gathered to do some competitive shooting. All the Grim Reaper guys can flat shoot a bow and the camaraderie was fun to be around. I truly enjoyed each and every day we spent together.

RW, my left hand man came in and started filming the hunters and that was also a hoot! Some of these guys had never been around an outdoor show film crew and their response was one of those ‘Kodak Moments’. You can see them in an upcoming episode of Tex Mex Outdoors with Grim Reaper and the Grim Reaper Mathews Edition Broadhead.

By now everyone was getting comfortable with our set up and the style of hunting and it was on the second night that the excitement really started for Tyler Carter. Every night each hunter would go to a different feeder. The moon was full so the visibility was great.   Hogs will become nocturnal on full moons, feeding heavily during the hours of 8 PM thru 4 AM. Tyler had asked me to pick him up around 2:00 AM as he sat and waited on the hogs to come in. Around 11:30 PM we were all standing around the campfire,  trying to solve the worlds problems, decide on what was the best bow on earth and hoping the guys were getting into pigs when, we heard what we thought was a cougar scream. Either a cougar or a wild Peacock night yelling. Then Tyler called and he was yelling for me to come get him, right now, he wanted out, right now, and I mean you could tell he was meaning not later but ‘right now’.

So I saddled up and drove down to where he was sitting and his excitement level had not come down one note. “What the heck is going on?” I said. Well it seemed that scream we heard wasn’t a peacock. Tyler said he had a cougar walk right under his tri pod, stop and let out with a nerve rattling scream. I asked him why he didn’t shoot? (We had told everyone that all predators, including cougars were legal to take in Texas year round.) Tyler looked at me with that “You can’t be serious” look and said “I don’t think I could have drawn my bow.” It was unnerving enough when it just walked under his stand but when it screamed it was game over.   So we returned to the fire pit where we spent a lot of time talking and laughing about Tyler’s encounter with the big cat.

The week went quickly and the guys had a great time, Matt Bateman was sitting on a feeder and had lots of sign but the first two days he never saw a hog. On the third night around  8:00 he had a big sow  come in and  put a deadly Mathews Edition Grim Reaper through it. She ran about 70 yards and it was over, Matt stayed in the stand till around 1:00 AM hoping more pigs would come but nothing showed and he finally walked in to camp and called it quits for the night.

There were 7 bowhunters, 12 shots taken and 7 hogs taken.  There was plenty of great food from pit smoked pig, Dutch oven biscuits to go with sausage gravy and some of the best deserts. The perfect hunt with way too much good food and great friends in camp.  One of the nicest parts of the hunt was that Jay Liechty also brought his wife and three boys and we have some great footage of the hunt. So be sure and watch for this episode on The Sportsman Channel.

The next time you’re thinking about a hunt in the middle of winter and you would like some warm weather and great hunting. Contact Zane Beckmann at 830-456-7623 and come to the beautiful hill country in historical Fredericksburg, Texas. And if you like, be sure an bring the family.