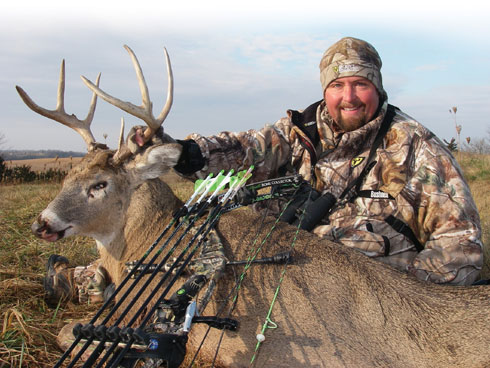 BOW HUNTING has plenty of what-ifs as is. That’s why you and I take on the archery challenge. But making your shot shouldn’t be a question mark. You can’t control what a whitetail will do, but you can control your gear and your practice approach, so you’re ready for a slam-dunk on the shot.

I look at my archery gear equation with a pro-con approach, weighing out the benefits against the costs of every factor of my setup. Nothing is all good or all bad, and there’s always give and take. But with time, work, patience and some practice, you can get your gear tuned and yourself shooting well. Confidence translates into shots made in the field. 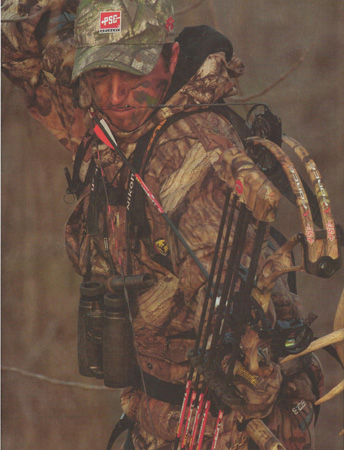 I call it “arrow dynamics.” Some of my approaches might surprise you. But here’s what T-Bone thinks about arrow weight and speed, energy, penetration and practice. I hope these ideas help you launch an arrow into the boiler room of the next buck you draw on.

ARROW WEIGHT:
GO FOR PENETRATION
Hunters overlook their arrows’ importance. Getting excellent penetration is key. Your arrow cannot be too stiff. However, too stiff is better than underspined. Spine is the arrow’s ability to absorb the bow’s energy. A stiffer arrow holds that energy and flies straight. An underspined arrow is a hard tiger to tame. You lose energy as it whips and wobbles. This takes away all that speed you wanted. Worse yet, it reduces penetration.

A light arrow is faster, but at the target (a deer), it loses kinetic energy. If a major league pitcher could throw either a ping-pong ball or a baseball at you at 100 mph, which one would you rather get hit by? After an arrow hits the animal, the energy in that lighter arrow is gone. But the heavy arrow smashes and slices through.

I like 6 grains of arrow weight per pound of bow weight. For example, my 70 pound bow is just right with a 420-grain arrow. This formula is a minimum. Pushing arrow weight up is better than down. How did Native Americans kill deer without bows that shot a fraction of today’s speeds? They had heavy arrows. Energy at the point of impact is what’s important.

There’s a fancy but important formula for kinetic energy of an arrow: fps2 x weight of arrow2/450240. It’s cool to know the numbers, but I like to measure penetration by how deep my arrow is in the dirt on the other side of the animal, or how far it’s lodged into a tree after passing through.

SPEED: SILENCE IS GOLDEN
I am a fanatic about a silent bow. Silence is more important than speed. I’d rather harness speed and improve arrow flight, which will increase the energy that an arrow delivers on impact. It’s hard to steer an arrow-with-broadhead flying over 280 feet per second (fps). I like my bow shooting about 270 to 280 fps, where it’s very accurate and quiet.

You need a light arrow to get 300-plus fps speeds. But lightness sacrifices spine, and your arrow whips. Any flaw in your shooting form is going to be greatly emphasized. For every five fps you gain in speed, you lose forgiveness. Worse yet, fast bows are loud.
Whether you’re shooting 240, 270 or 340 fps, your pin gap isn’t changing that much between 20 and 30 yards. Weighing out the pros and cons, an arrow thrown from a bow at 270 fps will fly just as flat as a 340 fps arrow over the first 20 to 30 yards. And as whitetail hunters, our bread and butter is close in. Did you know that the average distance P&Y bucks are shot is? 17.5 yards!

So why prepare so hard for low-percentage, long-range pokes? I compare it to smart basketball. You practice day-in and day-out for that close-range work in the lane — the stuff that really pays off. You don’t practice all year for the buzzer beater, which is that 30-plus yard shot.

One of the biggest benefits of a “slower” bow is silence. String oscillation and whip is the number one noise factor. You can’ beat the speed of sound, which is going to reach that deer before the arrow does, and then you know what happens. Whoosh! Silence — not speed — is the solution.

Adding string leeches or cat whiskers helps the silence factor. Cat whiskers also add weight, and they force the string on a straighter path, both of which help. I even put cat whiskers on my cables. Some guys laugh at that, but I’m only losing 4 fps when I do it, and I’d rather have less sound than more speed.

One more tip: Always aim a little lower on the animal when picking your gaps and placing your pin. If a deer is going to jump, it will be downward. So aim for the top of the heart. Then if he sprawls, you still have 8 inches or so of lung above where you were aiming. And if you miss low it’s usually clean. 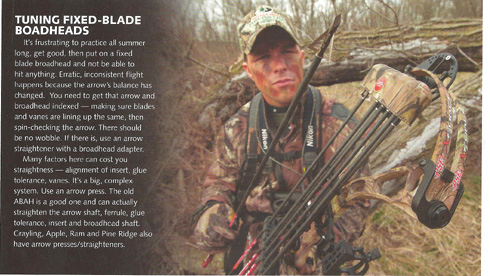 RESTS AND SIGHTS:
SIMPLE AND STRONG
When you think about your bow budget, the areas not to skimp are your rest and release. A good, solid rest that performs consistently is essential to good shooting. So is a smooth, trouble-free and consistent release.

Simpler is best here. I like a rest that has containment, so that the arrow won’t fall off. Drop-away rests are quiet too. They are great for the small-diameter carbon arrows many folks use these days.

You could tape on a toothpick for a sight. But getting something solid and reliable is smarter. Out West, or where longer range shots and stalking are the names of the game, an adjustable pin sight is good.

For most whitetail work, where action happens fast and is usually at close range, you don’t have time to fiddle with an adjustable pin. What was going to be a 7-yard shot might soon be a 26-yarder, or vice-versa. You need fixed pins. In some situations you might have 10 seconds to estimate your range, draw and make the shot.

Keep it simple with 20, 30 and 40 yard pins. You can gap shoot for mid-ranges between these distances. The 20-yard pin works form point blank out to that range.

Start at longer ranges and set those pins first – 40 if you want, then 30. Work your way up so you can get a true 20 yard pin setting. If you don’t start setting the longer pins first, your gap distance for 20 to 30 might be larger than the gap between 30 and 40.

PRACTICE: BE SMART:
I take these approaches to practicing for hunting.
One; I’m estimating ranges to things all the time. In most hunting situations, you don’t really know the yardage or might not have time to laser it. So it’s important to estimate. I do this constantly, then march it off and check. Plus, practice with your laser rangefinder so you get good — and quick — using it.

Two; I highly recommend shooting 3-D archery tournaments. There’s no better way to practice for hunting. But stay low-key. You’re there to practice and get better. I’ll just get together with friends and shoot 3-D once a week. A little friendly competition is okay — there’s definitely pressure to make the shot when you’re hunting.

Three; don’t pick up your bow two weeks before the season, practice like a madman, and expect to hit a deer. Instead, hang your bow on your back porch, by the back door or in your garage, and take five shots in the morning and five in the evening. Shoot a few arrows a lot, not a lot of arrows every once in awhile.

Four; avoid long, tedious and sometimes frustrating shooting sessions. Avoid trying to “get one last good group” before you quit. You’re better off coming back later with a better attitude. Practice should be positive, not punishing. One group in the 10-ring is better than 60 shots all over the target.

Five; shoot your bow exactly as it will be set up for hunting, right down to wearing your hunting clothes. Take off the quiver if that’s how you will hunt. If you hunt from a ground blind, practice from one. Shooting while kneeling or sitting is much different than standing. 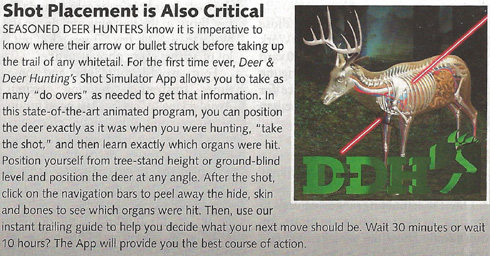 BROADHEADS:
One of the beauties of mechanical broadheads is that their trajectory won’t change from your field points. This is huge, as compared to the prospect of re-tuning and re-zeroing your bow as hunting season nears and you change to fixed-blade broadheads.

I need to be clear here — I like fixed-blade broadheads (this includes replaceable blade models), and use them in many situations. But rear-deploying mechanical broadheads are reliable as can be, and they give you the same arrow flight as your practice points.

Using a modern compound bow with a peak draw weight at 60 to 70 pounds, and a rear-deploying mechanical broadhead, you should be able to take most North American game. There’s enough kinetic energy there for excellent penetration.

But mechanical broadheads begin to lose effectiveness when used with traditional bows (which I love), and at lighter draw weights on compounds. Penetration is hindered. Just by the way I shoot and the draw weights I like, I use mechanicals most of the time these days. The exceptions are when I’m using a recurve bow or going for super-large game.

Here’s an example. I was bear hunting in Alberta. The outfitter was a rifle guy, and had concerns about bowhunting for bear. He preferred big guns. But I showed him a broadhead, and convinced him to let me try. I double-lunged a 300-pound black bear and it went 8 yards. The outfitter couldn’t believe it, but he believes now.

You need cutting surface. I could have put a water bottle trough the hole in that bear. You can’t kill anything too dead, or have too much blood come out too fast. That’s hunting. That’s our responsibility to the wonderful animals we hunt.

CONCLUSION:
If you want to be a better bow hunter, don’t make yourself crazy chasing arrow speed. Go for arrow energy, penetration and silence instead. These are the “arrow dynamics” I believe in, and they’ll help you get your buck too.

Reprinted with thanks from Whitetails Close Enough to Kill – FW Media