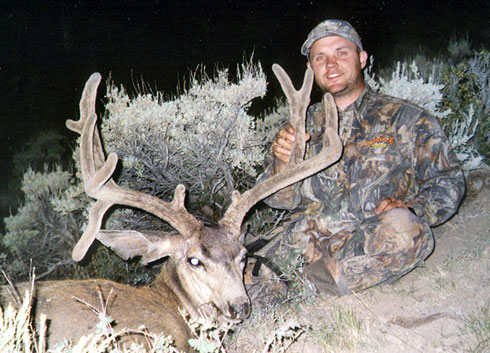 As I was sitting with an arrow nocked, waiting for a Columbian Whitetail deer to appear from the tangles of nearby Blackberry thickets, many of my past deer hunts began racing through my mind as well as a mental check list. Was the wind going to hold true all evening? Did I do enough homework to know what trail the buck would use? Did I make it to my spot without being detected by anything? If an opportunity presents itself, am I ready to make it count? A person has to keep their mind occupied with questions of this nature so the smallest of details are never overlooked. As we all know, the stars have to align a little for everything to come together in those few precious moments leading up to a shot.

In 2011, I made due on the largest goal I personally have set as a bowhunter. My goal was to take one of each of the six species of deer in North America. I understand some would argue there are x amount of whitetail sub-species out there. However, for my goal I’m talking Mule Deer, Blacktail Deer, Sitka Blacktail Deer, Whitetail Deer, Coues Whitetail and Columbian Whitetail Deer. Five of these species are recognized by Pope & Young. Columbian Whitetails are not recognized at this point. This was a goal I felt I could accomplish without breaking the bank. I knew if I hunted hard and exhausted all of my resources I could do each of these hunts with friends or people I have met within the hunting community that may have some access to these different species of deer.

You see, like many of you, there just isn’t a lot of money to throw around at the end of every month. My love of hunting isn’t going to hinge on how much money I have either! I have two children, wife, mortgage, vehicle payments, student loans, daycare and the list goes on and on. Fact is, I had to get creative on how I was going to accomplish this goal. Whether it be trading, researching or simply drawing a tag, I was up for any of them. Here is how some of the hunts went down!

Mule Deer:
I was fortunate enough to meet a great friend when I was in my early twenties who introduced me to the thought of hunting out of state. Kevin talked me into applying for a tag in Nevada with him right after I graduated from college. Since that day, I have been lucky enough to draw several tags over the years and been able to kill some very nice bucks. The only costs for these hunts were simply the out of state fee’s and the travel to get there and back. Lot’s of research and the mindset that we will go until we find deer was all we needed!

Blacktail Deer:
Fortunately for me, growing up on the Oregon Coast has allowed me to hunt Blacktail deer my entire life. This species is easily my favorite animal to hunt and in my opinion, the most difficult of all the deer species to kill a mature one of. Blacktail tags can be bought over the counter in Oregon, Washington and California. I have hunted in both California and Oregon but never made my way to Washington. For a non-resident, an Oregon Blacktail tag is going to cost you about $450.00.

Sitka Blacktail Deer:
This was probably the most costly of all the species for me because I had to get up to Alaska where I was allowed to buy a couple tags. One of the teachers where I work guides fishing trips out of Sitka. I talked him into just dropping me off on the beach and coming back to retrieve me once I had killed a couple of bucks. This was a very physically demanding hunt but was well worth it. I ended up killing two very nice deer and packed them back down to the beach where I simply had to lay around and wait for my buddy to get a break in his schedule and come pick me up. I don’t know how much I saved by enlisting his help, but I’m sure it was a bunch!

Eastern Whitetail Deer:
I started picking up a few points in Kansas to make sure I could take advantage of any opportunities that came my way. A couple years later I met a gentleman that wanted to hunt Blacktail deer and I made a friendly trade with him to swap a trip. Worked out great and I was able to arrow this buck on the 7th day of that hunt. I really enjoyed hunting these vocal deer. I had never in my life been exposed to some of the vocalizations I heard and really had a great hunt. Again, this hunt cost me airfare and the NR license and tag fees.

Coues Whitetail Deer:
I’ve been very lucky to meet some great individuals and families because of hunting. I made a trip to Arizona to hunt with a great friend, Matt Schimberg. Matt happens to own a guiding outfit, Arizona Strip Bucks and was kind enough to show me the ropes for Coues deer. Matt and I began glassing the first morning of the hunt and spotted a buck he thought I should put a sneak on. The rest of the hunt is history. I got very lucky and was able to put my tag on the first Coues deer that I had ever stalked. I could see how this hunt could be one of the most difficult spot and stalk hunts out there. In the end, it’s just putting the right piece in the right place at the right time. Again, this hunt cost me airfare and the NR license and tag fees.

Columbian Whitetail Deer:
As an Oregon resident, we have a couple seasons set up to hunt these Columbian Whitetail deer. I happen to have a bunch of deer points in Oregon and really did not want to burn them on this hunt. I started applying for the early archery tag as a second choice so I could retain my points every year and hoped to get lucky on the draw. Also, I really wanted to have a bull elk on the ground prior to spending much of September trying to kill one of these little bucks. In the end it worked out great. I drew a second chance tag and killed a bull early in elk season. This gave me the time I needed to invest in finishing my deer goal and this would be the year. Because this unit is almost all private property I knew I was going to have to find someone to let me on. I made a bunch of phone calls to different people I know and landed a spot to check out. Wasn’t all that much later and I was sitting over this buck with my goal accomplished! I guess its time to raise the bar and set some new goals.

The main thing here is that you can save a lot of time and money by knowing people in other states and making a tight budget work. I am grateful for all the contacts I’ve made over the years who all helped me live my goal. You can too.