At Plum Creek – Fred Bear Showed Me How 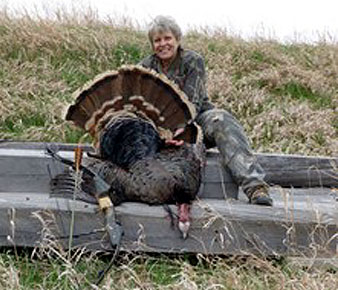 Author with her Turkey

In 1978 Dick was making plans, designing a cabin to build on Plum Creek. Fred Bear had hunted there with Dick and had a few suggestions for the project. Fred sent this book to Dick with this inscription on the inside cover.

The inscription – “To Dick Mauch – Rushed out to get this so that we can have a first class bunk house. I don’t go for this roughing it and hope you can locate the affair between close up trails of big deer coming to the canyon at daybreak. Need large windows facing the trails and high ceilings for bow clearance. Fred Bear 1978 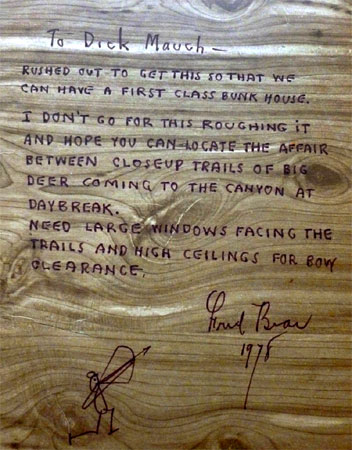 Dick’s design was to 1/4” scale on his Trestle board, the cabin was erected from Colorado Spruce Logs Fall of 1981. Fred, Dick Lattimer and Glenn St.Charles were first guest turkey bowhunters in May of 1982. Fred hung a dinner bell, shot an arrow into the gable end and said the order was fulfilled.

It was a windy day and I knew the turkeys would be roaming the bottoms. I opened the window on the front porch and yelped with an old Ben Lee Twin hen turkey call.

The old tom and a jake strutted down the road, right in front of the open gate. Giving me a clear path to let my arrow fly and scoring a successful hit with my old Bill Stewart custom compound using aluminum arrows with a Bear Razorhead.

Enter to WIN with ThermaCELL!