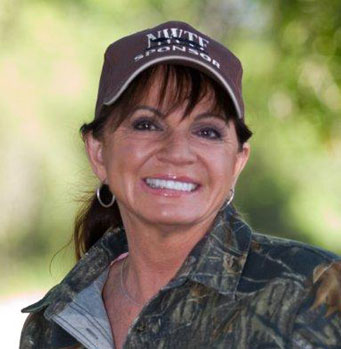 Bethel University is pleased to announce they have selected Brenda Valentine “First Lady of Hunting®” as the new head coach of the school’s archery program. As head coach, Brenda’s duties will include recruiting and organizing a competitive archery team to represent the Bethel Wildcats in intercollegiate and club competition.

Brenda, a Tennessee native, is a pillar of the archery and hunting world, with a long list of competitive shooting titles in addition to her enviable collection of bowhunting trophies.  She is a member of the National Legends of the Outdoors Hall of Fame, the Henry County, Tennessee Sports Hall of Fame, Tennessee Turkey Hunters Hall of Fame and is a current inductee of the National Archery Hall of Fame. She is most proud, however, of the credit she is given for introducing more women and children to hunting and the outdoors than any person in modern history. Her new position will allow Brenda to further this passion with the next generation and continue building an outdoor heritage.

A popular outdoor writer, Brenda is also a member of the Bass Pro Shop’s, National RedHead Pro Hunting Team and a co-host of Bass Pro’s hunting TV program for 16 years.  She is a National Spokesperson of the National Wild Turkey Federation and host of the Turkey Call TV show.  Additionally, Brenda is among the 2012 inaugural group selected for the “Legends of the Outdoors” SW Asia tour by Armed Forces Entertainment.

Commenting on her selection as head coach, Brenda stated, “Archery is a sport equally suited for male or female athletes. This is one activity where a person’s size, speed, or athletic ability is not a major factor for success.  I look forward to being a part of a program that enables students to gain a higher education while also participating in a sport they can enjoy the rest of their lives. The National Archery in Schools Program has introduced countless thousands of kids to archery over the last several years and now we are moving them to the next level of competition.”

Bethel University, founded in 1842 and recognized as one of the fastest growing universities in the south, is a four-year liberal arts university offering a broad range of undergraduate and graduate level educational opportunities through its multiple campuses. Founded in the tradition of the Cumberland Presbyterian denomination, Bethel’s mission is “to create opportunities for members of the learning community to develop to their highest potential as whole persons – intellectually, spiritually, socially and physically – in a Christian environment”.  The Bethel University Wildcats compete in the National Association of Intercollegiate Athletics conference.