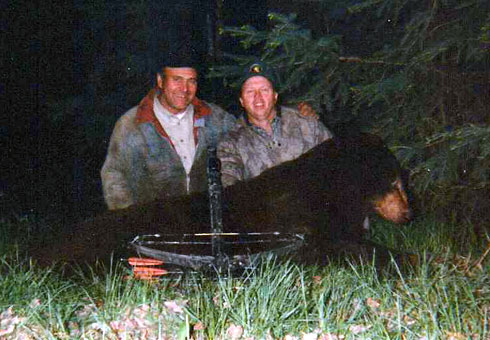 Author with his spring bear.

Knowing that there is not much going on in the spring, when I saw a notice in the North American Bowhunter Club’s news letter for a spring bear hunt I jumped at the chance. I called my good friend and club president Dan Hendricks and told him to sign me up,

The thought of getting back into the woods with a bow in my hands and reliving last years hunt made this an exciting proposition. Dan laid out the details of the hunt; I was going to be one of four hunters. Dan and his film crew were going to be filming each hunt for a Rocket Broadhead Video. This added another measurement of excitement as now I was going to a hunting celebrity; well not really.

Our hunt was going to be in Swan Plain, Saskatchewan with Bernard Nokinsky of Timberline Outfitters in mid May. Dan and his crew were going to leave early to set things up while us four hunters would later make the 14 hour trip to Swan Plain.

I practiced for two weeks with my crossbow and finally the day came to pack up and leave. Meeting the other hunters Kevin, Tony and Josh at my house, we loaded our gear in the pickup, said our good-byes and pointed the truck north.

After traveling down a long gravel road we finally came to our destination. It was a typical North Canada farmyard setting with older buildings, farm animals, old abandon vehicles and farm equipment. When we pulled up, the owner and his son Harvey were there to greet us. They had good news that most of the baits were being hit everyday and we all should look forward to a good week of hunting. We unloaded our gear and moved right in.

After getting situated we all got our bows out for some last minute practice before heading out to the stands that afternoon. After much anticipation we were ready to head out. With my guide, Harvey and Dan we drove 10 miles to our jumping off spot. We unloaded the four -wheelers and went in one at a time, three miles through thick brush, across two creeks and lots of mud to finally the bait site.

When we arrived, Dan went to work on setting up scent dispensers and fire sticks. We re-baited and climbed into the stand at three o’clock. Our stand was approximately 20 feet high and 25 yards from the bait, so with some luck, my shot was going to be close.

About three hours into the wait, movement out front snapped me to attention. Peering through the underbrush, I could make out two dark shadows circling to our left. As if from nowhere, a beautiful cinnamon bear came walking on down past our bait site. Having checked out the scent dispenser and knocking it to the ground, he then went to check out the fire sticks. Realizing this was not food, he went to the bait and sat down to enjoy some oats from a hole in the barrel. Not long after, a coal black bear joined in at the bait. Both bears appeared to be about two years and weighing around 100 pounds each. Since we were after something bigger, we were content to just watch them feed.

About 10 minutes later Dan motioned that another bear was coming in. Just at first glance I could tell that this was a bear I came to Canada for. Picking up my crossbow, I tried to lean as far forward as I could, but being disabled, I could not stand to get the shot because of the rail around the stand. The bear, a beautiful chocolate phase was getting closer. The bear started smacking its jaws trying to get the two smaller bears off the bait, but they just kept on feeding.

The chocolate bear kept circling for 20 minutes when all at once the two bears on the bait walked away. As Dan and I were discussing our next move, we noticed the same two bears coming back to the bait. They were growling and started working at getting the barrel loose from the tree so they could tip it over. After that was accomplished, they started digging into the oats. The black bear managed to get wrapped up in the wire that was holding the barrel. It was quite a show watching him try to get loose with the other bear just content to watch the antics.

We notice the bigger bear had started circling around our stand again. I could see foam all over its mouth from smacking its jaws so much. The bear came in and was going for the bait as I got my crossbow up and got ready for the shot. Following it in my sights, the bear paused for a moment, giving me time to make the shot. I sent the Rocket tipped arrow on its way. My shot found its mark. The bear spun around and then took off into the brush with the other two bears scattering. I gave Dan the thumbs up sign and he slapped me on the back.

Dan had been filming the entire episode for the last 45 minutes. He rewound the tape and replayed the shot. It looked like a good hit, but hearing no death moan, Dan decided to go get some help. Five minutes after he left the two other bears came back to the bait. I picked up the camera and filmed them for a half an hour until I heard the four-wheelers coming. The bears did not leave until Dan and Bernard were at the site.

After a short tracking job, they found the bear about 100 yards from the stand. They loaded it on the trailer then came back to get me. The ride out proved to be more exciting than the ride in, with the bear loaded on the trailer slowing our progress through the mud.

Back at camp we took many pictures and had the bear weighed. At 210 pounds this was not bad for a spring bear. We skinned it out and packed up the meat for the long ride home. I decided to keep the head and hide for a mount which now hangs in my living room.

The best part is that I have a video so I can replay my bear hunt anytime I want. Timberline Outfitters were great hosts and Dan and his crew did a great job with the video. This was truly one of the best hunts I have ever been on.