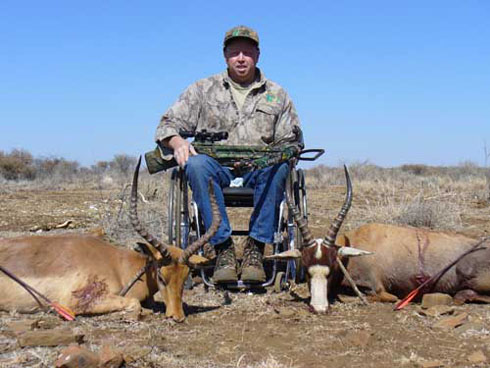 Doug grew up in Corcoran, Minnesota, which is a small town near Minneapolis. Two years ago he moved to his dream house in Princeton, MN. His new home is completely wheelchair accessible and is located on 20 acres in the heart of Minnesota’s best deer country.

Doug started bowhunting in the early eighties with a compound bow as a way to extend his hunting season. He has since started using a crossbow, which he enjoys very much. “The crossbow opens up a lot more shot opportunities for me given my mobility limitations which makes bowhunting even more exciting!” Doug has been on the PCBA Wyoming antelope hunt where he harvested a beautiful 13” buck within the first couple of hours of getting in his blind! He has been very fortunate over the years to be able to travel to many exciting places to bowhunt. Some of his stand out favorite hunts have been to Florida for alligators and to Africa for a variety of game. Doug has been on safari to Africa twice and has harvested six trophies!

After initially getting involved in bowhunting, Doug got much more involved with archery and more specifically with people with physical challenges who wanted to get involved in the sport. Doug held a position with the Archery Trade Association (ATA) as the Disabled Shooting Coordinator until 2010. Currently he is on the board for Minnesota’s state bowhunting organization and is President of the Turn in Poachers program. Doug is also a writer for bowhunting.net where he has his own column, The Disabled Archer.

Doug feels strongly that there is a need for people with disabilities to be represented in the bowhunting community. He has been and continues to be very involved. He is excited about his position as PCBA State Representative so he can help the current members in his state and also recruit new members to get involved with the PCBA.