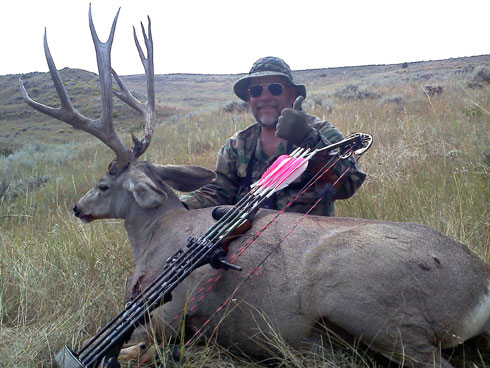 Author with his trophy buck. Wiser for the experience of spot and stalk.

Each step I took was calculated and deliberate coupled with the anticipation only a stalk on a P&Y mule deer will bring any archer. The Wyoming terrain outside of Sheridan was a perfect stage for spot & stalk bow hunting high desert mule deer. I was wearing my new HECS STEALTHSCREEN so I felt pretty comfortable trying to get close to this bedded buck. As I performed the spot & stalk shuffle I could not believe that the closer I got to the bedded buck the faster my pulse was racing inside of my head. As I came to the cut I believed was the last one before I reached where my trophy was bedded, I took a quick look with my binoculars to see if I could see the tops of his 4 X 3 frame. Scanning the terrain turned out to reveal nothing but the sage brush on the rim of the next cut. No rack, no buck.

Ok, time to make my move over to this next cut. One quick step and as I looked into the cut I was trying to get around to the one my buck was in, and ‘Panic’. There he was looking at me at five yards. He was, not in the next cut but this one. I am not sure who was more surprised, me or this old buck. The speed of his exit along with his high racked 4×4 partner reminded me of my rabbit hunting days back in Indiana. I was amazed by how fast he came out of his bed. And even though I had drawn my bow he had used the only vegetation and the dirt bank of the cut to shield his escape.

Once I realized I would have no shot I took a quick seat behind a large sage brush without looking where I was sitting and adding insult to injury, I was now the proud owner of a backside full of cactus.

One stalk, three lessons learned. Lesson one, once you locate the animal you wish to stalk, pay attention to multiple landmarks around that animal. Had I done this I would have realized I was five yards from my trophy. Lesson two, slow down and be prepared to intercept animals you might not have seen prior to your stalk. Lesson three, while stalking mule deer in Wyoming or any place else where there are rattlesnakes & cactus, look before you leap or take a seat.

This hunt took place during the early part of September. The temps at night were close to the freezing mark but the days were high sunshine, eighty degrees and windy. Our group was made up of archers of varying degrees of experience when it came to hunting mule deer this way. Me being the least experienced I told myself I needed to be like a sea sponge and soak up all the knowledge I could from these more experienced and accomplished mule deer archers.

According to them this weather pattern was perfect for our spot and stalk hunt. The hunt plan was quite simple; we would disperse each morning to different observation points within the boundaries of the ranch and with the use of quality optics locate and observe the bucks as they fed their way back to their first bed of the day. Now notice I said their first bed of the day. I found out the hard way that mule deer very seldom stay in this first bed for any real length of time.

On a prior DIY mule deer hunt I made a perfect stalk in on a big 5X5 typical only to find him no longer in his first bed when I got there. In this part of Wyoming shade is sparse due to the lack of trees and tall vegetation. So the deer will relocate to keep in shaded areas throughout the day as the sun travels east to west. This tactic of waiting them out until they move to their second bed was one of the tactics I learned from my hunting partners.

Once we had an acceptable buck located we then needed to determine if the wind and terrain was acceptable for a stalk to be successful. It is better to be patient and not push a stalk on a buck or group of bucks that are in a borderline or questionable spot. Remember they will get up and move some time during the day to another spot that will possibly give you a better advantage.

I remember that first morning trying to find the big 3X4 in my binoculars that everyone else was looking at and I just could not seem to locate him. I live east of the big river and very seldom do I need to focus on anything out past a few hundred yards. It took a couple of days for my eyes to recalculate and focus to the vast and endless horizons of mule deer country. This was where quality optics plays a major reason for success on this hunt. If you could not locate the bucks before they went to bed for the day you were not going to be able to stalk them, let alone harvest one. When it came to glassing technique, the areas that we concentrated on were the shaded sides of brush, rocks and cut banks. It was amazing how a move of just a few hundred yards gave us a completely new view of the same area. These short moves consistently produced just the right angles to reveal the bucks we were after.

So with quality optics, a pack full of patients and positions from the right observation points we glassed, glassed and glassed some more. We were able to locate the deer during one of their short moves for better shade or by the proverbial tine shining in the sun or the twitch of an ear or tail. Another bit of sage advice is to make sure during any travel in mule deer country that you do not skyline yourself to the deer. The big ones will not tolerate this rookie mistake.

With each stalk I performed or observed I became less of a rookie at this age old way to hunt. I believe this type of hunt is one of the most challenging and yet rewarding as it will test all aspects of an archer’s abilities. It does not matter what type of archery equipment you choose. It only matters that you are proficient with your bow and know your effective range. Your physical ability will directly impact you’re abilities to stalk quietly, remain motionless for long periods and to maintain the mental toughness to be able to hang in there for one more stalk.

And one more stalk (number twelve) was just what I was looking for. I had just helped one of my partners in camp with a buck he had harvested on the morning hunt. It was actually the wide and deep forked 3×4 buck I described in the beginning of this article. We had loaded the buck up in the ATV and with little room left for a ride back to camp I decided to hunt out the rest of the drainage we were in.

The sun was high with a steady wind in my face along with the thermals rising up the side hills of the drainage. I remembered this country from previous days glassing of just how the land was broken up with multiple cuts and depressions branching off the main drainage itself. With slow and deliberate movements I would move a few steps and stop by any cover I could find for concealment. I would glass the shaded areas in front and to the sides of me.

I had only traveled about four hundred yards when I noticed a large set of antlers sticking up above a cut bank about twenty yards in front of me. At this point I needed to select one of the two techniques I had learned this week to employ on a bedded buck that was within bow range. Wait for the buck to stand up on his own or pick up a stone and toss it in hopes he would stand up slowly and not blowout like many other bucks had already done to me so far during this hunt. I noticed during my wait that the buck’s rack was positioned in a way that I could tell which way he was facing. I decided to slowly move forward to see if I could get ten yards closer to the buck to be able to see his vitals.

Inch by inch I moved forward. This is the moment all archers live for and I was in full predator mode. At about ten yards I noticed his rack swing in my direction. As I came to full draw he stood up looked at me and began his best bail off of the cut bank but my arrow was already on the mark. I nocked another arrow as I stepped to the cuts edge but the first arrow was effective. I carefully looked over the ground at my feet and took a seat on a large rock, raised my right index finger to my maker and thanked him for this magnificent animal along with all the other blessings he had allowed me to enjoy during this hunt.

As you can see from the pictures we were four for four on this hunt. But be rest assured, the blown stalks will remain as vivid in our memories as the harvests themselves. All etched in the memory banks to be told around the campfires on future spot and stalk hunts for the magnificent mule deer of the West.