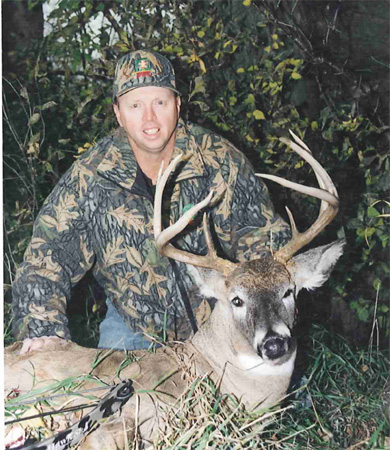 Author with a nice trophy buck after a few more years of bowhunting.

As you go through life you will encounter many firsts. The first day of school, your first car, your first kiss and your first child. But if you are a die hard bow hunter the one first that you will always remember is your first deer. No matter if was a buck or doe or if it was a old or young deer it will always be the biggest trophy in the woods. It is at this point where you change from being a spectator to a hunter. I remember my first deer with a bow like it was yesterday.

After hunting for about eight years and going through all the trials and errors of botched attempts and missed shots, I finally had my trophy on the ground. It was not the biggest deer in the woods, in fact it was even on the small side. I was proud of that little button buck that laid at my feet. I was now a bow hunting killing machine. I think it took three days before the silly grin came off my face. The events leading up to the planning, the shot and the recovery will always be remembered.

Here is my story

My cousin Todd and I had been bow hunting in north central Minnesota and were contemplating on where to go for the evening hunt. As we talked we thought maybe we should do some scouting first. So we got into the pickup and started down some gravel roads to check out some fields to see if any deer were out feeding. After about an hour we came to a cut alfalfa field that had seven deer feeding on the lush vegetation. We looked at the deer with binoculars and could tell it was a group of does and fawns. As we studied the herd and the terrain we developed a plan on how to get in range for a shot.

The deer were in the middle of an eighty acre field next to the edge of a large woods. The plan was to drive to the south end where I would get out and sneak along the trees to the field corner. Todd would go to the north end and walk toward the deer and hopefully drive them past me.

As I made my way to the corner I spotted an abandon piece of farm equipment. This will make a great spot to sit I thought and hide waiting for the oncoming deer. It took about an hour but slowly the deer started moving in my direction. As I sat there with my bow ready I tried to pick out the one I wanted to shoot. All of a sudden here they came; they must have gotten spooked by Todd’s approach.

They were coming single file but at a very fast walk. With no time to react I picked out the closest one, lowered my bow and sent the Wasp broadhead on its way. It looked like a good hit, maybe a little far back but if I didn’t hit the lungs it was definitely a liver hit. I sat there in disbelief, contemplating what had just happened.

Then Todd walked up and asked me what happened. The words rushed out of my mouth in a steady torrent of exclamations. When I finally got it out and calmed down enough to assess the situation, we headed out to follow the blood trail. The deer had run around the corner and into the woods so that was the direction we went to pick up the trail. Even with me being color blind we picked up the trail and after a short search, found my trophy.

This all happened many years ago and early in my bow hunting career. As I look back and with much more bow hunting experience, I can see that my only goal was just to kill a deer no matter if it was a buck or doe. To this day I am amazed at how I pulled this off. The one thing I know I did terribly wrong was to shoot at a moving deer. Though I was not new to shooting this was not the best shot under any circumstance and one I would not take today. This is the learning process and having a solid foundation as to what one’s capabilities are. I made the shot but experience has taught me to be more careful. We owe that to ourselves and the game we hunt. In the end it all worked out and from that moment on I went from being a hunting spectator to a true blue, hardcore bow hunter.