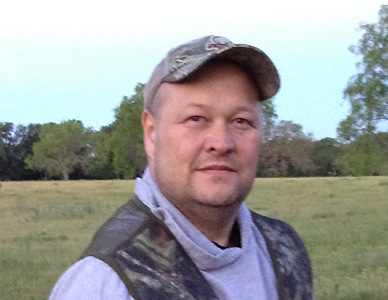 Timm Getts arrived a couple of hours before dark and I took him down to the guest trailor on my deer lease and he unloaded his stuff. It was too late to hunt so we drove into town and ate steak dinners at Junction 36 in Gatesville.

Before daylight the next morning we got ready and went to the area along the fence line where Fred Lutger and I had hunted. After daylight we heard (faintly) a vehicle on the road where I parked my pickup. Probably the mail man, I thought. Three hours later we had not seen or heard any wild turkey activity in our area and we walked back to the truck.

When we got to the kaleche road (as in non paved) it was full of horseshoe tracks. This morning cowboys moved cows around on our side of the ranch — the reason we had not seen any turkeys around.

That afternoon we went to the river and hunted across from a roost area. I already had a blind set up at the edge of some cedars that overlook a 15 yard semi open area. During the wait we heard several distant gobbles. When the shadows were long I called on a gobble that sounded about 400 yards away.

The gobbler fired back and we went back and forth as he got closer. He came up behind the blind and boomed out two gobbles. Instead of walking past the blind, which would have let him see the decoys, he circled through the cedars and came out 30 yards away. But he still couldn’t see the decoys.

He kept booming out gobbles and walked 20 yards to a nearby high spot and when he saw the decoys he strutted. He advanced a short distance and then decideed to roost for the night and flew up towards the trees on the opposite side of the river. He continued gobbling from his limb. Very exciting.

We snuck out at low light. My step daughter Breanna cooked everyone steaks. A short nights sleep followed and we returned to the river and we heard gobbles right away.

The 'Nock' - Don't Overlook Them