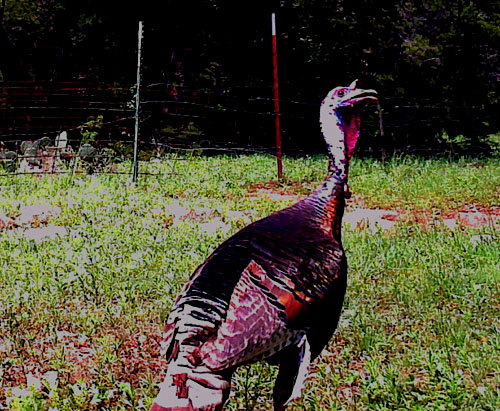 This morning it was kinda sleepy. But, you can’t hunt them looking at a pillow. Brewed some coffee, cooked a pop tart and nuked some oatmeal with raisins. I went to the same place where I was yesterday.

My SpyPoint game camera shows that the earliest gobblers have been after 8:30 but usually they aren’t there until 9:30. It also shows that some days there are none. Anyway, I slept another hour and was in the blind at 8:00 with my eye out for a Rio Grande gobbler looking for some hen action.

This morning I am not gonna call. The SpyPoint camera shows them walking through here almost every day. Right now the camera is 15 yards from my blind so if they get their picture taken today they might get to be my dinner guest too.

A few gobbles sounded off from different directions, all of them had one thing in common, they were too far away. Ten O’clock came and went.

Oh boy!!! A gobble ,,, close. And another. It is really tempting to call. But I want to work my plan and see if they will come through here again. Ok, another gobble followed.

I saw him on the left but couldn’t see him good enough to tell any more than he had a red head. Then gobbler walked up where I could see him, he was very casual about it all. I already had my bow in one hand and my iPhone in camera mode in the other. He was in my shooting window in seconds — less than 10 yards from me. 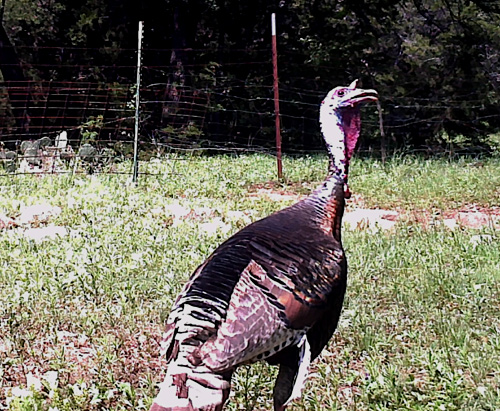 He was a nice Jake and I shot him with my iPhone camera. He continued walking and was gone in short order.

This afternoon a gobbler walked up without a sound. I noticed him through the small viewing window on the right side of the blind. I got his picture the best I could.

When he changed angles a little I saw he had a nice long beard. I set the camera down and got my bow. 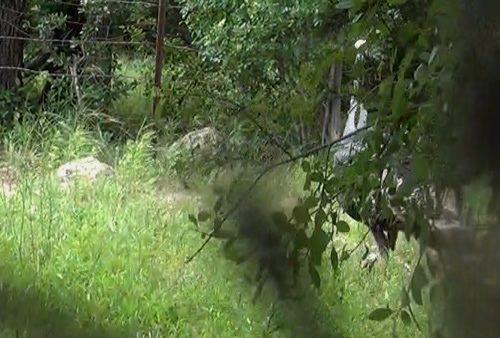 He stopped and I got a picture of him 10 yards away standing behind some low limbs. He left through a game trail hole in the fence too far to the right for me to get a shot.

Later on I heard gobbles as gobblers made their way to the river and their roosts. As I said before, tomorrow is another day…