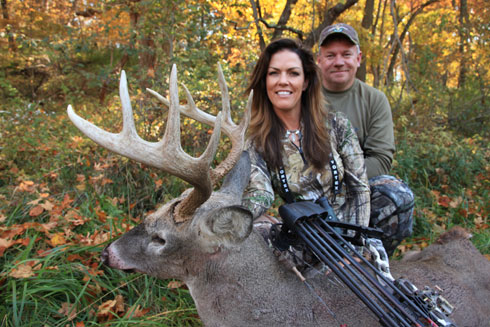 Jana and her guide Tim Yates take a moment to enjoy the shade and the harvest.

There are times when beautiful weather is a blessing… football games, outdoor weddings, parades and picnics. But when it comes to bowhunting the Midwest a rising thermometer can make it challenging when looking for big whitetails. Mature bucks tend to stay bedded down during a hot day, becoming virtually nocturnal until the rut hits. With the week’s forecast predicting mid 80’s, we knew our week in Illinois would seem more like August then early October.

I met Phil Lawrence, one of the owners at Cornbelt Whitetail Outfitters, while attending the National Wild Turkey Federation convention in Nashville in February 2011.

After sharing hunting stories, Phil encouraged me to make room on my calendar for an archery whitetail hunt for this coming Fall to experience the famed “Golden Triangle”, one of North America’s premiere destinations for big whitetail bucks. Their properties encompass the famous Pike, Adams, Brown and Schuyler Counties of Illinois. A twist of my arm was not necessary as arrangements were made for the long road trip ahead.

After 23 hours on the road from the mountains of Montana, we pulled into the main lodge at CWO. From granite countertops and Italian-tiled bathrooms to beautiful log beds and antler chandeliers, the accommodations were those of a five star resort. It only got better when we walked into the game room to view the numerous topographical maps marked with over 350 different treestands locations. With thousands of acres of rich food plots, thick hardwoods and surrounding corn fields, I knew I was in whitetail heaven. Strategically growing and hunting monster whitetails is their passion at CWO and after talking with guides Tim Yates and Scott McLemore, I could see why their trail cam photos captured some of the largest free ranging whitetails I’ve ever seen.

Along with the delight of spending a week in a treestand, I was thrilled at the opportunity to spend a week with my friend Jason Koger who would be joining us for the hunt. Jason lost both his hands in an electrical accident three years prior, but that didn’t detour him from pursuing his passion for hunting. Whether he’s chasing turkeys with a shotgun or targeting whitetails with his crossbow, Jason is the epitome of a true outdoorsman and his positive attitude is contagious. We were both excited to have the opportunity to bowhunt for five days and then spend the weekend with 17 kids who would be enjoying the Illinois youth hunt at CWO.

Leaving the hot hands and thick socks packed away, we headed out in our lightweight gear for our first morning in the trees. As the sunlight began to light up the woods, we heard the wonderful sound of acorns crunching beneath hooves. A small yearling made her way up from the gully and crossing beneath our treestands perched on a ridge. I was accompanied by my cameraman and partner Jim Kinsey, Producer of my new hunting show Skull Bound’.

Strategically placed at a corridor where the deer travel to a thick food plot, I felt we were in the perfect set up to see some deer if the morning air would stay cool. Shortly after, a doe with two fawns walked up the hillside making their way to the field just as I noticed two small six points milling in the beans.

For a hot, early October morning I was thrilled to see such movement. With the sun rising and the temperature climbing, the deer movement ceased so we headed back to the lodge in the stealthy Polaris four-wheeler to grab some lunch.

The heat proved to be a hindrance that evening as our sit only yielded one small forked horn buck. They call this time of year the “October doldrums” in my home state of Wisconsin, especially when a heat wave makes it feel like you should be at the beach instead of the woods. Any hour in the stand proves valuable though, whether it’s peace and quiet or a lesson in patience. Jason was also experiencing a lack of buck movement during his sits but despite the unseasonably warm temps and lull in big deer action it was hard not to have an awesome time with Jason in camp. His positive attitude and hilarious sense of humor made the CWO guides wish all of their clients were like Jason.

The following morning was quiet and warm. Despite the lack of deer movement, we enjoyed the beautiful sunrise and smell of changing leaves. Our luck changed that evening when, just 20 minutes before sunset, my camerman Jim Kinsey whispered,“Buck coming down the trail”. Steadying my feet on the 22 foot high platform, I grabbed my Strother Vanquish and prepared to draw. As he made his way through the woods my heart began to pound as it does with every archery hunt.

While the buck was sniffing the path I drew back and held until he presented a shot at 25 yards. My Shuttle T broadhead made a resounding SMACK but instead of running full speed ahead, the ten pointer dropped in his tracks! In 20 years of bowhunting, I’ve only once witnessed a deer instantly dropping which happened to be my first doe bow kill. And to have it all captured on video made it all the more exciting. Replaying the footage from the SonyEX3, we watched as the keen buck jumped my string!

We gave the buck a few minutes as we carefully untied our harnesses and lowered our gear and camera equipment. There’s no better feeling than getting to wrap your hands around the horns of any archery harvest and although he wasn’t as big as many of the B&C bucks they have running around the woods at Cornbelt Whitetail Outfitters, I couldn’t have been more excited. As the four-wheeler headlights shined on my smiling face, my guide Tim could tell it was a successful evening in the stand. The first words from Tim’s mouth were, “Look at that body! He’s huge!” Despite his lack of tall brow tines and wide spread, the buck was a mature 3.5 year old, weighing approximately 250 pounds, a great management whitetail.

With my deer in the cooler, Cameraman Jimmy spent the remainder 3 days in the stand with Jason. The weather continued to be a hindrance and their search for a big Illinois bruiser within bow range proved to be a challenge. The youth weekend however was a huge success as 17 young men and women, along with their parents, shared in the camaraderie and excitement that only hunting can provide. The woods were bustling with more hunters on stand and three beautiful Illinois bucks were harvested during the CWO youth hunt. With our hunting traditions resting on the shoulders of our youth, it was so exciting to see the next generation enjoying this country’s amazing hunting heritage.

Tune in to SKULL BOUND TV on Saturday, April 28 @ 11:00am EST or Sunday, April29th @ 9:30pm and watch this whitetail episode only on The Sportsman Channel. For more also go to: Skull Bound TV on the web and Jana’s site: Painted Skulls.

At Plum Creek - Fred Bear Showed Me How