The Day I Wet My Pants 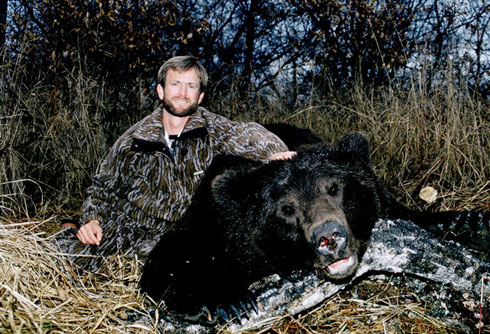 Author - younger, more headstrong than now with his grizzly.

The year was 1992, I had been living in Alaska for about a year and I thought I had the world by the short hairs. Up to that point I had hunted “The Last Frontier” as a nonresident a couple of times, shooting a handful of game — a pair of Dall sheep rams (one with my bow!), along with a very small assortment of caribou, black bears and a single moose and grizzly bear. I’d also been four times to Africa and been involved in some dangerous game hunting that could have turned out badly. I was young, fit and hardheaded — a dangerous combination to be set free in a land as unforgiving as Alaska can be.

I had a buddy who was an amazing bush pilot, flying full time for one of the finest fly-out fishing lodges in the Bristol Bay region. We hung out together a lot and in our free time had begun making trips to Kodiak island to hunt Sitka deer from little backpack tents set up after flying as far from civilization as we could. Much of that would come in subsequent years. This particular year he and I decided that it would be a good time for me to try and arrow one of the big brown bears that spent a lot of time around the fishing lodge. Since I had fished there a few times and seen it for myself, I foolishly figured it would be a snap. That foolishness almost cost me my life.

It was October and the last fishing clients of the year had just departed for home. My task was to help shut the lodge down for winter, bear hunting in the afternoons as we could. The lodge is located on a big lake and the bears cruised its shores and along the feeder river gorging themselves on the last salmon of the year.

On this drizzly, overcast day he and I took a small skiff out cruising the lakeshore looking for bears. When we spotted him, all we could see was his head. The big bear was swimming a small inlet, using it to cut the distance to get from one side to the other. We gunned the small motor but before we could get very close the bear had reached the bank and walked into the thick alders. That he was a big bear was not a question. Grandpa would have said he had a butt that was “two ax handles wide.” I wanted him.

So we beached the skiff and as my buddy secured it I grabbed my bow and the old .338 Win. Mag. I packed as backup and headed into the brush on his trail. We both figured the bear would be moving and my job was to locate him and, after my partner caught up, we’d figure out what to do next.

So. I enter the brush, but rather than move through, there the bear is, not 50 yards away. He’s lying on his back, rolling in some waist-high yellow grass, drying himself off. I’m stupid, so I sneak 20 yards closer, go to my knees, set the rifle down, nock an arrow and get ready.

To this day I do not how he knew I was there. The wind was perfect for me and I was quiet as a church mouse. But when that bear rolled over onto its feet it immediately stared right at me. Holy Buckets! Thirty yards away and he’s looking at me like that Cape buffalo Robert Ruark wrote about that looks at you like you owe him money. Right then and there my hackles came to attention and I wasn’t sure what was about to happen but knew it probably was not going to be a good day to be me.

The bear started doing what big bears do, swinging his head from side to side, lowly woofing, slobber slipping through his gums onto the grass. Then he gave me a chance. He turned his head and for a brief moment, looked away. When he did I let go of the string — I was shooting fingers — and reached down and wrapped my right hand around the grip on the .338.

What happened next occurred faster than the time it will take you to read this. The big bear swiveled his head around and charged. His first bound had to have covered 10 yards and took a fraction of a second. In that time I brought the rifle to my shoulder, not as I would a rifle to be aimed but instead a shotgun to be pointed, forced my head down on the stock and swung it at him. The second bound covered another 10 yards and he was accelerating. As he started to make his third and what I was sure would be the final bound his head came up slightly. I pulled the trigger and allowed the recoil to take me over backwards. When I hit the ground I tucked into a tight little ball, expecting at any second to be turned into a shuttlecock.

Nothing happened. The sound of the shot echoed across the countryside and I remained tucked into my little shell hoping at my funeral my mother would forgive my foolishness.

A few minutes passed and my buddy finally appeared. “What the hell!?,” he asked. It was then and only then, I dared peek. There, not 20 feet from me, lay the bear, graveyard dead. Seems my shot had miraculously entered his throat just under the chin, the bullet then striking the Atlas joint, breaking his neck and severing his spine. It was the ultimate Hail Mary.

I slowly stood, my knees not working so good and explained what had happened. It was not until we tried to roll the bear over to skin him out that I noticed that I had, indeed, wet my pants, and I am not ashamed to say it. I was scared out of my wits.

That bears remains the largest of the 12 grizzly/brown bears I have taken to date. His hide squared an honest 9 feet, 8 inches; when we weighed it back at the fishing lodge on a very accurate scale, with skull and paws intact that wet hide weighed 152 lbs.

Today the rug covers a wall in my little home office where I can see it every day, a stark reminder of what can happen when you get too big for your britches and think you have all the answers.

That day, I learned I didn’t even know the questions.