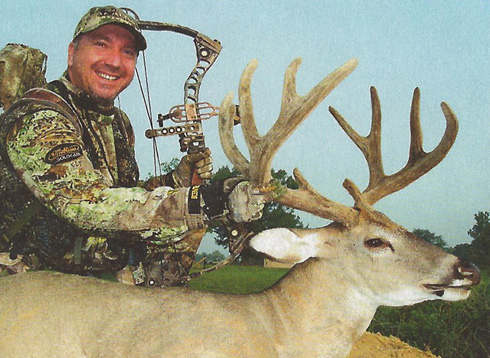 Whitetails of the East and South tend to rely more on thick forest cover. Food plots are especially useful in these areas. 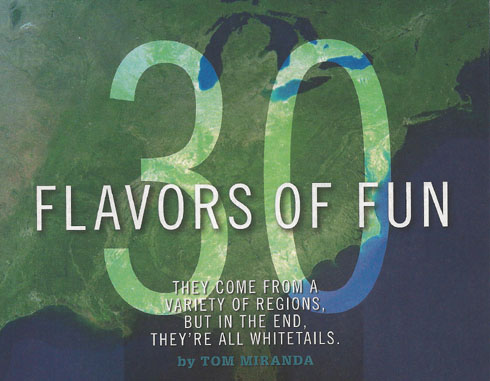 Although scientists have identified more than 30 subspecies of white-tailed deer, modern biologists concede that most of these animals fall into 16 main categories, with home ranges extending from southern Mexico north to the Northwest Territories. And, even though these deer look and act somewhat the same, there’s no doubt they are different creatures. Despite the differences, these deer can be outsmarted through basically the same hunting tactics employed by hunters from various regions.

Interestingly, whitetail subspecies are often segregated by large, definitive terrain features, such as major rivers and mountain ranges. Although the physical traits of some these deer are subtle, others are obvious; the desert (or Coues) whitetail falls into this category. 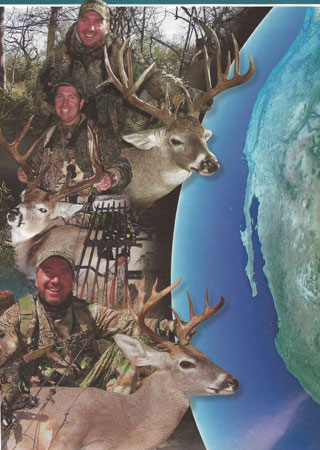 A Coues buck is a miniature deer — in body and antler configuration — compared to its Northern cousins. In fact, the Pope and Young Club recognize these bucks as smaller and offers a 65-inch minimum antler measurement for entry into its elite record book.

Even the Texas whitetail is an obvious oddball. With a doe-ish face and slender build, a South Texas brush buck almost looks like a cartoon character with 160 inches of antler sitting on a 160-pound frame.

On the other hand, when trying to score a deer “on the hoof,” the tough decisions come when big-buck hunters look at mature bucks from Kansas and Ohio, because there seems to be little difference in these deer.

Northeastern buck-hunters are often quicker to agree that there are major differences in their whitetail subspecies. Northeastern and Midwestern bucks can be tough to hunt, because the bucks that are lucky enough to live to 3 or 4 years old become nocturnal and nearly unkillable. This subspecies often thrives in suburbia and lives in and among a large human population.

I have seven whitetails side by side in my trophy room. These bucks were taken in Ohio, Texas, Mexcio, Kansas, Illinois, Kentucky and Saskatchewan. Each buck looks like a whitetail: white throat patch, tan coat and nice set of typical antlers. However, each deer also looks a little different.

There are slender noses, roman noses, light coats, and antler colors ranging from tan to white to dark chocolate. As I reflect on each of those hunts, each buck acted differently, and each was hunted with somewhat different tactics.

Western whitetails live in open country. Their not as shy as other subspecies and can be easier to hunt. In prairie states like Kansas and Colorado, whitetails often coexist with mule deer. These whitetails prefer the tree-lined river-bottom habitats and are quick to respond to rattling during the pre-rut.

I have rattled in as many as 15 deer in Kansas during morning hunts. Western deer also are quick to investigate scents. Mock scrapes and lure stations often attract more attention in Kansas or Iowa than they do in Ohio. This might be due to the fact the deer density is often lower in those regions.

Western whitetails also tend to have sun-lightened coats and, thus, blend well with dry grass and CRP cover. I have found that Western whitetails are also more in tune with weather changes. As the barometer drops, these deer move aggressively. Often, during the rut, mature bucks will troll the drainages and creek bottoms, scent-checking the narrow woodlots for estrous does. Bow hunters who set up to hunt these scenarios are often rewarded with close encounters.

Texas bucks are a breed all their own and — with a peak rut in December — a Texas tag can give Midwest buck-hunters two solid rut hunts a year.

With a slim build and slender face, a Texas buck often looks like a doe with antlers. However, these bucks often are elusive and tricky to bow-hunt. First, their relatively small bodies often deceive hunters as to the true antler score. Also, many a novice Texas buck-hunter shoots a great buck only to hold the antlers of a deer much smaller than was anticipated, hence the advent of the term “ground shrinkage.”

Texas hunters often use bait to lure does to roads or fire breaks during the December rut. This tactic helps lure mature bucks out of the dense mesquite thickets. The best bow-hunting setups in Texas that I’ve hunted consisted of brushed-in ladder stands in oak laurels where multiple trails lead to and from bedding cover to irrigated green fields. I’ve also found that Texas bucks move best in the mornings (from daylight until noon), with afternoon hunts less productive until last shooting light.

Desert whitetails are spooky. High-strung and flat-out nervous, these little deer are often referred to as the toughest whitetails to hunt.

Full-grown desert deer are pursued by everything from raptors to mountain lions. Coues deer [pronounced “cows”] prefer brushy desert hills, but they are also found in the pine tree mountains of central Arizona. Typically sporting only 4 points on a side (10-pointers are rare) these little bucks have all the senses of a Midwest whitetail in a small, nervous and tough-to-hunt package.

Spot-and-stalk bow-hunters often rely on tack-sharp accuracy, as shots are often more than 50 yards. Hunting near waterholes is often in vain, as mature Coues bucks are meticulous in sniffing out danger.

My experience with hunting Coues deer includes three tough hunts to kill one decent buck. These deer have an uncanny knack of sensing danger. Their erratic movements often have eyes looking 360 degrees, and they are quick to spot the slightest movement. As with most mountain game, desert whitetails use thermal wind currents to their advantage, and even the best ambush point is easily discovered.

Pop-up blinds hide movement and help contain odors. As a result, more Coues deer are now being taken from these setups, especially when placed in the shade of a large cactus or rock outcropping.

Canadian bucks are on the other side of the spectrum. Sporting big bodies, giant racks, and afraid of nothing, these huge whitetails live in the boreal forest fringes of agriculture.

Canadian bucks are often unpredictable. They live in sections of forest that contain bogs, beaver flowages and willow stands that will sustain them for years. In other words, there are many deer in Canada that have never been seen by a human. Hence, there are bucks that live to full maturity (6½ years) and die of old age without ever being seen by a hunter.

That’s not to say it’s easy to kill a big buck in Canada. It’s not. In fact, it’s not uncommon for a hunter to sit in a tree stand for several days and never even see a buck … yet there is always the chance of seeing the next world record. This game of chance is often the catalyst that drives hunters North to face 30-below temperatures to hunt these giant whitetails.

If you want to hunt Canada, a good rule of thumb is to do your homework and hunt the fringe of the big woods. Don’t trek into the middle. Work to intercept bucks on the periphery.

Make no mistake about it: Southern whitetails are forest deer. Before the popularity of food plots took the country by storm, most Southern deer were hunted and killed in the woods. These forests are infested with kudzu vines that look more like jungle habitat than a whitetail woods.

Most biologists use the Ohio River as the boundary between Midwest and Southern deer. And, although it wouldn’t seem that a northern Kentucky buck and southern Ohio buck would be that different, they are. I’ve bow hunted both areas and can attest that there is a distinct difference in look, attitude and size among these whitetails.

Food plots are an awesome strategy in the South. These small clearings attract does, which attract bucks. Food plots also offer easy access, as well as extra light in the late evening when many Southern bucks walk from their thick hideouts. Place your tree stands at least 20 feet high, and use surrounding trees to help hide your silhouette.

Midwest whitetails are the deer I grew up with. In my mind, these deer are the true whitetails and all others are subspecies.

I’m no biologist, but I know Midwest bucks inside and out. Mature Midwestern bucks identify a core area and live there until the rut. These areas are often smaller and less remote than one might think. Big rubs behind a farmers old barn often indicate a core area, and these bucks will sometimes live in a spot as small as 3 acres of spotty timber — literally unnoticed to the untrained eye.

Midwest bucks will work scented scrapes, respond to rattling, and investigate the sounds from a well-tuned grunt tube.

These bucks are also corn fed and large-bodied. Typically sporting a roman nose and leaving heavy dew clawed prints, these deer are the kings of the island woodlots and interspersed crops they call home.

Buck-hunting in the Midwest is popular and competitive. River bottoms that weave through farmlands are now often leased or tied up with permission by hunters who have hunted the same stand since the Bear Grizzly recurve was sold at K-Mart.

Success on big Midwest bucks is like anywhere else; it’s all about location. My trapping background taught me a lot about how to hunt these deer, and it got me plenty of hunting permissions. Trapping nuisance raccoons and skunks can be a ticket to prime deer hunting areas, and with today’s low fur prices, farmers are overrun with critters. Teaching a farmer’s son the ropes of archery will also get you bonus points.

When it comes to pure smarts and wariness, the Midwest whitetail is unmatched. If he figures you out,  you’ll probably never see him again.

If you’ve never hunted a different whitetail subspecies, maybe it’s time to give it a try. There’s no doubt that whitetails are whitetails, but once you have two or three different subspecies on your wall, visiting friends will invariably ask, “Where did you get that odd-looking buck?”

That will give you the perfect opportunity to share the story of what will surely be a once-in-a-lifetime memory.

Tom Miranda is a TV bow hunter with more than 30 years experience. He has taken many subspecies of whitetails, the Archery Super Slam of 29  North American big-game animals. For more go to:  www.whitetailslam.com

If you want to get Close Enough to Kill then your choice should always be: Robinson Outdoor Products –  Scent Shield & Scent Blocker

Reprinted with thanks from Whitetails Close Enough to Kill – FW Media