The newest addition to the Bohning® family of vanes is the IMPULSE™ – this revolutionary vane is the result of over 2 years of research in aerodynamics and materials engineering.

IMPULSE™ is a super low-profile, light-weight, high-durability vane that is blowing away the competition across the country and the globe. Thanks to its low profile, the IMPULSE™ has 14% less chance of hitting the arrow rest than the leading Mylar vane. Further tests show that in the event of rest contact, there is significantly less shaft deflection than with Mylar vanes.

The composite vane material [a technology typically used in the aerospace industry] maintains its stiffness while resulting in 50% less weight than our standard material. This, combined with its low profile, makes the IMPULSE™ very efficient in high winds and unstable conditions. Though this vane was designed primarily for Olympic Recurve shooters, compound shooters around the world are also reporting fabulous results. Full research findings, product reviews and testimonials can be found on our website at www.bohning.com! 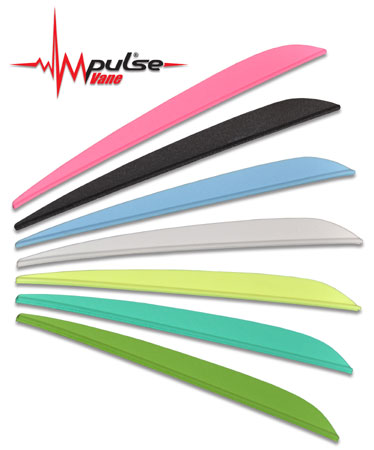 Bohning® is pleased to congratulate Lee Ford on her qualification to the 2012 US Paralympic Team!

We are so proud of Lee and couldn’t be happier that she will be using her IMPULSE™ vanes at the 2012 Olympics!

“I used to have right to left issues as I changed distances, but this didn’t happen yesterday. 70 meters was grouping and when I moved to 50 meters I didn’t have any issues with where my groups went. Also, some of the targets need their material changed out so I had some wicked pass-throughs too. The Impulse™ vanes came through perfectly! I used to shoot Italian vanes after using spin vanes, they are a stiffer mylar, but would still have breakage from contact with the rest or the clicker. None of those issues with the Impulse™. I had some amazing groups, even though I’m fighting a horrible cold and just cranked the poundage up on the bows a bit for outdoor. I tested against the Eli Vanes and the Gas Pro vanes. Pass-throughs on those vanes aren’t as bad as with Spin Wings but they still get trashed or creased. I had 6 of each vane fletched up and the groups with the Impulse™ were just tighter, no doubt about it. Plus I like that they’re made in America!”

“I’m so excited, I can’t contain myself!  The wind picked up like it was Ari­zona Cup during the last of the round robins and every archer during the last 2 matches had a hard time of it but me. The next to last match, I had the highest score, even against the recurve men! The next end was just as windy, and I shot a 101 for an extra bonus point. The vanes held up well when we had London type weather, between having a Carbon Express arrow and Impulse™ vanes, my arrows didn’t drop in the rain.

Also, another archer and I smacked arrows on the target, trying to put them in the same place in the 9 ring. Her spin wing was destroyed, my Impulse™ had a tiny little lift off the arrow which I glued down & it shot perfectly fine the rest of the week. I really think the Impulse™ made a difference for me. The 1056 was also a personal best double 70 round score!

Thank you so much for your support and I’m going to be working hard to bring home the gold!”

Impulse™ is currently available in 3” and 4” lengths and 7 colors.

No Excuse for Ignorant Laws