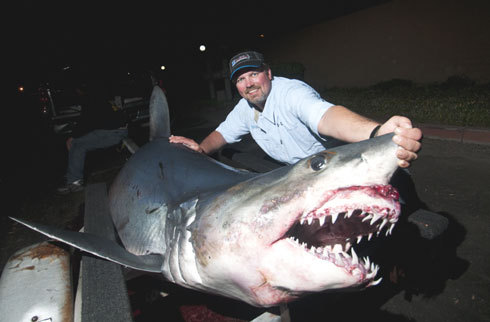 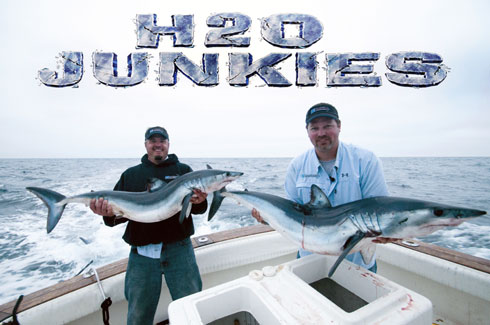 The sport of bowfishing has seen a large increase in popularity the last three years due to the excitement and wide range of opportunity. The main targeted species are common carp as they are found throughout the States in large numbers and call rivers, streams, flowages and lakes their home. However with bowfishing, along with anything else in life, you’re always looking for something new and adventurous to do.

Jeff has taken shark in the past but those were all in-shore journeys with the use of float systems and maybe a ½ hr boat ride to the location. On this journey they would be traveling six hours off-shore in water depths reaching 2 miles so the use of floats was out of the question. The gear they would be using on this adventure included the popular AMS Fire Eagle bows and AMS Tigershark arrows tipped with a tough 3 barb grapple. They would be tying a 1000 lb wire leader to a ring system attached to the arrow. The leader was then attached to a big game fishing pole.

Just like any big game hunt it involves long hours, practice and a little luck. You can imagine what happens to an arrow being shot with a 1000 lb wire attached to it. It drops dramatically, plus you have the 10-15 foot rollers bobbing the boat up and down.

Day One started at 3am with everyone meeting at the marina. We all watched as the Hollywood shoreline disappeared and we were engulfed by nothing but blue water and sky.

Once we arrived at the captain’s location at 9am everyone was excited to say the least. Little did we know how much work was involved in a shark trip? The chumming for shark is done non-stop as hundreds of seagulls descend filling their bellies with our bait. To make a long story short all we saw on Day One were seagulls and water, no shark sightings. The six hour ride back to the marina seemed to last forever as we all felt bummed out after having had such high hopes.

Plans were made for Day Two with a departure time of 2am as Mako Matt wanted to make a longer run to some new water. The alarm buzzed at 1am and it was hard to get out of bed, as we were really not looking forward to the 7 hour boat ride. After the disappointment of the previous day we were all hoping this day would have a better result.

We arrived at the location around 8am and Mako Matt went to work on what he calls a ‘Power Chum’. He mixed up a couple hundred pounds of bait and started to lay down a heavy chum line. Over the the course of the day we had a few visitors hit the chum as seals and porpoises swam by to grab a bite to eat but no sharks.

Hopes were dwindling fast when suddenly Mathew yelled and said something big was swimming under the boat. Everybody jumped into action but the excitement was short lived as it was only an Ocean Sunfish.

Around 2pm Mako Matt noted the seagulls were acting funny and told everybody to get ready. Then a fin broke the surface. A Mako was cutting through the chum toward the boat. Now it wasn’t the biggest Mako shark but it didn’t take long for Mathew to yell “I’ll take it”.

The shark made a few passes before offering a good shot and on the third pass Mathew released an arrow striking the shark behind the head. After a short fight on the fishing pole we had our first Mako shark. Mathew was all excited and commented “It might not be the biggest shark but how many people can say they have shot a Mako Shark with a bow”?

We had two hours left before the trip was over and Jeff was anxious for his turn. He didn’t have long to wait as another Mako appeared and after the fifth pass Jeff and his Fire Eagle connected and the fight was on. This shark had a lot of fight in him and it took Jeff 35 minutes to get him to the boat.
We did it, two Mako sharks with the bow in the matter of minutes. We were all high fiving and back slapping when Mako Matt yelled that we still have 30 minutes of chum left. Know I’m thinking to myself, ‘We have been out here for two days chumming like crazy and saw two sharks, what could possibly happen in 30 minutes’? or should I say 2 minutes?

We were literally down to our last minute of chum when suddenly the line of seagulls erupted off the water and disappeared. Mako Matt said “Get ready boys, something big is coming in”.

All eyes were on the chum line when suddenly a dark torpedo shape emerged from the right side of the boat, broke the surface and with began chewing on the chum pump hanging on the side of the boat. I couldn’t believe the size of this shark and how quickly it would disappear then reappear out of nowhere.

Nobody knew what to do so Mako Matt said we should hook this fish because this Mako was just too big for an arrow. Matt thought this fish could tip the state record at 1200lbs. He has regularly taken fish up to 500# with a bow but has had limited success with fish larger than that as the ensuing fights were too long and too hard for the hide to hold the point. We all agreed that Jeff would hook the monster Mako and try to boat it with the stout pole. While we were getting rigged up with a hook another shark appeared and another. We were surrounded by Mako sharks and I can remember hearing Mako Matt yell “Whatever you do, don’t fall in the water”.

Soon the bait was set and Matt threw it in the water and we all watched as the monster Mako took the bait and swam under the boat and then swam behind us. Mako Matt told Jeff to wait until his command to set the hook and make sure to set it 4 or 5 times and then hang on.

There we were, a couple of Wisconsin boys somewhere in the middle of the Pacific Ocean getting ready to battle with a monster Mako. Then the command was yelled “Set it, Harder, Harder, Harder”. At that moment all I could hear was the drag from the pole as hundreds of yards of line was spooled off in seconds. It was 4pm and the battle had begun. The minutes ticked into hours and after 3hrs we finally could see the monster Mako. We decided to see if we could bring him in for the gaff but the shark made a great run and was back out into the deep. 4 hours into the battle we finally had the shark close enough to the boat to tie off.

Because of the size of the shark we had to drag it all the way back to the marina. We arrived at 12:30am and only then did we get to see how big this giant truly was. 10 ½ feet long with a 5 foot girth he tipped the scale at a whopping 750lbs. This was truly the catch of a lifetime.

We flew back home with what we could take on the plane, 150 lbs of some of the finest meat I have ever had with the rest being donated to a local church. We also have the jaws from all the sharks as mementos from this great and exciting adventure. I’m sure we will be back out to visit Mako Matt in the future but next time there will be no hooks allowed in the boat, it’s gonna be strictly bowfishing gear.