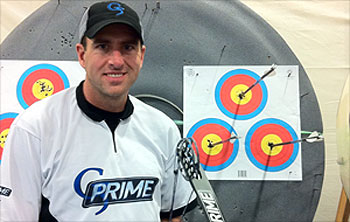 G5® Outdoors, the leading manufacturer of premium archery equipment is proud to announce that Prime™ shooter Dave Cousins won the Welsh Masters Euro Pro Series this past weekend, which now gives him a perfect seven-for-seven record at the Doinker Welsh Masters.

“Dave has done a tremendous job representing the G5 Brand and our Prime™ bow with such class and distinction, we couldn’t be happier,” stated Joel Harris, Brand Manager for G5 Outdoors.

His perseverance, skill and experience showed on Sunday when Dave quickly began his climb up the standings. With his Prime™ bow in hand Dave navigated the course that was comprised of 28 targets in the IFAA Field on Saturday and 20 IFAA International targets on Sunday. This win has such distinction as it is an invite only event that features 56 of the top compound archers in the world and forces competitors to bring their best shooting skills, but also their mental toughness as one target you’re shooting side by side with your competitors and the next you could be shooting through a castle.

“This year has just been incredible so far, I never would’ve thought I would go for seven-for-seven” exclaimed Dave. “The Prime™ Bow has just been amazing!”

Dave Cousins is a 32 time National Championship, 12 time World Champion, 2 time Vegas Champion, in addition to being a multi-time USAA and NFAA shooter of the year. Dave has also been ranked #1 in the US for over a decade and #1 in the World on multiple occasions. He also holds 23 world records, 18 FITA World Championship Medals including 11 gold, 5 silver and 2 bronze.

About G5 Outdoors:
G5® Outdoors L.L.C. is a family owned business established in 2000 and backed by more than 40 years of precision manufacturing experience. G5® strives to provide superior products that are Designed to Hunt™ through precision manufacturing and innovative design. To learn more about the new prime series of bows, visit www.g5prime.com or call (866)456-8836.

Barnett Comes Out With a Vengeance

The Bestest Turkey Hunt Ever