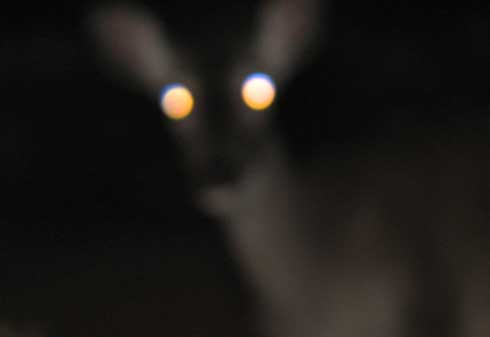 We've all seen "deer eyes" in the head lights of our truck or in the glow of a spot light. The magic is a reflector designed to double available light. And yes, those 1-million watt Q-beams must be uncomfortable to a deer's eyes.

How often do you observe deer running into trees at night? Never, is the answer. That is because they can see as good at night as you can at noon. It has to do with the physiology of the deer’s eye. They are designed to operate in low to no light conditions.

At a recent seminar, after asking the, “Running into trees” question some guy asked, “So why are they running into my truck at night?” The answer has to do with the “hard drive” in a deer’s head. Deer don’t have a file folder on what 4X4 predators look like but because Ford trucks have not been around for long. You see trucks don’t make the predator folder. However, that’s another deer story, let’s get back to night vision.

Deer have been designed to fill an environmental niche that includes dawn and dusk plus the dark of night. That’s when deer operate and when they must avoid most predators. It may not surprise you that they have amazing night vision but the details may interest you. Deer are masters at vision when there is not enough light to detect color. In this low-light world black and white vision rules. We call this scotopic vision and deer are designed to maximize it in many ways.

A deer’s pupil can open wider than a humans to admit more light. Since it is the total area of the pupil that is important, the light gathering power of the eye increases as the square of the pupil diameter. Thus, an eye of about the same size as the human eye with a pupil that can open to three times the diameter of the human pupil gathers 9 times more light. (Note that it is not the eye size that is important for visual sensitivity but rather the size of the pupil relative to eye size. Large eye size is important, however, for good resolution of detail).

All vision is initiated when light entering the pupil strikes the retina. Light is registered on a light sensitive layer of tissue at the back of the eye that is analogous to the film in a camera. The retina contains two kinds of light-sensitive receptor cells, rods and cones. The cones are responsible for day-time vision and color vision. Rods are responsible for vision in dim light. The central region of the human eye (the fovea) on which we depend on most for vision is tightly packed with cones but contains no rods. The rest of the human retina contains both rods and cones. The ratio of rods to cones increases in the periphery of the human retina.

Deer specifically, but all ungulates (hoofed animals) also have both rods and cones but rods predominate (even in the central area) making up well over 90 percent of the total photoreceptors over the entire area of the retina. The rods are incredibly sensitive to light—about one-thousand times more sensitive than cones. The high ratio of rods to cones (almost 10 to 1) in the eyes of ungulates makes them very sensitive to dim light and especially sensitive to shorter wavelengths of light as described below.

It is believed that deer have over 90% rods in their eyes. Imagine that each of these rods is a thousand times more sensitive to light than a cone cell. Now they are beginning to see quite well in the dark.

In addition, ungulates, cats, dogs and predators have a reflective layer in back of the retina that greatly enhances sensitivity. This reflector is called a reflective tapetum. We see the effect of the reflective tapetum as “Eye shine” in animals. Human eyes don’t shine at night because light that transits the retina without being absorbed by a photoreceptor cell is lost. The effect of the tapetum for the animal is that if light that passes through the retina without activating a photoreceptor the first time is “recycled.” Then it is reflected back to the photoreceptors for a second chance. In essence doubling all received light.

So let’s connect the dots.

How well does a deer see on a cloudy moonless night under the canopy of leaves? About as good as you do at noon. This makes me think about a particular behavior that a lot of we hunters engage in. Ever sneak into the woods an hour before daylight with a flashlight that has a red filter on the lens? We must look pretty funny to the deer watching us, to them it looks like noon.

Black and white deer vision is interesting but the real important finding about deer vision has to do with UV light and how a deer sees UV. Go to www.Atsko.com and learn about U-V-KILLER and how it can make you a more effective whitetailer. My next article will address the UV issue.

Nikon Brings it Close with Monarch 5