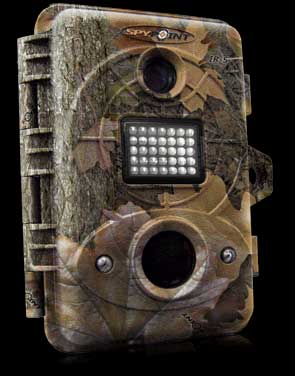 Spypoint IR-5 The Camera That Will “WOW” You!

Some of the technological advances we have witnessed over the last 10-15 years have proven to be a huge help to us in our hunting endeavors. One such advancement is the use of digital trail cameras to help us scout our hunting areas. Nothing quite like being there, even when we can’t be there physically, to help us learn what animals are in our favorite hunting spots, their patterns, their movements and even to learn where we can get away from other hunters on public land.
I have used a number of trail cameras over the past several years to help in my quest for filling those hard to acquire tags. As part of our 2011-2012 hunting season here in New Mexico, we decided to do a series of reviews on a number of camera makes and models in search of the perfect camera for our extreme hunting conditions here in New Mexico. We wanted to test as many as possible to determine which camera could go from timberline during elk season to the lowest desert for our sheep hunts and function everywhere in between for elk, antelope, lions, bears and deer. One thing is for sure, we learned a lot about a number of different cameras.

All of the cameras we used had good points. Some had a few minor issues but one camera put everything together and really gave us that ‘WOW’ factor. ‘WOW’ not just from the photo quality, but for all aspects of the camera, from setting it up to looking at the treasures on the card after months in the field. The Spypoint IR-5 truly sets the standard for trail camera quality.

Now that we know what the technical claims are for this camera, let’s talk about what we found this camera can really do. When everything was compiled, counted and reviewed this camera exceeded our expectation in every single aspect! GG Telecom has done a magnificent job of putting all of the best components possible into one camera. The compact size is one of the biggest benefits of this camera; however, all the best of everything else comes with it!

The PIR sensor worked far better than advertised. The specifications on the camera listed the PIR range at 5-50 feet (adjustable). We had numerous photos where the subject triggered the camera at over 80 feet at the high sensitivity setting (you can adjust the sensitivity from 5 to 50 feet)! We also noted that the LED range (35 infrared LED’s) was extended beyond the advertised 50 feet PIR distance. Overall, we would rate the sensor system in the IR-5 as significantly above average.

The trigger speed was awesome. We noted in numerous instances that animals walking at slow to average speeds would not reach the full field of view prior to the picture being captured. We had many front half photos, and not a single back half photo. We found the recovery time to be as fast as 3 seconds in the daytime in multi-shot mode and around 10 seconds at night. Recovery time was slightly slower at night as would be expected; however with the camera set to record four photos per trigger, we had numerous sets of four shots at night.

The SpyPoint IR-5 comes with a number of very useful features including the ability to record photos or videos. Videos are recorded as 640X480 AVI files in lengths of 10, 30, 60 or 90 seconds and the quality is great. The IR-5 can be set to allow for delays of 1, 3, 5 or 15 minutes between triggers and the multi-shot mode allows you to pick between 1 and 4 photos at each trigger. Another very helpful feature of this camera is the user’s ability to remove the camera from the protective housing to set everything up. No more standing on your head to get the settings right or to change them in the field. Oh yeah, and no more carrying your manual with you to remember how to set it up, the instructions are right inside the door of the housing!

Overall, the picture quality was great, and far sharper than one would expect based on use of comparable 5MP cameras. The pictures were very clear with extra detail and color. Each picture is also date and time stamped. Nighttime photos maintained this same level of quality. As we all know, the night photos from most cameras can be poor and become pixilated quickly as you try to brighten or blow them up to see the subject more clearly. With the IR-5, the night photos were some of the best photos we have seen from all the camera systems we reviewed.

The IR-5 operates on 6 AA batteries. Battery life was excellent compared with the other cameras we reviewed. After 4 months and hundreds of pictures, the camera is still ready to go right back out in the field with the same set of batteries and plenty of confidence that they won’t fail any time in the near future. All in all, I would say that the camera could easily operate for at least 8 months and quite possibly the full year with one set of high quality batteries. Of course, this is dependent on the number of pictures the camera takes, whether they are at day or at night and operating temperatures.

The IR-5 comes in a rock solid protective housing that has double jointed swivel snaps and is lockable. The door hinge runs the full length of the housing which also adds to its durability. The housing has tree gripping teeth on the back that actually work and comes with a long one-inch nylon strap for securing the housing to whatever you choose to anchor it to. We had this camera up in numerous locations and it held firmly in place in every one of them. Even those pesky ranch bulls could not rub it off of the tree we had it secured to!

Another great feature of the IR-5 is that it is extremely easy to program. The camera has 4 slide buttons and three push buttons used to set up and operate it. Set-up was extremely easy and having those directions right inside the camera housing sure is handy!

Overall, we highly recommend this camera to everyone looking for a trail camera. I would have nothing but confidence using the IR-5 in any circumstance. Based on how the camera operated during our review, I believe the camera would work perfectly in any setting from trails to water holes, or anywhere else in between! There are just no weak points to this camera and I would rank it #1 in all categories.

Spypoint has a full line of quality cameras so I urge you to check them out at:  Spypoint Cameras.