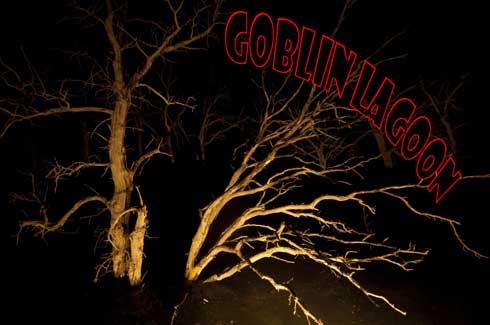 I have been to South Dakota in the past icefishing for jumbo perch and fishing the large reservoirs for walleye, but I never gave it much thought for bowfishing. I received a phone call from Pro Staffer Ty Smith from Aberdeen South Dakota inviting us out for some common carp bowfishing action. Ty promised us we wouldn’t be disappointed, so it didn’t take long to make plans and head west.
Ty Smith has been part of the AMS Bowfishing pro staff for 10 years. Ty has worked hand and hand with the South Dakota Game and Fish on carp seasons, and if you like to bowfish at night you can thank him. He also volunteers his time with hunter education classes and teaches bowfishing safety and guide lines to the young bowfishers.

The nine hour drive didn’t take long as visions of 30 pound gold nuggets kept swimming in my head. Once we arrived at our location in South Dakota we stopped at a local bait shop to get our license, grabbed a map of the lake and headed for the boat launch.
We had just finished unloading the boat when Ty called and told us he would be a few hours late as he got stuck at work, so we jumped in the boat and went looking for carp on our own. After studying the map for a while we decided to hit a sunken island that was bordered by hundreds of dead trees.

When we reached the location we were greeted by a bowfisherman’s best friend, clear water. As we eased into the small cove dead tree limbs scratched the sides of the boat and red wing blackbirds hovered above us warning us to stay clear of their nest. It didn’t take long and we could see carp splashing in the shallow corners and we knew this was the right spot.

As we eased into the back corners were the water was shallower we could see the backs of several carp and the splashing ritual that takes place when the water temps hit 67 degrees. We were in carp heaven. We just sat back and watched as 20-30 pound carp cruised through the weeds and right under the boat. I couldn’t take it anymore. I said to Jeff either you grab a bow or the camera but somebody needs to start sticking fish.

For the next 3 hours we truly had a blast shooting and filming some big’ol South Dakota commons. It was the perfect location. Clear water, bluebird skies, awesome scenery and all the carp you wanted. 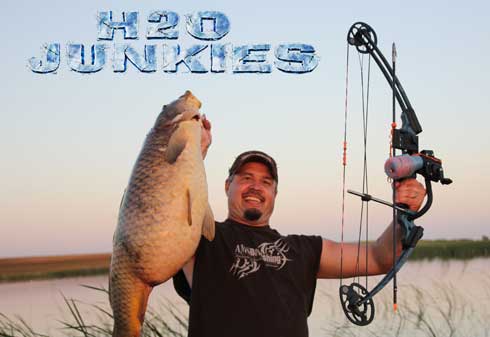 Ty finally called so we headed back into town to grab a bite to eat, found a motel so we could unload some gear and get ready for some nighttime bowfishing. When we arrived at the boat launch we were greeted by a few local walleye fishermen and they were intrigued by the funny looking boat we had with all the lights. At first they thought we were the DNR getting ready to go out and shock the water, but after we told them what we do they couldn’t thank us enough. They were so happy that we where removing carp from there walleye lake.

The boat ride out to our little honey hole was breath taking as the sun had already disappeared but left a reddish orange hue in the western sky and the farmsteads were silhouetted on the rolling landscape. When we reached the lagoon and turned the lights on it was more of a Halloween scene then your normal bowfishing background. Large dead tree limbs reached out like giant arms, the moon cast a glare on the water and the silhouette of all the trees gave it an eerie feeling. Then just like floating goblins carp started to appear from their hiding places.

Ty and Jeff where on fire as they had three barrels full of giant carp and there was no sign of the goblins giving up. You know you’re in carp heaven when you start to pass up 20 pound fish. With plenty of video and a boat load of fish it was time to head back to town for some much needed rest.

As we left the lagoon I watched as the trees disappeared in the darkness and hoped that I would get a chance to come back out to South Dakota and visit Goblin Lagoon. I would like to thank AMS Bowfishing Pro Staffer Ty Smith for taking time to show us some great South Dakota scenery and some fast and furious bowfishing action. Ty was right when he said we wouldn’t be disappointed.

For the best in bowfishing adventure go to: AMS Bowfishing