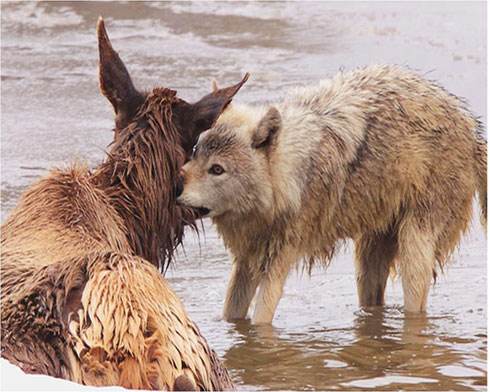 Out of control wolf numbers in the Northern Rockies have resulted in the near 80% loss of elk populations in many parts of Northern Idaho and Western Montana. State wildlife agencies have purposely downplayed true wolf numbers.

Now, that”s a pretty strong statement to be openly making about Governor Brian Schweitzer and Montana Fish, Wildlife and Parks. Perhaps, but that elected official and the state fish and wildlife agency he literally rules have just as openly ignored state legislation mandating procedures the agency must take or how, under Schweitzer, MT FWP has totally violated the mission they are supposed to fulfill, as outlined by law in the Montana State Constitution.

The most recent violation of enacted state legislation involves the moving of Yellowstone bison onto the Ft. Peck Indian Reservation in the northeastern corner of the state.

During the 62nd Legislature in April of last year, a bill known as SB212 was signed into law. The purpose of that legislation was to establish “An Act Clarifying The Authority Of The Department Of Fish, Wildlife And Parks To Manage Wild Buffalo Or Bison”. One of the very first requirements of that legislation clearly mandated MT FWP to submit a management plan before wild buffalo or bison were released or transplanted onto private or public land.

State Senator Greg Hinkle (R-SD 7), Thompson Falls, MT has stated, “We passed SB212 last session requiring FWP to have a Management Plan and an Environmental Impact Statement before any bison were transported in the state. They went ahead, over a weekend, and transported bison to Fort Peck without obeying the law. In my view, in direct defiance of the mandates from the legislature.”

MT FWP covertly transported those bison from the Yellowstone area to the Ft. Peck Indian Reservation in late March. And that has not set well with the Montana legislators who drafted SB212, which passed into law with a 91 to 8 vote. The illegal moving of those buffalo has also upset those with the Montana Stockgrowers Association.

In a MSGA release on March 21, executive vice president Errol Rice stated, “MSGA is disappointed to learn of a deal being signed between Fort Peck and the state of Montana for the relocation of bison without any of the concerned parties having the opportunity to review the agreement before action was taken.”

Rice pointed out that bison management and bison relocation is a top priority for MSGA, adding “During the 2011 Montana Legislature, we worked hard to ensure the passage of SB 212, which requires FWP to adopt a management plan before bison are translocated anywhere in the state of Montana. MSGA members also passed policy in 2011 declaring that MSGA opposes bison relocation, but should the state decide to proceed with a relocation proposal, it should adequately reflect the intent of SB 212. It is unfortunate that this deal was done without the opportunity for more local input and due process. We have requested a draft of the agreement signed from the state of Montana to review on behalf of the ranching community, especially to ensure that all elements of SB 212 were addressed and disease monitoring protocol are followed.”

State Representative Wayne Stahl (R – HD35), Saco, MT is calling for Schweitzer”s impeachment, accusing the governor and other officials of intentionally and knowingly breaking Montana law. In order for that to happen, the Legislature would have to call a special session, requiring a majority vote to put the governor on trial by the 67 members of the House.

“He is really not caring whether he breaks the law or not,” claims Stahl. He points out that Schweitzer, in a nonchalant manner, intentionally ignored the law which he had signed into being law. He asks, “What”s next?”

Many Montanans have repeatedly accused Governor Schweitzer and upper management at Fish, Wildlife and Parks, along with a few members of the FWP Commission, of violating state law with the manner in which they have handled the wolf issue. With wildlife populations in much of the western half of the state in shambles, due to excessive predator numbers, especially wolves, MT FWP and the FWP Commission have been accused of lying about the true number of wolves in this state. Even though once great elk herds, such as the Northern Yellowstone herd and the West Fork of the Bitterroot herd, along with most others up and down the west side of Montana have been pulled down by as much as 80-percent, FWP has basically called the sportsmen who speak out against the loss “liars” by falsely reporting much higher populations. The agency has also tried to shift much of the blame on mountain lions and bears – and even global warming.

Residents of this state know better. They have witnessed firsthand the dramatic rise in wolf numbers, and the dramatic loss of the past 75 years of wildlife conservation. They”ve also felt the loss of hunting opportunities, even though the Montana State Constitution guarantees that FWP”s mission is to ensure an abundance of wildlife and quality hunting. Montana”s hunters and wildlife watchers are fully aware that the real cause of all this loss is due to excessive wolf numbers, with a real wolf population of “at least” 2,000. FWP is currently claiming an “at least” wolf population of just 653 – and that the state”s elk herds are “at objective”.

Montana State Senator Debby Barrett, (R – SD36), Dillon, MT points out that MT FWP has operated in violation of state law for quite a while, by not fulfilling its obligation as mandated by the State Constitution and State Legislation. On several occasions, while testifying in front of the state”s Environmental Quality Council, she has openly accused the agency of also violating its own policies.

Even so, she says that FWP Director Joe Maurier claims that the agency cannot implement these plans – due to lack of funding. Still, earlier this year FWP chose to give across the board pay raises for FWP employees, with some fairly lavish jumps in salary for top level supervisors. FWP chose to do so over mandated commitments, such as adequate wolf control.

She adds, “Legislators had the foresight to actually get certain portions of those Wildlife Management Plans codified into law. The agency must comply with state law – whether funded or not.”

Debby Barrett feels that the only way this issue will ever be resolved is for a major lawsuit to be filed against MT FWP. In Montana, the state”s fish and wildlife agency answers directly to the governor. For MT FWP to operate in violation of State Legislation and the State Constitution means that their actions, or lack of appropriate actions, have had Brian Schweitzer”s seal of approval.

All of this has openly taken place with the state”s Attorney General, Steve Bullock, turning a blind eye away from all of the corruption. Now, he”s running on the Democratic ticket to replace Schweitzer as Governor of Montana. Many Montana residents are now wondering, if Bullock is elected, will the wolf nightmare continue? – Toby Bridges, LOBO WATCH