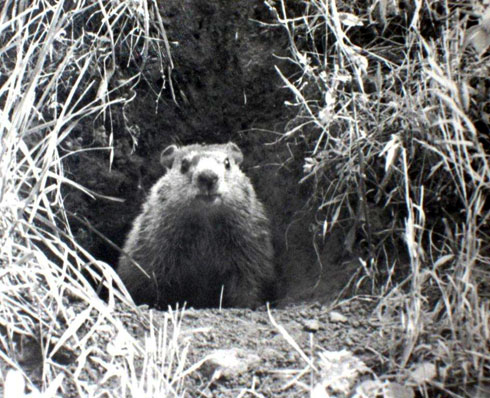 AIMING SMALL PAYS OFF BIG when it comes to bowhunting accuracy. “Pick a spot” is sage advice dating back to the early days of bowhunter education when shooters were urged to imagine placing a shiny half dollar “In the center of the lung area and shoot at the half dollar, not at the whole deer or even the whole lung area.” It’s all about common sense, confidence and the ability to hit where you’re aiming.

For my money, there’s no better way to practice for big game than to practice by hunting the small game and varmints found close to home. Rabbits and squirrels, in season, are fine, but you shouldn’t overlook off-season challenges offered by the ubiquitous woodchuck – or his western cousin the rockchuck, plus the common ground squirrel, gopher, and prairie dog. One or more species of these pesky pests should be readily available to a majority of North America’s bowhunters.

Stalking within bow range of these furry targets as they feed or sun themselves is generally difficult. Seemingly ever alert, they often stand upright to survey their surroundings for predators. Their eyesight is excellent and they’re quick to zero in on careless movements. As if this doesn’t present enough of a stalking challenge, their hearing isn’t half bad, either.

Like many midwesterners, I grew up trying to sneak up on farmland ‘chucks that made nuisances of themselves by raiding beanfields, gardens, and other food sources that didn’t endear themselves to farmers. More than once I gained access to bowhunt posted property year-round by volunteering to whittle away the resident groundhog population during the spring and summer. Active feeders early and late in the day, ‘chucks can be glassed and stalked by using the terrain and existing cover to my advantage. Sharp broadheads are mandatory on these chunky rodents, which will dash headlong for their burrows at the first hint of danger.

Later, during the decade and a half I lived in Montana, I eagerly sampled the challenge of stalking rockchucks and enjoyed modest success. Like groundhogs, marmots offer essentially the same challenge; however, the biggest problem I encountered was the rocky, arrow- destroying terrain where the whistlepigs are found. Broadheads and hunting arrows usually have short life spans in habitat where “one-and-done” shots are the norm.

Gophers and prairie dogs are an entirely different matter. I’ve released countless arrows at these tiny, hyperactive critters widely regarded as destructive pests. Their arrow-dodging ability is legendary, but locating colonies of the plentiful targets is often easy. Highly visible and vocal, they can be tough to approach in the open terrain they favor, but slow and easy efforts can be rewarded with plenty of shooting opportunities. Personally, I always honed my open country range estimation abilities before heading off on a caribou, pronghorn, or prairie mule deer bowhunt. Judging distances and consistently hitting (or barely missing) a pint-sized target at common bowhunting yardages builds shooting confidence like little else can. Sure, 3-D animal targets are great for keeping the rust off, but it’s not the same as releasing an arrow at a live animal capable of instantly reacting to the release of an arrow or incoming shaft. Believe it!

A secondary bonus to shooting at gophers is it’s a great way to get kids and budding bowhunters interested in archery. Most any bow and set of arrows will suffice. And while broadheads are necessary for woodchucks and marmots, blunts, Judo points, and even target points are potent gopher getters. Action can be fast and furious, generating enthusiasm and excitement no foam or paper target offers.

Frankly, I’m baffled by bowhunters who let their favorite bow gather dust after deer season ends. Shooting a bow should be fun, anytime of the year. And while it’s true that practice doesn’t always make perfect, perfect practice goes a long way toward making any shooter better. Given the choice, I’ll opt to practice shooting at small targets whenever I can. It makes shooting a big buck or bull during bow season seem huge by comparison. All I need to do then is pick a tiny spot on his ribs and release.

Sounds of the Wild Turkey

Sounds of the Wild Turkey