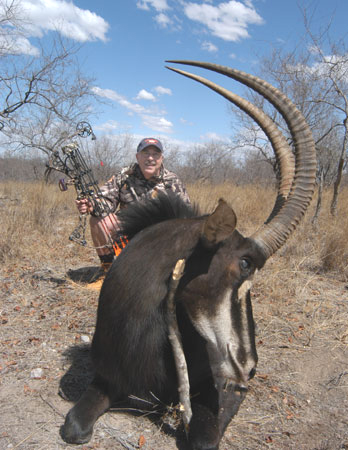 Author with his magnificent Sable Antelope.

Ever dream of hunting Africa?  The current economy and the various states of political unrest in many locals has slowed things down, but despite all of that bowhunting Africa is still the one of the best values in the world of hunting, you can hunt several species on the same trip and really pack your stay with bagging African animals.  I have been fortunate to hunt all over the world in the last 40 years. I don’t know a place in the world where a hunter can see the quality and quantity of game animals they would on a plains game hunt in South Africa.  Bowhunting the mysterious Dark Continent’s bushveld and savannah regions is fascinating as these areas are still home to large numbers of the game universally associated with Africa.  A true African safari can be one of the most exciting and rewarding experiences of a lifetime, well worth the effort of proper planning.

I have hunted South Africa for the last several years with my friend Jurie Meyer of Afri-Bushveld Adventures Jurie is a Professional Hunter (PH) which is like a guide here.  I have had the opportunity to harvest some absolutely spectacular animals.  This year I wanted to concentrate on a Sable because they have stirred my imagination ever since I was a little kid.

One of Africa’s iconic species, the regal Sable with their scimitar horns and pitch black coats rank as the most striking of all animals on the continent.  Their magnificent horns, contrasting colors, and relative scarcity make them a highly desirable trophy animal.

Sable live in lightly wooded areas called “miombo” a mixture of bush and grassland, but they usually avoid open, grassy plains.  The Sable bull turns darker with age eventually reaching their pitch black color when fully mature and ready to challenge for a herd position.  A mature bull will have a powerful robust build, vertical mane and fantastically long curved horns which arch majestically backwards.  A true trophy will have horns that measure at least 40 inches with bases 9 inches or more.  Even the King of the Jungle, the majestic lion shows a great deal of respect for these animals.  There have been numerous instances of the big cats having been gored to death by a Sable bull. 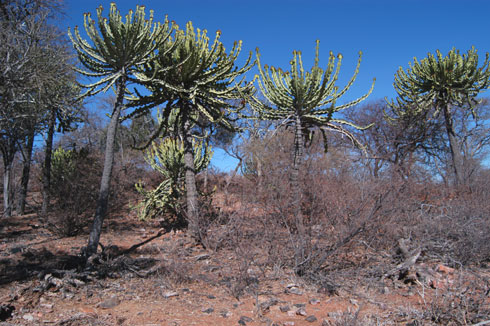 We hunted very hard for several days of my safari searching for the mystical 40-inch sable of my dreams, passing on several nice animals that Jurie judged to be in the 36 to 38 inch class.  The undulating hills and rugged rock “koppies” made for a beautiful setting under the clear South African skies.  No mater how spiritual the experience, it’s pretty nice to come back to wide beds, crisp clean cotton sheets, huge bathrooms, warm showers, and a bit of pampering safari goers have now got accustomed to in Africa.  In the evening after a fantastic dinner we would sit around talking and watch bush TV, which is what we call the campfire. 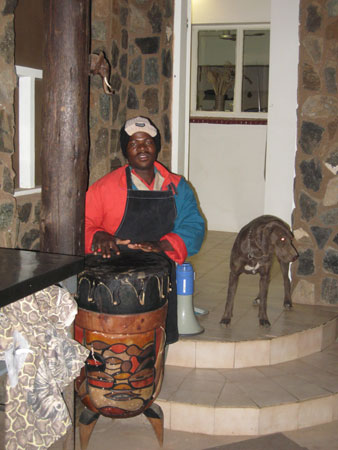 We enjoyed absolutely perfect weather while glassing the herds, but had yet to see the really impressive animal I had set my goal for on this safari.  I wanted to go home with a magical 40-inch plus sable and was prepared to go home empty handed if the opportunity did not present itself.  But isn’t that what trophy hunting is all about?

Finally on the seventh day we glassed a magnificent animal in the middle of a small herd.  His horns had a deep curve over his back and seemed to pointing to the next clearing.  He was the pride of the herd.  Jurie whispered to me, “That’s the animal we want Dick.”  We eased our way quietly out onto a rock promontory, to gain a better view.  Imagine our surprise when we found the herd immediately below us in a densely wooded copse as we peeked over the edge.  Watching intensely though my binoculars I tried in vain to find the magnificent bull we saw, the one with the long, deep, curved horns.  The herd began to meander through a small opening in the cover, making the sighting easier but identifying a specific animal was still difficult.

Suddenly, I spotted the graceful sable bull as he moved into the open.  Jurie and I slowly moved into position.  The bull moved into the next opening and stopped.  I slowly came to full draw placing my sight pin on the crease of his front shoulder and squeezed the trigger on my release.  I heard the “thunk” of the hit and watched the orange Bohning Blazer vane disappear above his front leg.  I held my breath trying to track my trophy though the brush as he kicked his heels and bolted into the cover.  All eyes were on the cover as we watched him run approximately 25 yards, then stiffen up and tip over like a boulder falling to the ground.

I jumped into the air and yelled ‘Thank you God, for your help on this hunt!” and we all walked over to my trophy.

He was a magnificent trophy and I couldn’t believe the length, mass and deep ridges in his horns.  Jurie shook my hand and said, “Dick he is easily over 40 inches and a trophy to be proud of for any hunter.”  I literally started shaking all over with excitement when I bent down and put my hands on his magnificent horns.  I couldn’t fit my hands around the bases of his horns and after quickly measuring them they were just over 10 inches and the length was over 42 inches.

Author with his magnificent Sable Antelope.

Adrenaline was coursing through my veins and my heart pounded as I realized what had just transpired during this hunt of a lifetime.  This hunt was in no way an easy hunt but I was successful because I persevered, did not give up on my goal and was willing to do the work by setting one foot in front of the other in my attempt to hunt the fabulous African sable.

Dick is also the author of three ground breaking books that will literally change the way you hunt.  They have had fantastic reviews in all the national magazines and are must reads for every hunter.  If you would like an autographed copy of Radical Bowhunter, Radical Bear Hunter or Spies in the Deer Woods please click on the links: And for the best in archery equipment, start your list by going to: Bohning Archery