There’s A Thrill On The Hill 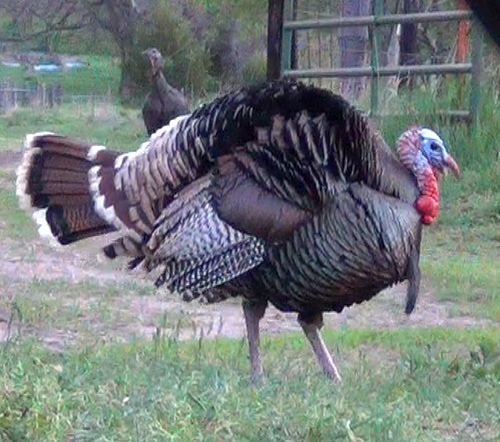 We knocked down some oatmeal, pop tarts, coffee and sweet rolls and fell out for the turkey woods on the hill above the ranch house and out buildings.  Sounds carry better on high places and we heard wild turkeys flying down from their roost trees a quarter mile away.

From this vantage point Fred and I had a much larger viewing area than we are used to and we watched them disperse in several directions. Some appeared to be interested in coming up the hill to where Fred and I waited in our Dark Horse blind. (This morning was my turn to shoot.)

It was almost too good to believe. A big longbeard walked into the farm road and approached the gate entrance. 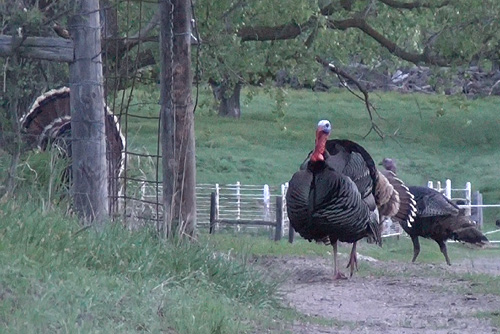 I checked new Cobra bowsight and my top pin was a vibrant green. Two other longbeard Strutters hurried along the fence toward the gate. The first longbeard puffed up his feathers and turned toward them. 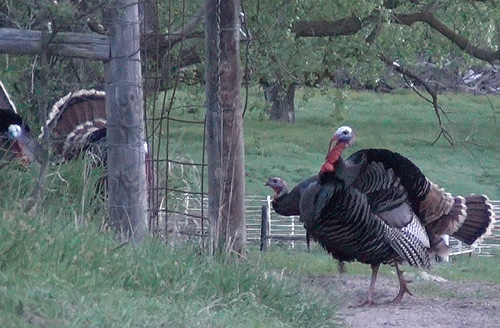 He blocked the advance of the two Strutters and they showed off for one another and zipped around their immediate area on the opposite side of the fence. 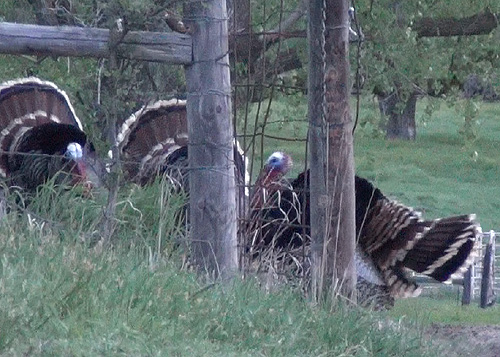 Meanwhile, other wild turkeys arrived at the entrance to the gate. One, a big Jake, saw our decoys and moved out toward them. 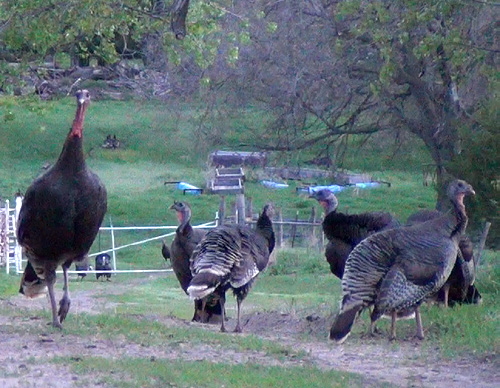 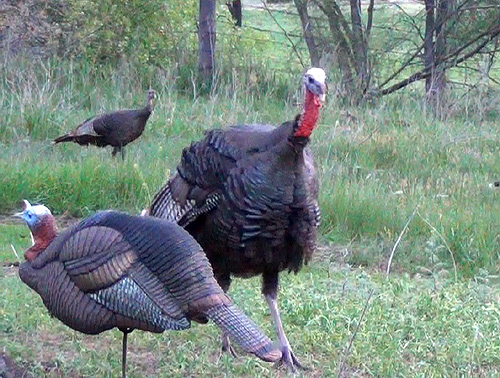 Back at the gate more Jakes and hens were coming in our direction. But my attention was on the two big Strutters walking into the open gateway. 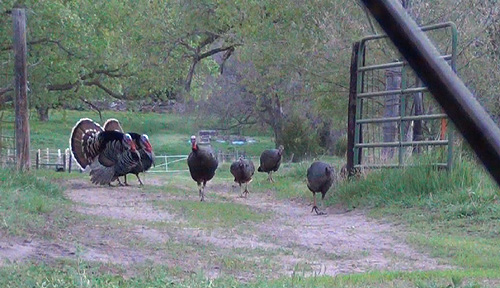 Just like a wise ol’ Tom should do, both Strutters stood and watched … and waited. 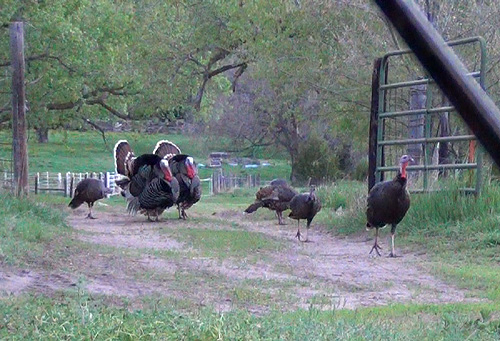 You can never second guess a mature gobbler, they can flake out at any moment. I waited, bow in hand, for then to decide what they were going to do.

At last they went on the move. The right way too. In short order they were in bow range. 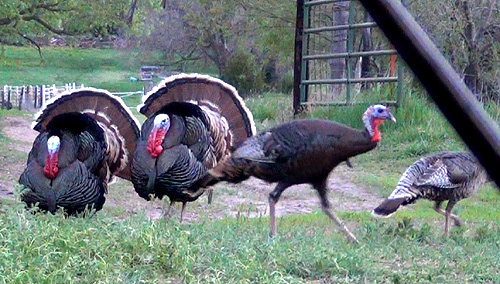 Now only 10 yards away the two Strutters were head on and I wanted to be certain they did not see any movement when I drew. So I pointed my arrow at the ground and started my draw.

Ooops! I couldn’t get my bow back all the way from that position. Carefully, I let down. The gobblers dropped strut and started toward the decoys. 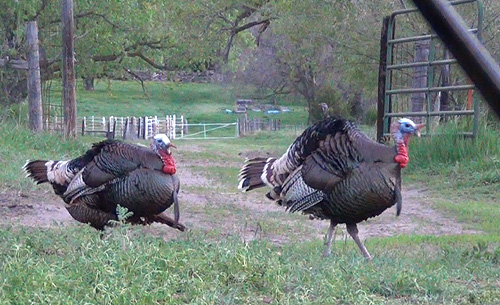 The the red headed duo strutted back up and closed in on Dave’s fine decoy. I took a deep breath to shake off thinking about not being able to draw my bow all the way. 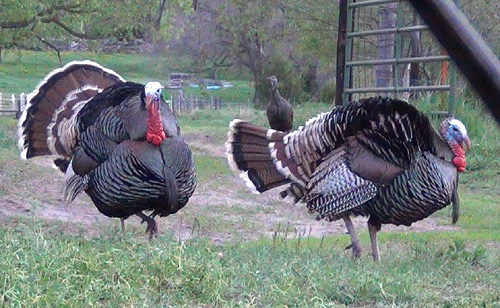 Oh oh, the lead Strutter stopped, dropped strut and turned around. Two things were wrong with this. 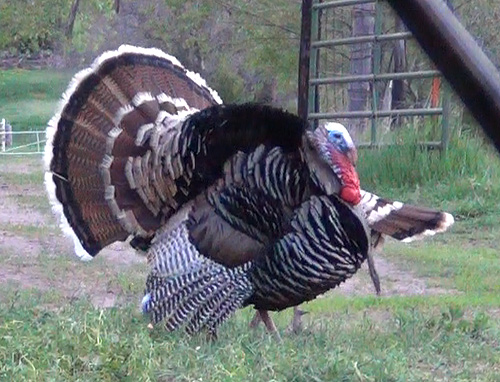 One, I didn’t know if that meant they would be making an exit or not. Two, I didn’t want to shoot both of them if I got a pass through. I decided to sort things out at full draw and did a quick draw McGraw that put my bowstring in the stops and my peepsight if front of my eye … and then focused all my attention on positioning the Cobra bowsight’s bright green top pin against the big Strutter’s body. 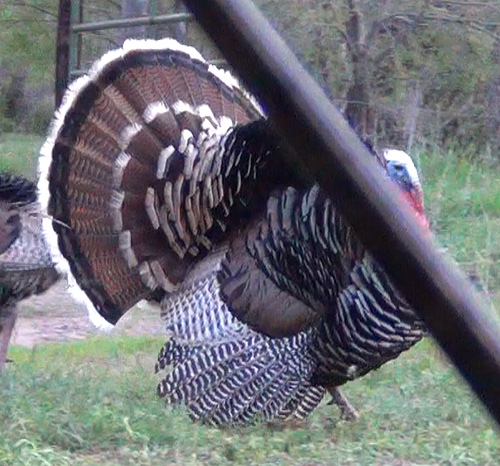 When he was clear of the other longbeard I touched the release’s trigger. And I heard that sound, the one us bowhunting wild turkey people live to hear. Thunk. 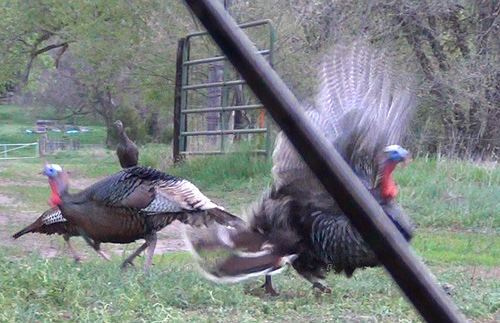 The Strutter tried to fly but couldn’t. Instead he did a wobbly walk to our right and I lost track of him in 40 yards when he got to where the hill dropped off sharply.