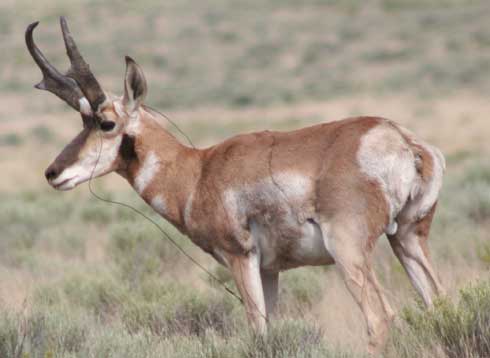 This great buck had some severe problem with barbed wire.

Sponsored by:  Dead Down Wind

As another long winter came to an end, I began planning for the new hunting year. I decided I would apply for as many hunts as I could here in New Mexico, a couple in Arizona, and hope to make a trip to Texas for a weekend of chasing whitetails. My success drawing over the previous few years had not been stellar, but I began the application process with renewed hope. This was the year I was going to draw them all and have to worry more about running out of vacation time to hunt than the freezer being empty by mid December!

I called my old buddy Rob Zabroky down in the Texas hill country. Rob had wanted to give “speed goat” hunting a try for some time. It had been a few years since I had hunted antelope, so it was about time to apply again. Rob was fired up about the opportunity and enthusiastically replied “Well heck yeah I want to apply”! I jumped online, hit the New Mexico Department of Game and Fish website, filled out the application and forwarded the information he needed to attach his entry. Now all we had to do was wait for the day of the draw and see if our name would be on the “Lucky list”.

June finally rolled around and it just happened that I was in Albuquerque right by the Game and Fish office the day the draw results were to be available. I pulled into the parking lot, waited for my turn and finally got up to the terminal. I entered my social security number and waited for the screen to pop up. A big green “SUCCESSFUL” beside the antelope application number meant it was time to call the Texan; we were going speed goat hunting!

The unit we had drawn was our third choice and a unit I had never hunted before. This would not only be Rob’s first antelope hunt but it would also be his first New Mexico hunt. That meant we needed to get some recon work done and we needed to do it soon. The draw occurs in mid June, and the antelope hunts start in early August. That did not give us much time to get organized and familiar with the unit and come up with a hunting strategy.

We started with the basics, securing BLM Land Status maps and aerial photography of the unit. This particular unit has a significant amount of public land and with only 25 tags issued for the hunt, we knew that we would not have too much traffic through whatever part of the unit we decided to hunt.

I made a couple of trips to the unit in July, spotting numerous large bucks and noting plenty of locations where we could work decoys and spot and stalk. As July came to a close and with two months of shooting every night at distances from 20 yards to 100 yards under my belt, we were ready to go.

Rob made the 11 hour drive from his house to mine two days before the hunt. The drive was the end of a very long day that started out for him in an airport in Washington for a flight home to San Antonio, then driving eleven hours through a monster summer storm to arrive at my house at 4:00 AM. After a short nap, we loaded up and headed for speed goat country, arriving at the boundary of our unit about 3 hours later.

We took a road that cut through the heart of the unit to Magdalena, New Mexico, where we would be staying. Along the 40 mile road, we saw numerous bucks. The next day was opening day and all indications were that we were going to be in for an event filled hunt. The land was dry and dusty but the stock tanks were full of water from a series of storms that had rolled through the unit a couple of weeks before. There was plenty of grass to eat and every antelope we saw was in great shape. All of the bucks we saw were off by themselves, indicating the rut was not in full swing yet.

We made it into town, unloaded in our room, grabbed some drinks and headed off for some evening scouting. On my two previous trips up there I had seen one buck in particular that I wanted Rob to see. While there were many trophy bucks in this unit, there was not any that could hold a candle to “Barry Bonds”.

We headed out of Magdalena and made it to the road where I had seen him. It didn’t take long to find him either. Standing less than 40 yards off of the road he was a majestic sight. We stopped and admired him for some time. I have been hunting long enough to know that an animal this big knows just as well as we do when opening day is. The day before the hunt they will stand there and taunt you but you better realize that tomorrow will be a different game. We watched him for about 20 minutes and then decided to head down the road to see what else we could find.

We spotted numerous bucks as we drove through the unit and about 10 miles down the road we came upon a strange sight, to say the least. As we rounded a corner in the road, we spotted a nice 15” plus buck standing right in the middle of the road. As we approached him we could tell something was not right with him. As he hobbled off of the road we could  see that he was tangled up in a big mess of barbed wire. We realized there was not much we could do for him that evening but quickly agreed that one of us should sacrifice our tag on him the next morning. We sure did not want to see a buck of this magnitude go to waste.

Rob jumped out of the vehicle, grabbed a number of large rocks and made a huge marker pile right on the edge of the road so we could find the spot the following morning. This was the beginning of one of the most comical hunts I have ever been part of.

As the day started to fade we turned around to head back to town. Now, for those of you that have never hunted antelope let me let you in on a little secret. An antelope is one of the most curious animals on the planet. If it was not for their blazing speed and eye sight that is rivaled by none, I am sure they would have long ago reached extinction levels from their curiosity induced stupidity. Remember that rock pile Rob had worked so hard on? Well, as we came back over that hill, there stood ole “Barbed Wire” inspecting Rob’s pile of rocks. His curiosity just wouldn’t let him walk off, tangled and hurt or not, without seeing what Rob had done.

Our driving over the hill startled him and he spun around to move off of the road as quick as his condition would allow. As he spun, that bundle of wire “hooked” on the rocks and almost tripped him. As he fell forward, his body weight and angle must have been just right to do the trick and he squirted right out of the wire, blasting off at 55 mph up the side of the hill. Rob’s attempt to make sure the buck did not go to waste had led to the old buck being freed from that mess of wire and living another day. More proof that our God is truly great and works in mysterious ways!

We made it back to the room, laughing all of the way at what we had just witnessed. Once there we laid out our gear and loaded what needed to be taken the next day. 4:00 AM would come early and we wanted no hitches on opening day.

We rolled out of the motel at 4:30 AM and headed toward the country we had driven through the evening before, with our HECS STEALTHSCREEN on and Dead Down Wind in hand. We saw numerous antelope in the morning, made a few stalks and blew just as many. About mid-day we headed down to see if we could spot Barry Bonds. I figured the chances were next to none, but we had to give it a try.

We had spent about 30 minutes glassing when I saw his horns sticking up where he laid about a mile away from the road. No doubt it was him. Not much cover between us and him and a stalk would mean about a mile of crawling through rattlesnake country. Rob quickly passed, offering rather to go sit up near a tank about 2 miles to the south and “Keep an eye on me”. I had to give it a go. Rob sprayed me down with Dead Down Wind and off I went.

I grabbed my Montana Decoy antelope buck decoy and Rob headed down the road. I gave him plenty of time to get out of the area and then started working my way across the desert. On occasion I would rise up far enough to check and make sure “Barry” had not moved. After about an hour I realized I was a little closer than I had figured. My range finder confirmed this, ranging him at 92 yards. There was not even a blade of grass for me to try to use for cover to take a shot where I was but there was a small bush a few yards in front of me to the right. If I could make it to that bush I might have all of the cover I needed.

Slowly and methodically I made my way to that bush. Once behind it, I got up on my knees staying as low as I could. I could draw and shoot over the bush but I needed to make sure he was looking straight away. Fact number two – an antelope has a 270 degree field of view. They have to be looking almost straight away from you to not see you move. They can see movement at 3 miles and can see you blink your eye at 300 yards. Their vision is one of their greatest defenses. I glassed him through the bush and made a startling discovery. He was asleep! How could I get so lucky? All I had to do as nock my arrow, rise up and drill him. I ranged him and he was 81 yards.

As I rose up, I realized he was bedded facing away from me at a pretty sharp angle. There was a slight opening to get the arrow in behind his ribs, but the slightest gust of wind could end up in a deflection off of his rib cage at the distance I was at. I noticed another bush a little closer to him and an angle that would give me a clear quartering away shot. I decided that since he was sleeping, I had plenty of time to get there.

I hit the ground and started crawling again. The second bush was about 25 yards away so it didn’t take me long to get there. The buck was still napping and had no idea I was there. I made it to the bush, pulled up my rangefinder and zapped him again. 61 yards and the perfect angle … all I had to do was nock my arrow and get down to business. Murphy time!

For complete Scent Control  always depend on: Dead Down Wind

For the Evolution of concealment always wear: HECS STEALTHSCREEN

There’s A Thrill On The Hill

There's A Thrill On The Hill